Warner Bros. Pictures has some great movies coming out this year! I am excited to see most of them (there are some that are not on this list – mostly the horror films that I don’t normally share about) This 2019 Preview will give you an overview of their animated, comedy, romantic, drama, and action movies. I will update the ones missing trailers, posters, etc as they come out. Which movie are you most excited to see?

THE LEGO® MOVIE 2: THE SECOND PART
In theaters on February 8
TheLEGOMovie.com 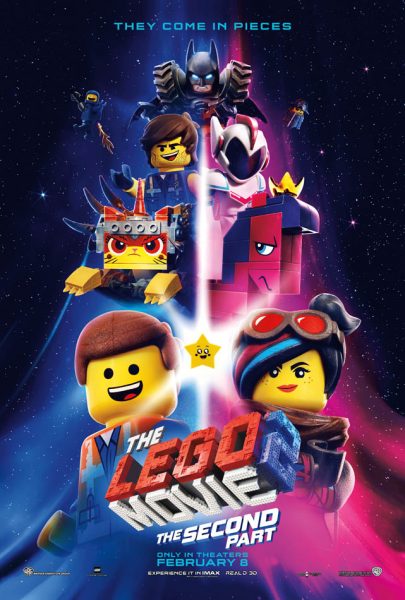 Animated Adventure. The much-anticipated sequel to the critically acclaimed, global box office phenomenon that started it all, “The LEGO® Movie 2: The Second Part,” reunites the heroes of Bricksburg in an all new action-packed adventure to save their beloved city. It’s been five years since everything was awesome and the citizens are now facing a huge new threat: LEGO DUPLO® invaders from outer space, wrecking everything faster than it can be rebuilt.

The battle to defeat the invaders and restore harmony to the LEGO universe will take Emmet (Chris Pratt), Lucy (Elizabeth Banks), Batman (Will Arnett) and their friends to faraway, unexplored worlds, including a strange galaxy where everything is a musical. It will test their courage, creativity and Master Building skills, and reveal just how special they really are. 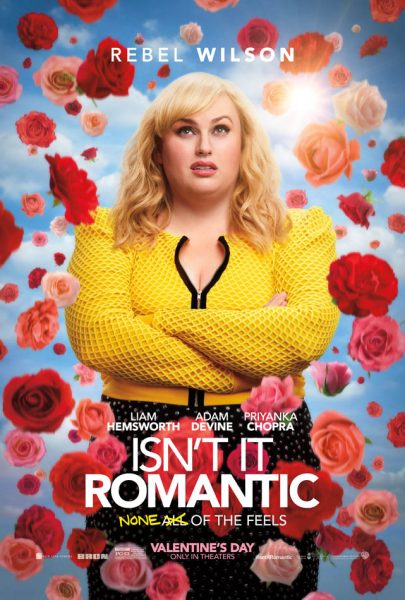 Romantic Comedy. New York City architect Natalie (Rebel Wilson) works hard to get noticed at her job, but is more likely to be asked to deliver coffee and bagels than to design the city’s next skyscraper.

And if things weren’t bad enough, Natalie, a lifelong cynic when it comes to love, has an encounter with a mugger that renders her unconscious, waking to discover that her life has suddenly become her worst nightmare—a romantic comedy—and she is the leading lady.

This film has been rated PG-13 for language, some sexual material, and a brief drug reference.

SHAZAM!
In theaters on April 5
ShazamMovie.com 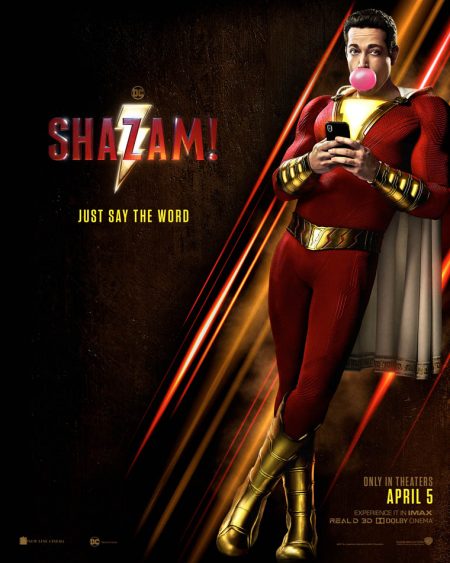 Action Adventure. We all have a superhero inside us, it just takes a bit of magic to bring it out. In Billy Batson’s (Asher Angel) case, by shouting out one word—SHAZAM!—this streetwise 14-year-old foster kid can turn into the adult Super Hero Shazam (Zachary Levi), courtesy of an ancient wizard (Djimon Hounsou).

Still a kid at heart—inside a ripped, godlike body—Shazam revels in this adult version of himself by doing what any teen would do with superpowers: have fun with them! Can he fly? Does he have X-ray vision? Can he shoot lightning out of his hands? Can he skip his social studies test? Shazam sets out to test the limits of his abilities with the joyful recklessness of a child. But he’ll need to master these powers quickly in order to fight the deadly forces of evil controlled by Dr. Thaddeus Sivana (Mark Strong). 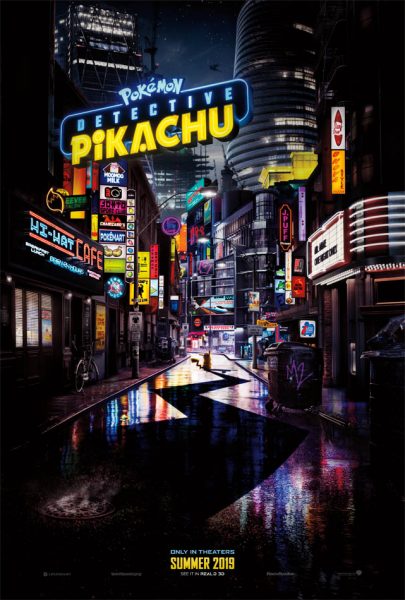 Comedy Adventure. Ryan Reynolds stars in the first-ever live-action Pokémon adventure as Pikachu, the iconic face of the global Pokémon phenomenon—one of the world’s most popular, multi-generation entertainment properties and the most successful media franchise of all time. The story begins when ace detective Harry Goodman goes mysteriously missing, prompting his 21-year-old son Tim (Justice Smith) to find out what happened.

Aiding in the investigation is Harry’s former Pokémon partner, Detective Pikachu (Ryan Reynolds): a hilariously wise-cracking, adorable super-sleuth who is a puzzlement even to himself. Finding that they are uniquely equipped to work together, as Tim is the only human who can talk with Pikachu, they join forces on a thrilling adventure to unravel the tangled mystery.

Chasing clues together through the neon-lit streets of Ryme City—a sprawling, modern metropolis where humans and Pokémon live side by side in a hyper-realistic live-action world—they encounter a diverse cast of Pokémon characters and uncover a shocking plot that could destroy this peaceful co-existence and threaten the whole Pokémon universe.

THE SUN IS ALSO A STAR
In theaters on May 17
Director: Ry Russo-Young

Romantic Drama. “What if I told you I could get you to fall in love with me…?” College-bound romantic Daniel Bae (Melton) and Jamaica-born pragmatist Natasha Kingsley (Shahidi) meet—and fall for each other—over one magical day amidst the fervor and flurry of New York City. Sparks immediately fly between these two strangers, who might never have met had fate not given them a little push. But will fate be enough to take these teens from star-crossed to lucky in love? With just hours left on the clock in what looks to be her last day in the U.S., Natasha is fighting against her family’s deportation as fiercely as she’s fighting her budding feelings for Daniel, who is working just as hard to convince her they are destined to be together. A modern-day story about finding love against all odds, “The Sun Is Also a Star” explores whether our lives are determined by fate or the random events of the universe.’ 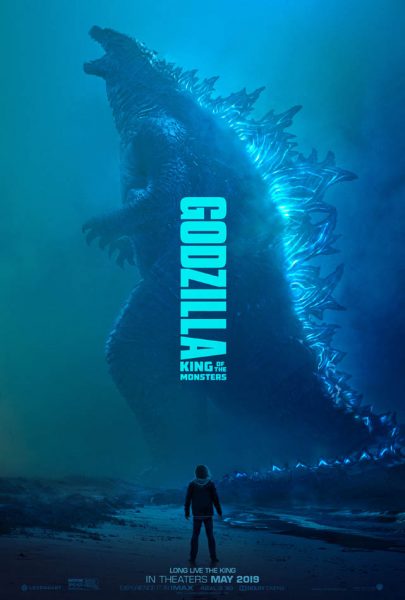 Action Adventure.  The new story follows the heroic efforts of the crypto-zoological agency Monarch as its members face off against a battery of god-sized monsters, including the mighty Godzilla, who collides with Mothra, Rodan, and his ultimate nemesis, the three-headed King Ghidorah. When these ancient super- species—thought to be mere myths—rise again, they all vie for supremacy, leaving humanity’s very existence hanging in the balance.

This film has been rated PG-13 for sequences of monster action violence and destruction, and for some language.

Action Comedy. “Shaft” is the next chapter in the film franchise featuring the coolest private eye on any New York City block. JJ, aka John Shaft Jr. (Usher), may be a cyber security expert with a degree from MIT, but to uncover the truth behind his best friend’s untimely death, he needs an education only his dad can provide. Absent throughout JJ’s youth, the legendary locked-and-loaded John Shaft (Jackson) agrees to help his progeny navigate Harlem’s heroin-infested underbelly. And while JJ’s own FBI analyst’s badge may clash with his dad’s trademark leather duster, there’s no denying family. Besides, Shaft’s got an agenda of his own, and a score to settle that’s professional and personal. 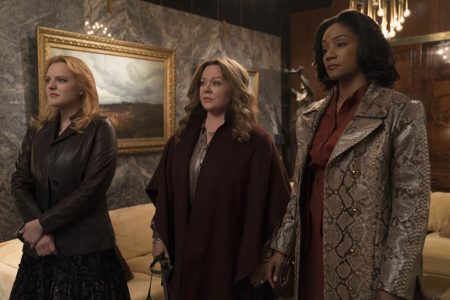 Mob Drama. Based on the Vertigo comic book series from DC Entertainment, the film stars Oscar nominee Melissa McCarthy, Tiffany Haddish and Elisabeth Moss as three 1978 Hell’s Kitchen housewives whose mobster husbands are sent to prison by the FBI.

Left with little but a sharp ax to grind, the ladies take the Irish mafia’s matters into their own hands—proving unexpectedly adept at everything from running the rackets to taking out the competition…literally.

JOKER
In theaters on October 4
Director: Todd Phillips
Cast: Joaquin Phoenix, Robert De Niro, Zazie Beetz, Bill Camp, Frances Conroy, Brett Cullen, Glenn Fleshler, Douglas Hodge, Marc Maron, Josh Pais, Shea Whigham
Drama. “Joker” centers around the iconic arch-nemesis and is an original, standalone story not seen before on the big screen. The exploration of Arthur Fleck (Joaquin Phoenix), a man disregarded by society, is not only a gritty character study, but also a broader cautionary tale.
SUPERINTELLIGENCE
In theaters on December 25
Director: Ben Falcone
Cast: Melissa McCarthy, Bobby Cannavale, Brian Tyree Henry, Jean Smart and James Corden
Romantic Comedy. Nothing extraordinary ever happens to Carol Peters (McCarthy), so when she starts getting snarky backtalk from her TV, phone and microwave, she thinks she’s being punked. Or losing her mind. In fact, the world’s first superintelligence has chosen to study and observe Carol’s attempt to romantically reconcile with her former boyfriend to better understand the human condition. Soon, the all- powerful entity takes over her life…with ominous plans to possibly take over the world. Now, Carol is potentially humanity’s last chance before this AI-with-an-attitude decides to pull the plug.

The House of Stone and Ivy by Anita Stansfield
Next Post: Captain Marvel Character Posters