You are here: Home / Entertainment / Disney / “The Little Mermaid” Dives Into the Walt Disney Signature Collection – Enter to win a digital copy

One of my favorite movies of all time is now part of the Walt Disney Signature Collection! Disney’s “The Little Mermaid” is now available on Digital, 4K Ultra HD, and Movies Anywhere and will be available on 4K Ultra HD and Blu-ray™ on Feb.26! Get it on MoviesAnywhere.com, in-stores and online! 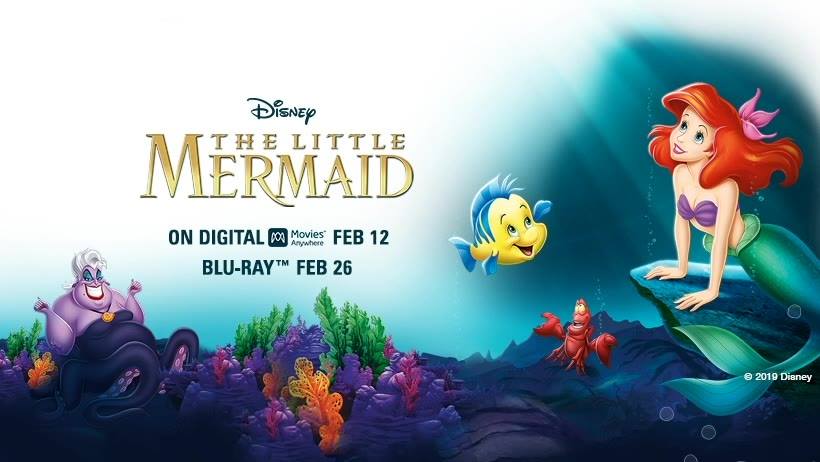 For the first time ever in sparkling 4K Ultra HD and featuring a fin-tastic sing-along mode along with over 45 minutes of exciting new bonus features for new and old fans alike to enjoy.

In honor of its 30th anniversary, two-time Academy Award®-winner (Best Original Score and Best Original Song “Under the Sea,” 1989) “The Little Mermaid,” dives into the highly celebrated Walt Disney Signature Collection with all-new bonus features and a sing-along mode.

The magical, musical tale of mermaid princess Ariel—along with loveable side kicks Sebastian and Flounder, and the love-to-hate sea witch Ursula—is shore to make a splash with all generations when it comes home for the first time Digitally in HD, 4K Ultra HD, and Movies Anywhere on Feb. 12, and on 4K Ultra HD and Blu-ray™on Feb. 26.

The Signature Edition of “The Little Mermaid” showcases its award-winning musical score and iconic songs such as “Under the Sea” and “Part of Your World” with a sing-along mode allowing you to accompany this beloved cast of characters on their journey.

Never-before-seen bonus features bring legendary composer Alan Menken and some of Disney’s most recognizable leading ladies together around a piano to reminisce, sing and celebrate “The Little Mermaid.”

The latest installment of “Stories from Walt’s Office” compares Walt and Ariel’s love of collecting treasures. Viewers will also receive an inside look at the “The Little Mermaid” cast in their original recording sessions, explore hidden treasures and fun facts from the film, and enjoy a special performance of “Part of Your World” by a cappella singing sensation DCapella. Plus, fans will have access to hours of additional classic bonus features!

Based on Hans Christian Andersen’s classic fairy tale about a beautiful mermaid princess who dreams of becoming human, “The Little Mermaid” was directed by John Musker and Ron Clements (“Aladdin”).

The film was originally released in theaters on Nov. 15, 1989, and is the 28th film from Walt Disney Animation Studios, and the first in what many described as a new Disney animation renaissance.“The Little Mermaid” is the seventh title to join the Walt Disney Signature Collection, which includes groundbreaking films created or inspired by the imagination and legacy of Walt Disney, featuring timeless stories and characters that have touched generations. The film takes its place alongside “Snow White and the Seven Dwarfs,” “Beauty and the Beast,” “Pinocchio,” “Bambi,” “The Lion King” and “Lady and the Tramp.”

*Bonus features may vary by retailer

We are excited to offer a giveaway for a DIGITAL COPY of Disney’s The Little Mermaid Anniversary Edition (Signature Collection). This is open to US. Must be 18 or older. Sweepstakes will run from 2/12/19 through 2/19/19. This contest is not endorsed or sponsored by Facebook, Twitter, Pinterest, Google or any other social media. The winner will be chosen using Random.org. The winner will be contacted via email. The winner is responsible for contacting me within 24 hours, or a new winner will be chosen.  Prizing provided by Disney.