You are here: Home / Reviews / Giveaway / Scooby-Doo! And the Gourmet Ghost DVD Giveaway

We received a copy for review. All opinions are my own. Scooby-Doo! And the Gourmet Ghost is coming out on DVD 9/11/18! We love Scooby-Doo and have been excited to see another adventure from him and the Mystery Inc. gang! This new show is classic Scooby-Doo! with a lot of fun and I very much enjoyed Bobby Flay and Giada De Laurentiis since they are two of my favs to watch on TV. This is a fun watch for the whole family and one you need to add to your collection! 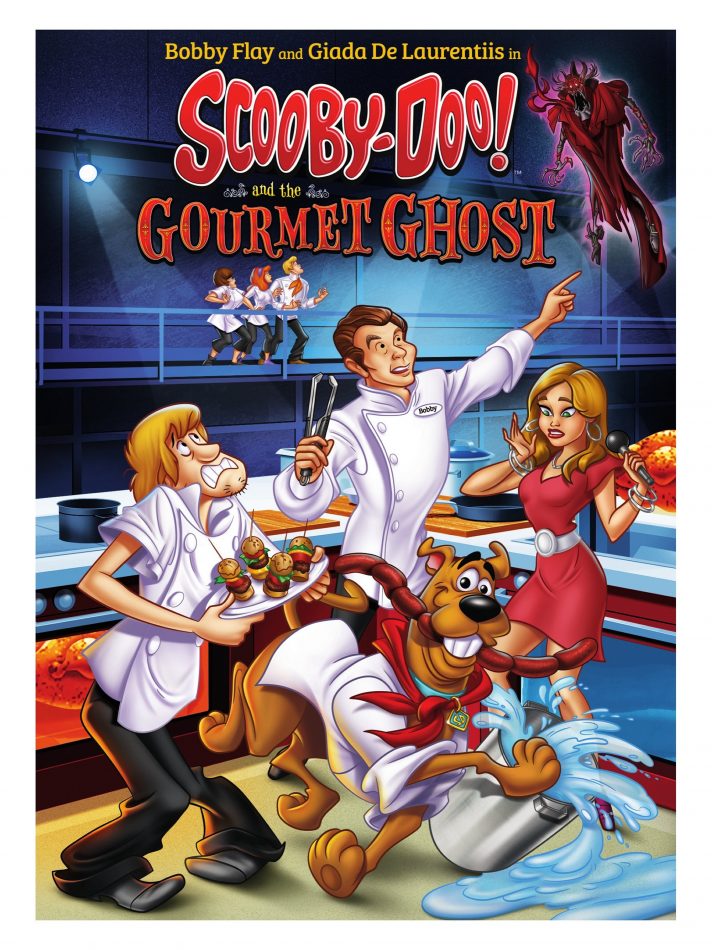 Everyone’s favorite Great Dane is back for an all-new, action-packed, culinary mystery adventure with the release of Scooby-Doo! And the Gourmet Ghost, available in stores September 11, 2018 from Warner Bros. Home Entertainment.

Featuring the voice talents of internationally acclaimed celebrity chefs, Bobby Flay (Beat Bobby Flay), Giada De Laurentiis (Giada in Italy) and Marcus Samuelsson (Chopped), Scooby-Doo! And the Gourmet Ghost takes our favorite teen sleuths on an unforgettable adventure to New England, where they investigate the haunting of a historic colonial inn that’s been turned into a state-of-the-art, culinary resort.

On Scooby-Doo! And the Gourmet Ghost, the Mystery Inc. gang visits Rocky Harbor Culinary Resort, a new cooking retreat located in New Port Cove, Rhode Island. It’s a food lover’s destination, where visitors can learn to prepare meals like master chefs. As Scooby-Doo and his pals arrive to the resort, they are met by Fred’s uncle Bobby, who happens to be the world-famous chef and restauranteur Bobby Flay.

Rocky Harbor Culinary Resort, which was originally known as Rocky Harbor Inn, has stood empty for over two centuries, ever since its original owner mysteriously disappeared from its premises. The property, which is now owned by Bobby, is rumored to be haunted by the infamous Red Ghost. Bobby however, thinks the legend of the Red Ghost is just an old myth that’s part of the local lore. He hesitates bringing up the subject for fear it might scare off potential visitors to this new resort, which he dreams will become a world-famous gourmet cooking destination.

To promote the grand opening of the resort, Bobby organizes a live, national telecast to broadcast from the retreat’s high-tech kitchen. It’s a star-studded evening with some of television’s biggest celebrity chefs, including renowned chefs Giada De Laurentiis and Marcus Samuelsson.

The telecast kicks off with a bang! Bobby’s kitchen buzzes with celebrity chefs whipping up their most scrumptious dishes. That’s until the lights mysteriously flicker off and out of the shadows, Red Ghost appears frightening all the guests, who run out in a panic. Is the legend of Red Ghost real after all? Does this mean the end of Rocky Harbor Culinary Resort or will Scooby-Doo and his pals help save the day? It’s a delicious mystery Scooby-Doo! fans won’t want to miss!

Scooby-Doo! And the Gourmet Ghost features the familiar voice talents of Frank Welker as Scooby-Doo/Fred Jones, Grey Griffin as Daphne Blake, Matthew Lillard as Shaggy Rogers and Kate Micucci as Velma Dinkley. The film was executive produced by Sam Register, written by Tim Sheridan and directed by Doug Murphy.

Do you want to win a copy? Here is how you can enter. Just wait for the Rafflecoptor to load below. This is open to US. Must be 18 or older. Sweepstakes will run from 9/13/18 through 9/20/18. This contest is not endorsed or sponsored by Facebook, Twitter, Pinterest, Google or any other social media. The winner will be chosen using Random.org. The winner will be contacted via email. The winner is responsible for contacting me within 24 hours, or a new winner will be chosen. Prize is provided by Warner Bros.. Lovebugs & Postcards and Daddy by Day are not responsible for prize fulfillment. Good Luck!