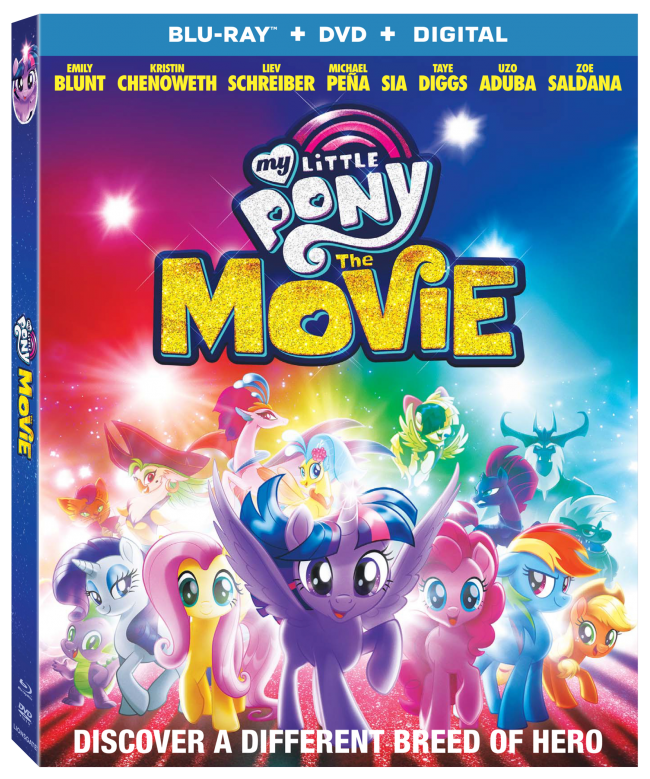 We received a copy for review. All opinions are my own. For as long as I can remember, I have been a fan of My Little Pony. Since my girls have started watching the new series, I have really grown to love the show and the characters in it. Spike along with Twilight Sparkle, Rainbow Dash, Pinkie Pie, Applejack, Fluttershy, and Rarity always have a fun adventure to go on and a great lesson to teach. The My Little Pony: The Movie is the same way and is cute for all ages to watch. I am excited to be offering a copy of the movie as well as a couple of fun MLP toys in this giveaway thanks to Lionsgate.

When a dark force threatens Ponyville, the Mane 6 go on a journey beyond Equestria to save their beloved home and they meet new friends and exciting challenges along the way.

Directed by “My Little Pony” veteran Jayson Thiessen (“My Little Pony: Friendship Is Magic”) and including original music and songs performed by Sia, Taye Diggs, Zoe Saldana, Kristin Chenoweth, and Emily Blunt, My Little Pony: The Movie is full of music, fun, and laughter for the whole family. The My Little Pony: The Movie Blu-ray and DVD include all-new special features, including a deleted scene, a music video, three featurettes starring the Mane 6, an exclusive Equestria Girls Short and a Hanazuki short, and will be available for the suggested retail price of $29.95 and $39.99, respectively.

Here is the trailer 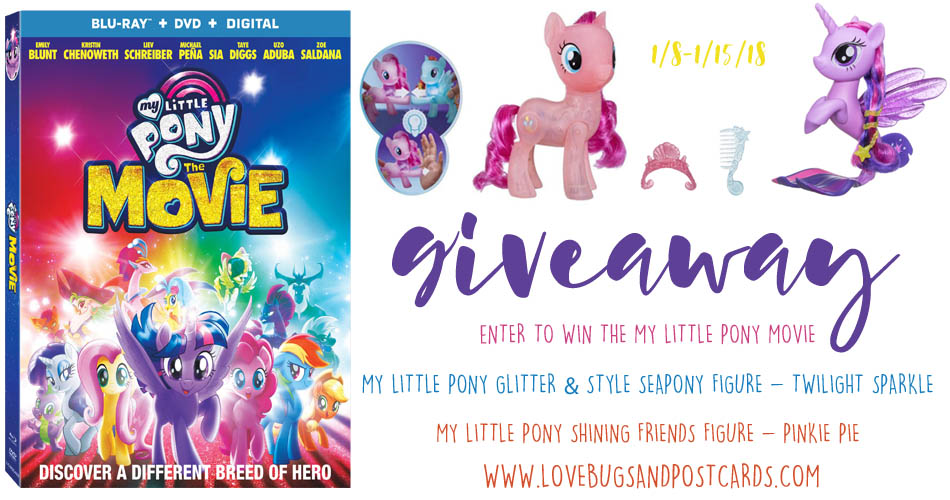 We are excited to giveaway:

My Little Pony The Movie Blu-ray of Movie

Join the “truly magical adventure” (Mike Reyes, CinemaBlend) of the Mane 6 and their new friends when My Little Pony: The Movie comes home on Digital December 19 and on Blu-ray™ Combo Pack (plus DVD and Digital), DVD, and On Demand January 9 from Lionsgate. Best friends Twilight Sparkle, Rainbow Dash, Pinkie Pie, Applejack, Fluttershy, and Rarity team up in their most epic adventure yet!

“Twilight Sparkle is undersea stylin’! Inspired by My Little Pony the Movie, this 6-inch Twilight Sparkle seapony figure has a beautiful mermaid-like tail and her signature cutie mark on her back fin. Her eyes and wings are detailed with glitter! Keep the stylin’ fun going with her long, colorful hair and underwater-themed accessories, too.”

“Pinkie Pie loves to laugh and have fun! Light up playtime with the My Little Pony Shining Friends Pinkie Pie figure. Give her a high five and watch her glow. It’s fun to pretend the power of friendship creates the light! When the Pinkie Pie and Rainbow Dash figures are together, kids can play out scenes where they share friendship moments — when these 2 pony figures “”hoof-bump,“” their lights shine, too!”