Today I get to share with you the interview I was able to be a part of with Carlos Pratts, Hector Duran, Sergio Avelar, Johnny Ortiz, Rafael Martinez, Michael Aguero and Ramiro Rodriguez. These boys are amazing! You can read our other interviews from McFarland, USA with Kevin Costner, and the real life Jim White – Danny Diaz – David Diaz – and Damacio Diaz.

I am so excited that McFarland, USA opened at #4 this weekend and was the #1 new opener this weekend in North America. That is AMAZING! It is such a great movie. Everyone needs to see it and be inspired and uplifted by the amazing message! 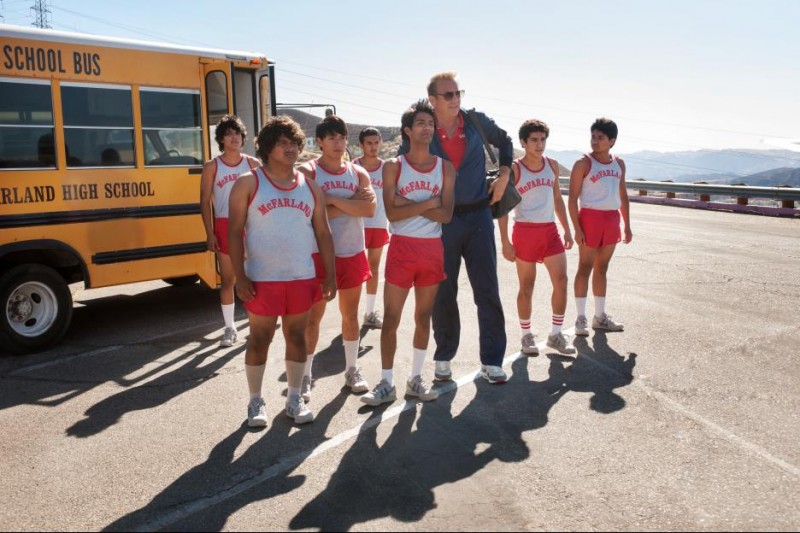 McFarland, USA is packed with humor that made you laugh through the whole movie. There are a few emotional parts where you will want tissues as well. McFarland USA is a great film for your entire family. It is rated PG. I took my 3 and 5 year olds, as well as my 7 and 10 year olds and they all loved it. My older kids got all of the jokes, but it was entertaining enough to keep the attention of my younger kids, and my son (5 year old) followed the whole movie. It has a great storyline with an amazing theme. Heart, dedication and faith are three major factors that bring this film to life. (read the rest of our McFarland, USA film review here)

The 7 actors that played the cross country team in McFarland, USA are all amazing young men. They have a great chemistry on and off screen and really made us all laugh. I hope them many amazing things ahead. It was a great experience to interview them. 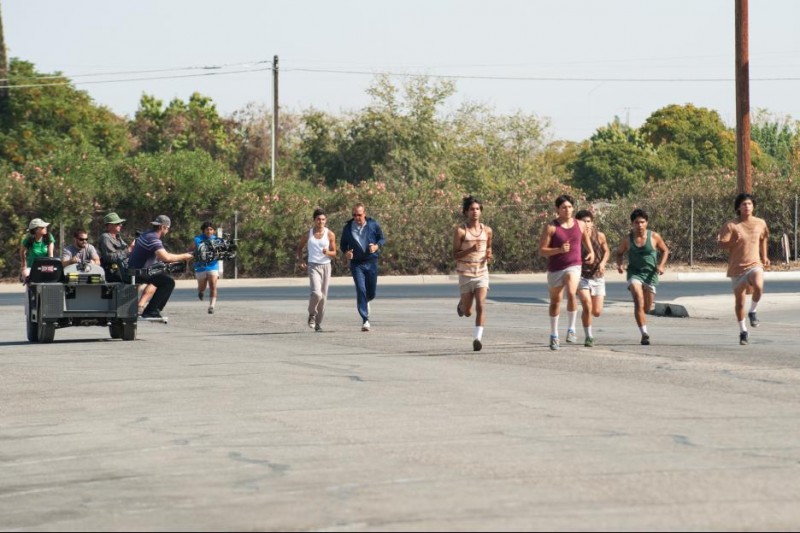 FUN FACT – Three out of the seven young actors on the team in the movie are from the McFarland area—Sergio Avelar who plays Victor Puentes and Michael Aguero, cast as Damacio Diaz, are actual runners and Ramiro Rodriguez, as Danny Diaz, was a champion soccer player.

Ramiro Rodriguez had no intention of auditioning when he agreed to drive his cousin to the casting tryouts for “McFarland, USA.” He landed the role of Danny Diaz after being pestered repeatedly by executive producer Mario Iscovich to audition. 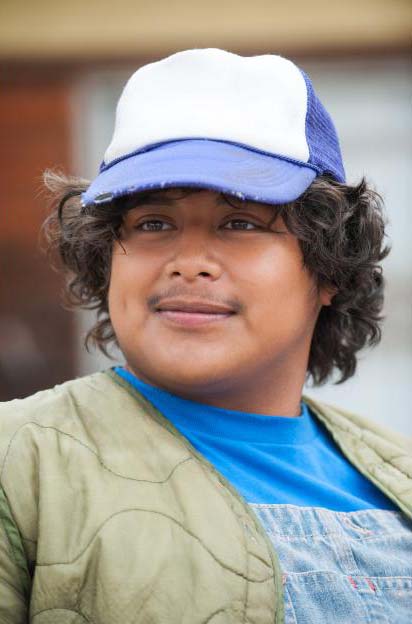 QUESTION    :    So for three of you [Ramiro Rodriguez, Michael Aguero and Sergio Avelar] you are there and this is a story of your town, what is it like for you?   And what is the reaction from the community around you?

FUN FACT – Sergio Avelar is a bona fide runner and a member of the McFarland Track Club. He has been running since 2001 and considers himself a “decent runner.” One of 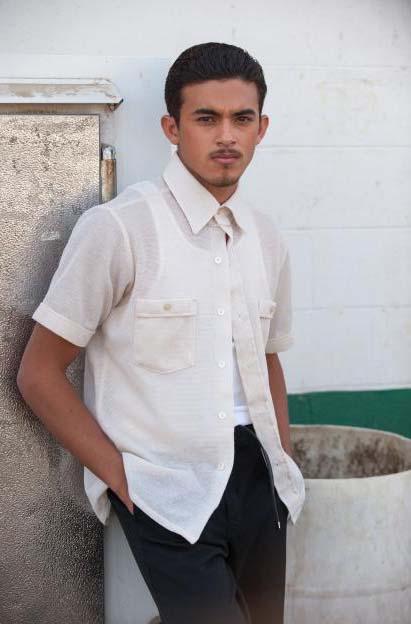 QUESTION    :    So for three of you [Ramiro Rodriguez, Michael Aguero and Sergio Avelar] you are there and this is a story of your town, what is it like for you?   And what is the reaction from the community around you?

SERGIO AVELAR   :    Now people are actually kind of proud saying that they’re from McFarland.  Back then it was ‘Where are you from?’  ‘I’m from McFarland.’  ‘Where’s that at?’  ‘Oh, you know, between Bakersfield and Visalia.’  ‘Oh, that town that smells likes cows?’  [LAUGHING.]  That’s what we were known for but now people are so proud and now if someone asks them ‘where are you from?’ and they say ‘McFarland’, we’re just a joke that people would be like ‘man, they’re not going to believe you now.’ It’s a movie. [LAUGHING.]  It’s so crazy, it’s truly a blessing.

FUN FACT – The production took the cast and crew to some of the most beautiful spots in Southern and Central California, from Lake Castaic to Malibu to the Griffith Park Observatory, in addition to the fields and neighborhoods of Bakersfield and McFarland. There were some unique cinematic opportunities in the filming of the movie, especially the embankments of almonds covered in protective plastic that served as training hills for the team. The expanse of these weird mounds across the landscape was visually arresting and certainly emblematic of McFarland, home to Blue Diamond Almonds. 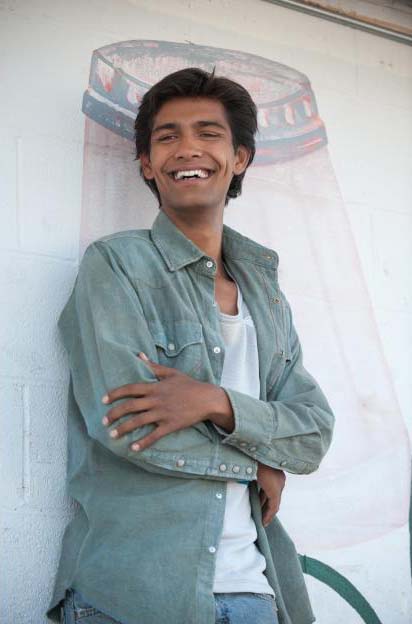 QUESTION:  Michael, I think I read that you had never been to the ocean before?  So how is it filming that scene?   I mean, it was all real for you, and it was cold that day?

Michael Aguero   :    It was a fun beach trip until he said ‘everyone go run in the water’.  [LAUGHING.] We’re sitting here and bear in mind, tank tops and booty shorts. Everybody jumps in the water and it’s like pins and needles, just all through your legs, all through your body.  They said ‘you’re getting more used to it’.   No, you don’t.  [LAUGHING.]  We have to do that right now? It was a very fun experience in that moment.

So this film is very important to me for people to be able to see around the world that we are the people that are going to be performing in this film and be showing people from Mexico, from Salvador, telling these people he can make it.  Why can’t they do it? And this is very important because we’re all family.   It’s a very inspirational film and what I want people to take away from it is motivation, dedication, inspiration, and anything’s possible. 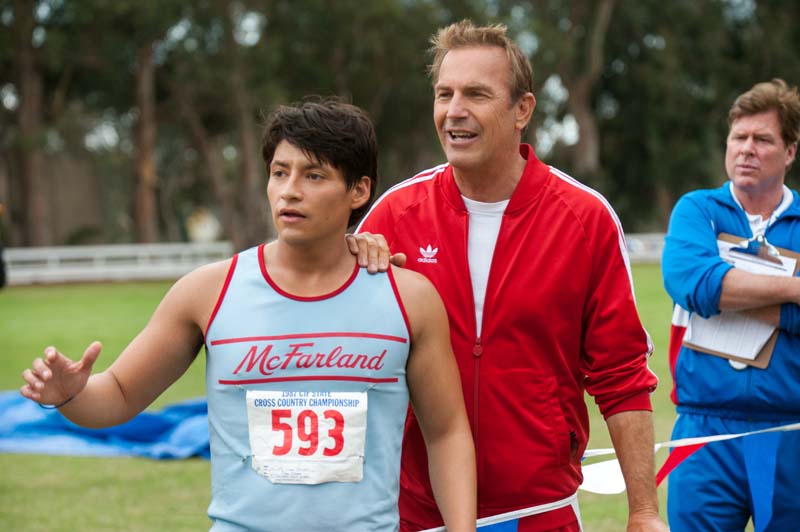 FUN FACT – In the script, the character Thomas Valles, played by Carlos Pratts, is a natural runner with prodigious talent. But the reverse was true for Pratts, who zealously prepared for the cross-country scenes and in the process, became a runner. In addition to drills with the film’s running coach, Mark Ellis, Pratts worked out with personal trainer Brian Nguyen. Nguyen famously got Mark Wahlberg into boxing shape for “The Fighter” and did likewise for Pratts. 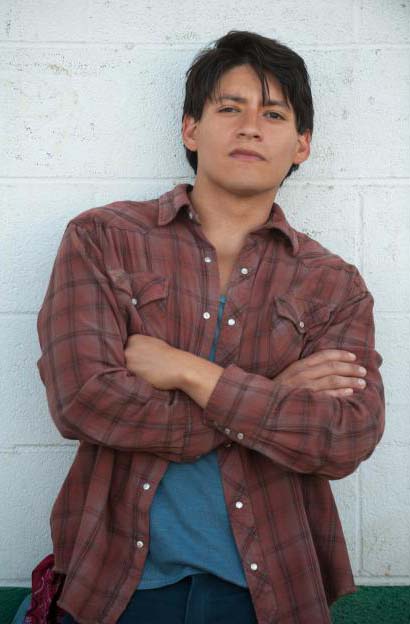 QUESTION    :    Carlos, how was this movie different for you?

CARLOS PRATTS   :    Doing a movie’s so different then TV shows in the sense to where it’s so fast.  TV’s very fast and you have 60 pages when you shoot a pilot, so you don’t know where your character’s gonna go, but when you do a movie, you have a beginning, middle and end.  So within these 120 pages, I create my arc.  You have a lot of trust in the script and then you get to explore.  I think you have a little more confidence in whatever you’re doing in the film, as opposed to TV, you just have no idea. You shoot the pilot.  They tell you a little bit, and then the scripts start going.  Then basically chemistry and what’s happening with the actors.  Your character develops or, or dies.  [LAUGHING.] 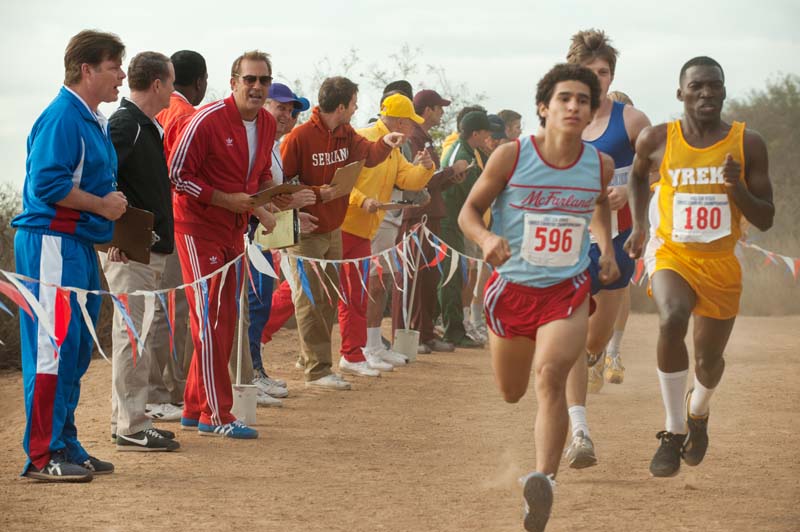 FUN FACT: Like the real McFarland team, all seven young actors had to train to become champion runners. Although some had more track and field experience than others, all of them took their drills very seriously. Mark Ellis, the coach hired to train them for the film, would have it no other way and the team evolved over time. But training them wasn’t as simple as merely putting shoes on their feet. Every morning at 8 a.m. the runners showed up for practice, which was literally running and more running to build up endurance. 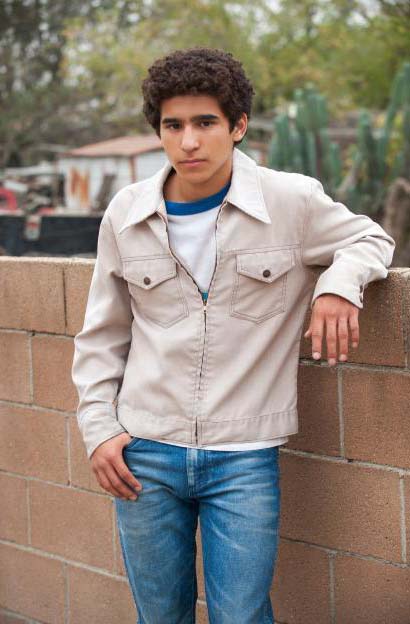 Q    :    How much running did you guys actually do for the movie and were all the running scenes filmed at the same time?

Hector:    We did a lot more running than you see in the film, because we had to train for the whole month.  Every single day we would run 5 or 6 miles as a warm up, and then we would have to do a lot of training.  When we were filming the amount of takes we did and the amount of running and different angles and everything amounted to more than the actual 5K race that would be in the film.  So I guess we ran a lot more than you think. 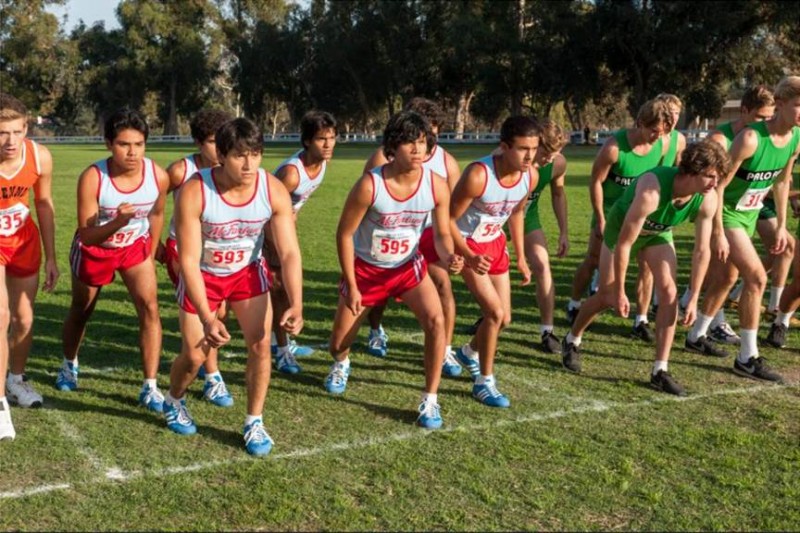 FUN FACT – A number of the original runners on the championship 1987 cross-country team became educators in the McFarland school district. The former teammates are not only working in their hometown, but also raising their families there and actively supporting the cross-country teams of today by coaching, helping out with the meets and practices and donating goods or money so the teams have what they need. 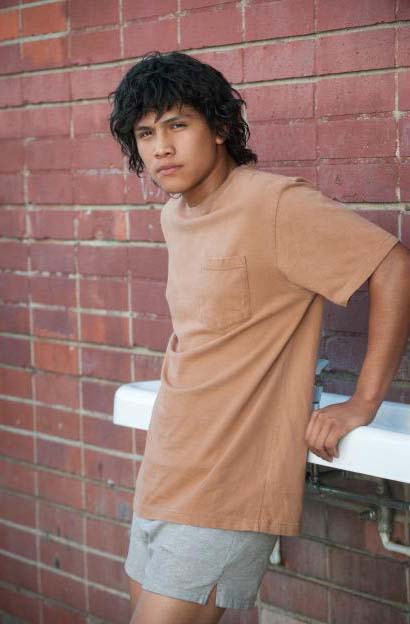 QUESTION    :    What’s the most influential real life lesson that you took from this movie? 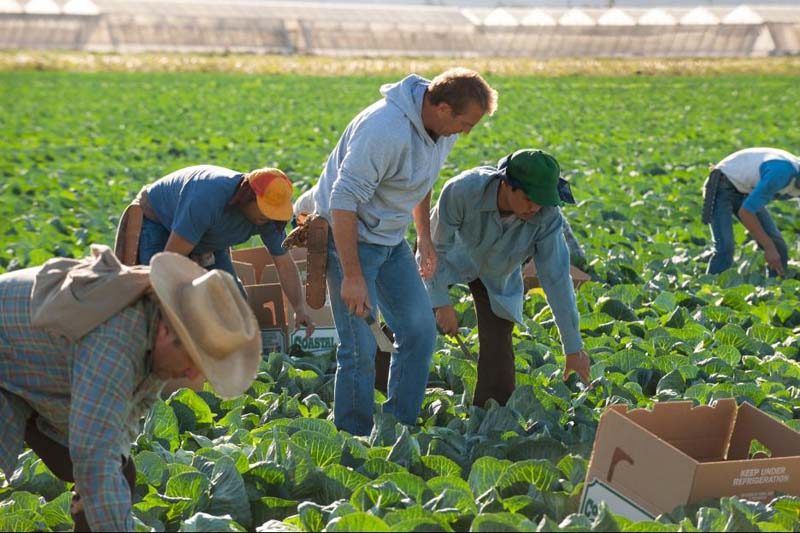 Kevin Costner and others picking in the fields in McFarland, USA

FUN FACT – Actor Rafael Martinez, who is by nature soft-spoken and polite, admits that he cut school in order to audition for the movie. Needless to say, having won a role, he has no regrets. 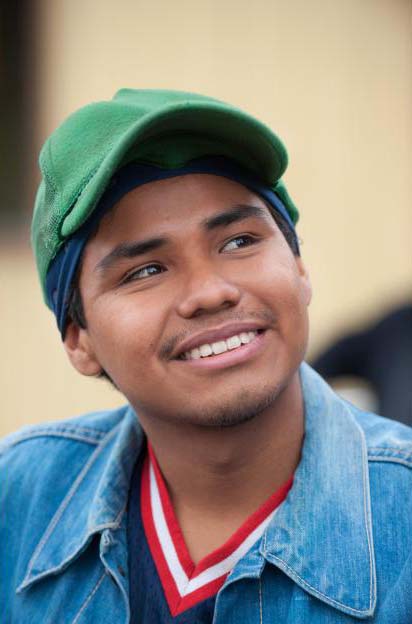 RAFAEL MARTINEZ:    I want to say I know what I’m going to do next and what’s next for me, but I’ll be very honest.  I don’t really know.  [LAUGHING.] I mean, you might think I have my life figured out ’cause I’m part of this amazing story with these amazing people, and Disney, this whole thing, and, but dang, I don’t really know.  I’m really trying to figure it out as we go along, and I don’t really understand too much ahead of me.

After the interview we were able to take a picture with the guys. They were laughing and having fun the whole time. 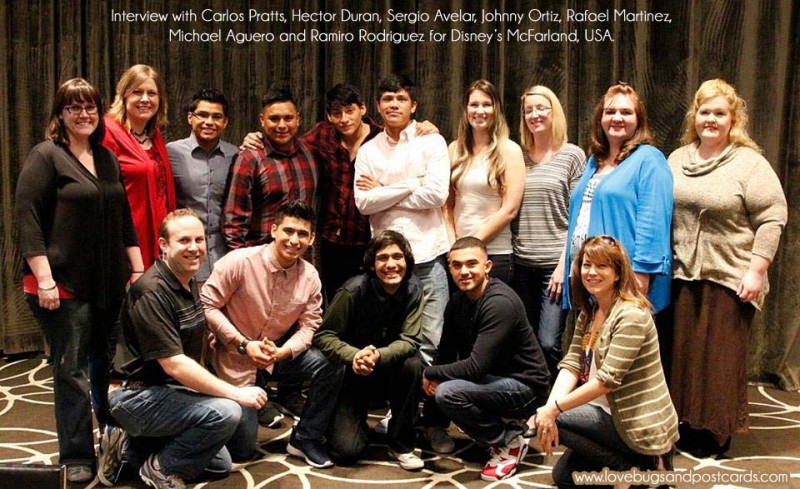 McFarland came out in Theaters last weekend so go see it with you entire family!

I didn't get a chance to see it yet but I've heard great things about it.

We were all set to see it last night, but Spongebob won the vote. This weekend for sure though!

I have heard so many good things about this movie and the actors just sound like they are awesome! I can't wait to check it out!

sounds like you liked it and had fun. thanks for sharing!

I am typically not into sports movies, but the storyline on this one looks great. I'm going to have to see it now :)