Dora the Explorer: Dora in Wonderland came out on DVD this month! This movie is so cute. My kids love Alice in Wonderland and loved this remake. They did such a great job and the adventures are as fun as ever. It is a double-length show (which is about an hour) and there is also another episode of Dora The Explorer called “Book Explorers” that has never been released on on DVD before!

View the Dora The Explorer: Dora in Wonderland Trailer here to see a small preview of this movie.

When Abuela’s kitties run through a magic mirror, Dora, Boots and all their friends travel through the magical, mixed-up world of Wonderland to catch up to them. Then, in another never-before-released on DVD episode, Dora and Boots lend a hand to friends like Peter Pan, Dorothy and Little Red Riding Hood.  And as an added bonus, the DVD will include a Dora the Explorer Paper Doll with different clothes inside for a limited time only. Created by Nickelodeon Home Entertainment and distributed by Paramount Home Media Distribution.

This show is a great retelling of the classic story that really brings it down to a kids level. Through out the movie they talk in both English and Spanish true to the Dora The Explorer tradition, and they work through the problem with a goal and steps to get there. It is a great show for kids of all ages. My kids loved both shows on the DVD. 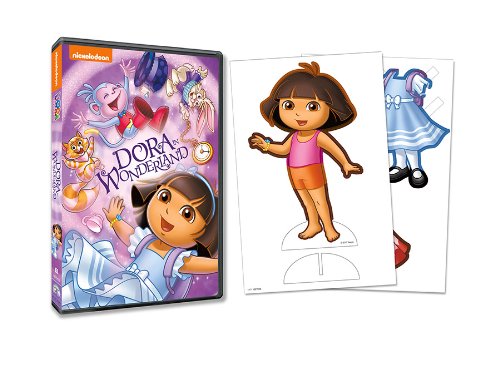 The Dora the Explorer: Dora in Wonderland

DVD is a great surprise for your kids anytime, and would make a great addition to their Easter Baskets! Also be sure to check out the Essentially Spring Collection as well.

There are also a bunch of fun FREE Printable Dora the Explorer Dora in Wonderland Activities!

About Nickelodeon
Nickelodeon, now in its 34th year, is the number-one entertainment brand for kids. It has built a diverse, global business by putting kids first in everything it does. The company includes television programming and production in the United States and around the world, plus consumer products, online, recreation, books, and feature films. Nickelodeon’s U.S. television network is seen in almost 100 million households and has been the number-one-rated basic cable network for 18 consecutive years. For more information or artwork, visit www.nickpress.com. Nickelodeon and all related titles, characters and logos are trademarks of Viacom Inc. (NASDAQ: VIA, VIAB).