You are here: Home / Entertainment / Disney / Behind the scenes of Big Hero 6 Bonus Content with “FEAST” Director Patrick Osborne

I loved being part of so many amazing things on my press trip to LA for Big Hero 6 and McFarland, USA. Meeting “FEAST” Director Patrick Osborn was so cool, and I loved listening to his presentation about how “FEAST” came into existence from start to finish. For those of you that haven’t seen it yet, FEAST is the short that played with Big Hero 6 in theaters and included on the Blu-Ray/DVD. The bonus content is great and my kids love watching it as much as the movie!

We were able to sit down with Patrick as he walked us through the idea, design, layout, animation, and effects of FEAST. He told us that it was inspired by a real life event and the dog was actually supposed to have his “First and Last Meal” but they decided against having the dog have his last meal – so they added a fun twist of kids to the end instead. I think it is perfect and LOVE how the whole short turned out.

To start, he had to present three ideas, but he was really leaning towards this one. He actually found notes in a book from several years ago that had the same ideas – so he had been wanting to bring this to light for a long time. After they got the ideas in place, they started bringing in dogs to see how they acted and record them. They also got pretty interactive – it was funny to watch the videos!

He said that it took 51 weeks from start to finish to create the film. He was by himself for the first couple weeks. There were 5 people for 9 months. The actual shot production was 14 weeks. There were 20 animators for three weeks. 10 lighters for 6 weeks. There were also effect artists, sculptors and more. Overall there were about 60 artists and 7-8 that are instrumental in the creation. 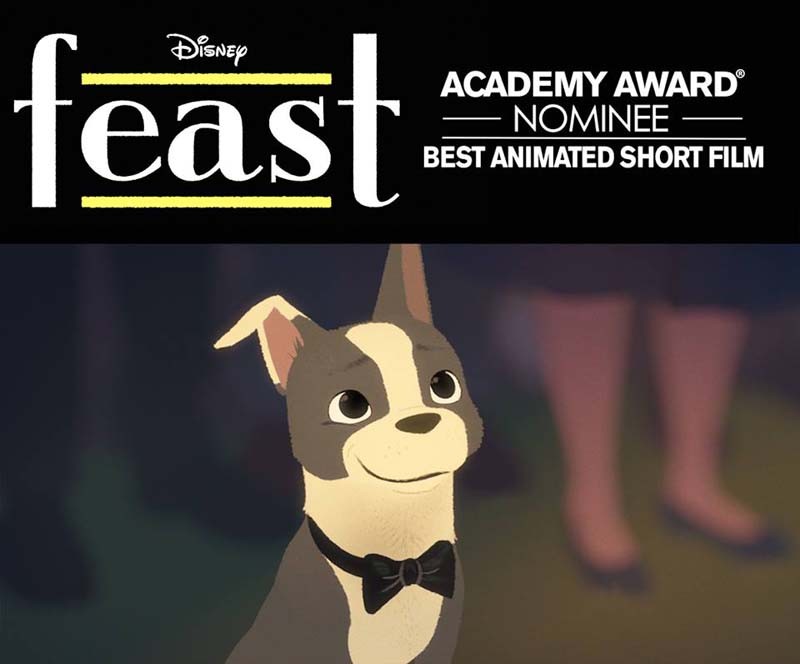 I loved seeing all of the different story boards and animation sequences that they put together over the months that they were making it. I was amazed at how much work goes into making animation. They brought in specialist for the food, animals, emotions, lighting, etc. It was really incredible.

The movie turned out great – it is in fact one of our favorites. If you haven’t seen in yet – you are in for a “treat” 😉 FEAST will win over your heart.

through Amazon to get it the day it comes out. We got a pre-release copy and my kids have watched it at least once a day. It is that good!