Tinkerbell and the Legend of the Neverbeast comes out on DVD and Blu-Ray 3/3. This movie is amazing and has such a great message for all ages. While we were in LA for the McFarland USA event, we were able to cover the in-home release of the Disney Tinkerbell movie and interview some amazing people. Yesterday we shared our Interview with Director Steve Loter & Producer Michael Wigert. Today we get to share with you what we learned about Animating Gruff with Story Artist Ryan Green & Animation Supervisor Mike Greenholt.

Ryan Green was a Story Artists on the Film. He showed us the behind the Scenes of the Design of Gruff [the Neverbeast] and how he was animated. Ryan told us “I work specifically with a lot of Fawn and Neverbeast moments in the Movie. We get a lot of inspiration from Diane Fosse who went out to the wilderness to research the Gorillas.  Fawn knows every single Animal in Pixie Hollow except for this one guy.”

We wanted to know how Gruff came to be and he answered our unspoken question with “It’s interesting that when we started, we didn’t even really know who he was. The first image we had of him he had the horns but not even a tail. We didn’t know what he looks like from the front or the back. So we just had to start asking ourselves what is he and what’s under that fur? As we were starting to draw, some of the Story Artists were drawing the hump on his back like a cat might have, like that arched back. Others are drawing it more like a Bison so we had to say ‘enough with the differentiation. Let’s come up with one solid type of Animal that we’re dealing with here’.

We ended up saying we want to have a solid base for those wings to pop out. So we ended up deciding on a Herbivore type of group and so from that point on, we decided let’s go to the Zoo and let’s research some Animals that have similar body types.  Here at the LA Zoo we looked at like Hippos and Rhinos and it’s interesting, if you look at either of those Animals from the front, they have a big mass upon top and then like a wine glass, their legs are kind of underneath the Center of Gravity and that allows for them to not move around, or not wobble so much when they move around.”

I never really thought about this but I think it’s really interesting how much work really goes into animating the characters. It is like creating an entire creature from the inside out. I love all of the thought and details they put into it – and you can really tell. The movie is amazing and the animation  captures you. I love Gruff – we actually have the stuffed animal and my 5 year old will not give it back! Your kids are going to fall in love.

Ryan went on to tell us more about Gruff. He said “We gave him more of like a Hippo leg or a Cat leg so he could actually do some running and it wouldn’t look silly like he’s just shuffling along. The tail is another important design element. He’s standing on these 4 legs with all this weight and the tail almost became like another appendage for him. We got a lot of inspiration from the Porcupine tail. They can grab onto a log and hang on.”

Ryan continued “The third important part that his tail brought to the table was for motion because we designed this big glass eye for him that Fawn could look into and it was almost emotionless. You didn’t know what was going on back there. She just saw her own reflection and a way to get emotion out of him would be through other body parts and one big one was his tail. If you’ve ever had a cat that gets angry, you know that their tail just starts twitching and has little odd mannerisms like that. We wanted to make him feel somewhat menacing in a way so that when Fawn first met him, he was a little scary.

We started with a bunch of Shark teeth and then we, as the story progressed, we realized that well, he needs to bite off some Snog Grass Sap and chew it up and make a, kind of like a paste to build these Towers so we decided well, let’s keep it bizarre. Let’s leave them other worldly and give them lots of rows of teeth but we’ll put in some Molars in there so he can actually like, uh, grind up the food.”

Next we were able to listen to Mike Greenholt (the Animation Supervisor) talk about various aspects of getting Gruff animated. Mike told us “We had a lot of great design and reference from story and design before we went into Animation. The big challenge for Animation was to make him seem believable. Even though he’s a Fantasy Creature, he had to feel like he was living and breathing in an Animal. Our first challenge was to just make him move like an Animal. So we just did exploration until we got to a walk here that just felt like a very old Creature. It’s very heavy. And then from there, we went to a run and he is very heavy, very big but he can move very fast but we wanted to put just a little bit of that playfulness into this run.”

Mike continued “I can ask her [his dog] a question and she understands and so we knew that that would work with Fawn and Gruff. She could speak to him and he would understand and we can show the thought registering in his brain so that was a huge inspiration for Gruff. He and Fawn can have a dialogue even if it’s non-verbal on his part.”

He told us a lot more about animating Gruff’s face, his tale, etc and it was really fascinating to see how it all worked.

We wanted to know how long it took from when they started until it was finished?

Ryan: The whole process is about 3 and a half years.

Ryan: If there’s a sequence they know isn’t going to change from Storyboards, we’ll start animating it while they work on Storyboards for other sequences. And Animation for the Production is about 9 months but we’ll do some of the walks and the run tests a few months before that so it’s a little over a year that we’re animating the Characters. And it’s usually by the end that you really get a sense of OK, now I understand Gruff. I know how to animate him, when we’re done.

I asked them if they use the Fairies from the previous Movies?

Ryan:  Yeah. What’s nice is that Tinkerbell is Tinkerbell from the previous Movies. It’s almost like hiring an Actress back. Some Characters are new. We have the Scouts which are brand new Characters. Fawn has been tweaked a little bit because she’s a main Character. We just gave her more facial expressions just to get a range of Acting out of her.

Is Gruff one of the hardest things they have had to animate?

Ryan: Yes he was. He was one of the most fun, too because he doesn’t speak. His whole performance is Animation and so the Animator can’t rely on a voice to carry the performance which is a challenge but is also a lot of fun.

Gruff lights up during the movie so we wanted to know if it was fun getting him to light up?

Mike: Yeah, the first time we saw him light up was like Cool cause you know it’s gonna happen and you imagine in your head what it’s gonna look like but when you finally see it for the first time, it exceeds expectations.

Do you draw any inspiration from Voice Actors on their gestures or movements in animating their Character?

Mike:  Absolutely. The voice is recorded before we animate and they always take video reference of them and so we’ll just watch it because when people talk, they have mannerisms, either things they do with their mouth or their face and so it’s great to just see what they do. Also, just the shapes that their mouth makes, it’s a good reference to have that.

For the last question we wanted to know were their favorite parts of the Movie were?

Ryan: I enjoyed the strange sight sequence. It’s where Fawn’s basically bonding with the Neverbeast and trying to figure him out at first and by the end of the song, she’s basically figured out that he’s trying to build these Towers and she’s helping out a little bit and he’s tolerating it so it’s the first little moment that they’e actually bonding.

Mike: I think there’s a lot of them that I like. One that stands out is the Hawk attack at the beginning when we get to see the Scouts do what they’re good at. It’s a great Action sequence to see how they work together and what they do, it was a lot of fun to work on. 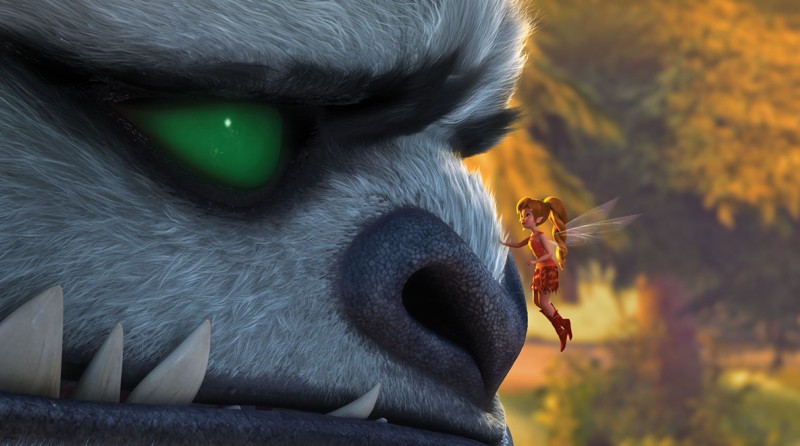 out on DVD and Blu-Ray on March 3!

Are you noseblind to the pet smell in your house?
Next Post: Interview with Scott Adsit – Voice of Baymax – Big Hero 6 #BigHero6Bloggers