A couple of weeks ago we were able to go to a pre-screening of Spirit of the Game (Mormon Yankees) and I was plesently surprised by how good the movie was. I didn’t know a lot about the back history of the film, so it was mostly new to me. I fell in love with the Elders Delyle Condie and Don Hull as they struggled to teach the people of Australia about the LDS faith. When an opportunity arose for them to start a basketball team to help the Austrailian basketball team prepare for the Olympics in 1956, a whole new world was opened up to them. 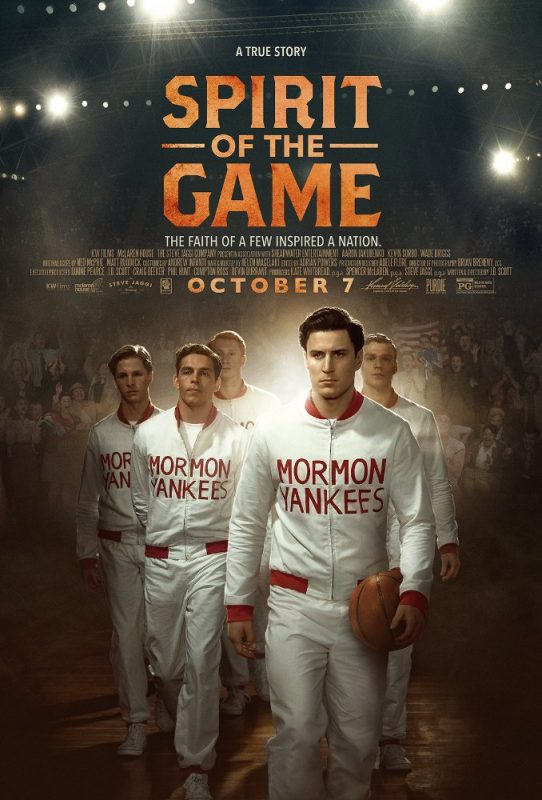 The film stars Kevin Sorbo as Parley Condie (Elder Delyle Condie’s father), Aaron Jakubenko, Wade Briggs and Anna McGahan make up a part of the characters you will fall in love with and cheer for. I took my whole family (ages 5-12) plus my parents and we all walked away talking about how great the movie was, and inspired by the faith of the Elders and their determination to bring the people of Australia the message about The Latter-Day Saints Church.

Here is a trailer for Spirit of the Game (Mormon Yankees)

SIXTY YEARS AGO, in the faraway land of Aus, the incredible true story of the MORMON YANKEES was BORN. And now, this timeless, electrifying story of sport, spirit, trials & faith is yours to experience on the big screen, OCTOBER 7th 2016! The MORMON YANKEES made worldwide history in 1956 when they took on the task of helping the struggling Australian basketball team prepare for the Olympic games. In doing so, this small group of missionary athletes unified an entire nation!

UTAH, mark your calendars for opening night in theaters OCTOBER 7th! SPIRIT OF THE GAME is a must see for the whole family.

RELATED  Why you HAVE to see Thor: Ragnarok

Movies like this inspire us to be our best, do what we can to help others and inspire and uplift those around us. Go opening weekend so we can show our support of the film and they will continue to make more!

Here is a great article with all of the background information about Mormon Yankees so you can understand more about the movie on ldsmag.com.

After the movie, as we were getting ready to leave, we had the privilege to meet Larry Klingler who played on the Mormon Yankees team in Australia about 1 year after this movie’s time frame.

We asked him about his experience playing on the Mormon Yankees. Mr. Klingler told us “We had quite the following. People would come out to watch the games. It was pretty neat. And I really think it was a big missionary tool.”

I asked him if he ever thought he would be playing on the Mormon Yankees when he left to go on his mission. Larry told us “I didn’t know they had basketball teams going when I first went down there. But I was told to bring basketball shoes when I left.”

We asked Larry how long his trip by boat took to get to Australia. He told us 18 days. “We stopped in Hawaii for a couple days, we stopped in New Zealand for a couple days. Then we landed in Sydney, which is not our mission. So someone met us there and took us to a train to go to Melbourne. And that is interesting because in the early days when the states were formed they were jealous of each other. And when they put the railroads in, they changed the gauge of the track at every state line. So you know you go through New South Wales, Sydney to Victoria, then you have to change trains because it was a different gauge. I got transferred to Perth and it was a 3 day transfer.”