Part of our Captain America Event was being able to screen two episodes of The Real O’Neals and  then do Q&As with Noah Galvin (“Kenny”) and Jay R. Ferguson(“Pat”), Matt Shively (“Jimmy”) and Mary Hollis Inboden (“Jodi”), and Executive Producers Casey Johnson, David Windsor & Stacy Traub. They are all great in real life and on screen. Matt sat with us as we screened the two episodes and it was fun listening to him as well as talking to him about the show afterwards. Today we are sharing a little but about our interview with Noah and Jay and the Executive Producers and in a couple of weeks we will share our interview with Matt and Mary as well as more information on the latest episode that will be playing. Be sure to tune in tonight at 8:30/7:30 C on ABC to see The Real O’Neals! 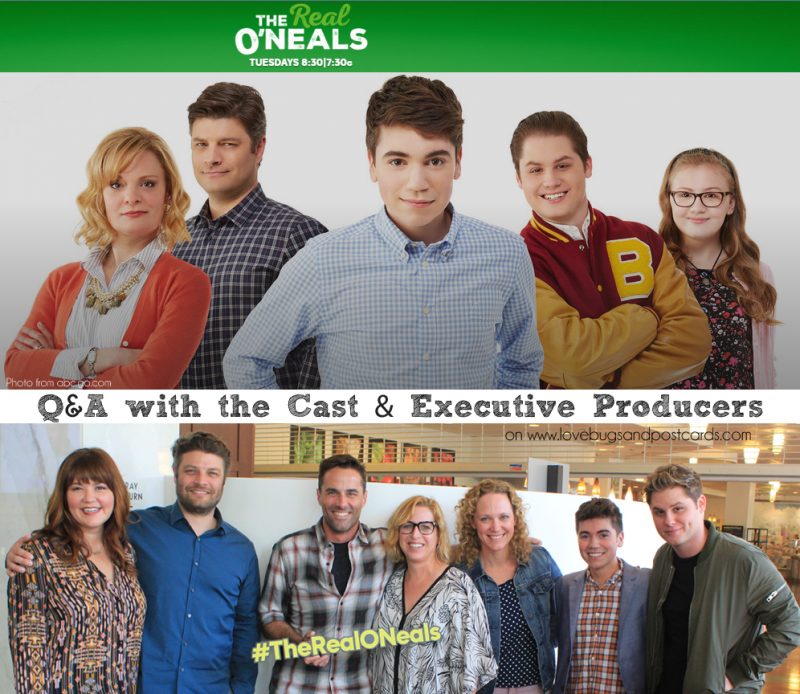 Tonight’s episode 8 “The Real Book Club” is about how:

Eileen faces her book club for the first time after her family’s “outing,” but things take a surprising turn when instead of shunning her the ladies begin opening up – way too much – about their own problems. Kenny’s first trip to the “gayborhood” coffee shop is everything he’d hoped for, until Pat tags along with him to a gay dodge ball match.

It is a funny episode packed with things we can all relate to. As a mom of four kids with a lot of crazy experiences growing up and since I have been married with my own kids, I can tell you there is something everyone can relate to in the show.

Here is a little background on The Real O’Neals, if you haven’t seen it yet:

ABC‘s new comedy The Real O’Neals is a fresh take on a seemingly perfect family whose lives take an unexpected turn when surprising truths are revealed. Instead of ruining their family, the honesty triggers a new, messier chapter where everyone stops pretending to be perfect and actually starts being real. The Real O’Neals stars Martha Plimpton as Eileen, Jay R. Ferguson as Pat, Noah Galvin as Kenny, Mathew Shively as Jimmy, Bebe Wood as Shannon and Mary Hollis Inboden as Jodi.

“There’s always stuff from our lives that we like {putting in the show} – it just feels more authentic, you know? The stuff feels more real.” David Windsor

My group first met with Casey, David and Stacy who are the Executive Producers of The Real O’Neals. They were fun to talk to and get a background on the show. We wanted to know where the idea for the show came from and David told us “Casey and I, were first approached last year from the network and studio who had tried to develop an idea with Dan Savage. So it’s sort of very loosely based on his life being a gay kid growing up in a Catholic family. We liked the idea of a family show for ABC. It’s very specific and then I sort took it and ran after that.” Casey adds “David and I have been writing have been writing together for about fifteen years, and then we wrote the pilot for this, and when we went into production on the pilot, we brought Stacy Traub on board to help us. Once it got to series, the three of us run it together which is great, especially for people with eight children between us.”

David is talking about the cast and tells us “But they’re all so amazing. They instantly bonded; they hang out with each other outside of work. They’re a family and that just makes our job so much easier because you can only write so much of that, and then rest of it has to sort of happen organically and luckily with them, they love each other so much.” You can really see this when you are around them off screen. They have a friendship that is beyond the show.

Stacy adds “From the pilot, they had that chemistry. And Jay was on Mad Men, and he said they used to always play games during the downtime, so during the pilot, he brought Catch Phrase and all these games, and he was the one who kind of was like, we’re doing this, because some actors can just go off to their trailer; they wanna do their own thing, and he really made them this family. And now they hang out- they still hang out. It’s very amazing.”

After visiting with Noah and Jay, we quickly discovered that the cast of the show is very close. Noah said “We all really know how to do the work and leave the work at work, and be able to have relationships with each other that don’t bleed into the relationships on the show”. Jay added “If anything, they enrich the relationships on the show. Because of how tight we all are, and the bonds that we form very early on, we stay with each other in between takes. We don’t go back to our rooms, really. We kinda have a common area where we like to hang out and play games and talk”.

Since they have finished filming season 1, we wanted to know if they have a favorite scene. Noah tells us about “The cake- I was excited to eat that cake. Like, all week, I was so stoked, and then of course, me and Martha didn’t film the take which was us on the porch eating the cake until, like, 3:00 am on Friday. And it was after three meals, they brought in pizza for the first time ever, and I was like, yes. I went a little too hard on the pizza. Then at 3:00 am, they’re like, now eat three slices of rainbow cake.”

Jay told us that he probably had a favorite scene if he thought about it, but he definitely has favorite lines. “Mine’s more about the moments that made me laugh while we were working, and those are always the ones that I look back on with the most fondness, and the ones that inevitably crack me up the most once I see it on TV.” He went on to tell us about the camping episode and when he pulls out the Luna Bar. He also tell us about  “But if I look over and any of the other guys- if their lips are quivering at all, it’s just a snowball, and then we both lose it. The end of woods moment Matt and I were basically like who’s gonna be the one? I’m not- it’s not gonna be me. It’s not gonna be me. And then he’d go, and then I’d go, or then, you know, vice versa. So there’s just a lot moments like that are my favorite moments.” 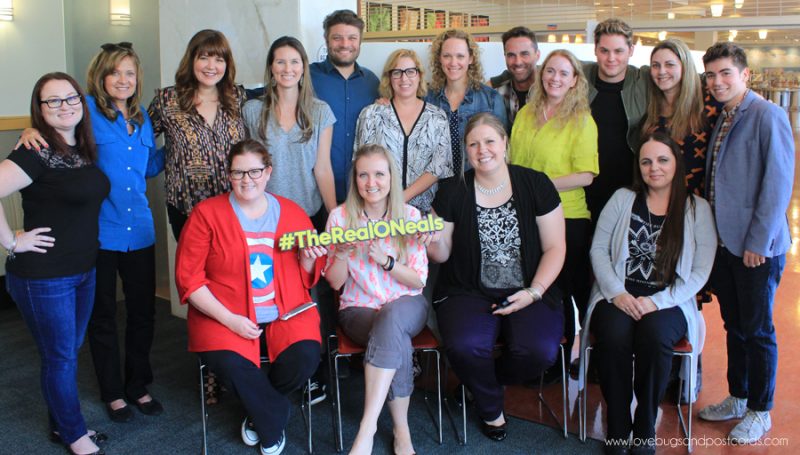 Be sure to watch The Real O’Neals on ABC tonight at 8:30/7:30 C. We will be on Twitter during the show (@CoralieSeright) so follow #TheRealONeals as well as the cast and producers