The mystery, adventure and fun continue with the launch of Cyberchase‘s new mobile-friendly game, Watts of Trouble, in which players use their math skills to power up the amusement park rides and fix any obstacles Hacker creates.Watts of Trouble is now available on the Cyberchase website and the free PBS KIDS Games app.

Cyberchase Season 11 Episodes (check local listings):
“Creech’s Creature Quandary” Premieres December 26, 2017
Topics: Habitat fragmentation, maps, spatial sense
Creech invites the CyberSquad to Tikiville to show off the amazing new bike path that has everyone riding bikes rather than driving cars. Everyone is having fun – even Hacker is joyriding on his bike! When Inez realizes the busy bike path has divided the habitats of many of Tikiville’s creatures, splitting up families and preventing animals from reaching food and water, she tells Creech the path should be shut down. But Creech doesn’t want to take away the benefits the path has created for her community. The disagreement drives a wedge between the two good friends. Can Matt, Jackie and Digit help them find a compromise? And what is that sneaky Hacker up to?!
“A Murky Mystery in Mermaidos” Premieres December 27, 2017
Topics: Thermal water pollution, temperature measurement, data collection & representation
Digit is going on his annual visit to Mermaidos, an underwater paradise, to visit Eugene, one of his best friends in the whole cyber-world. But when Digit arrives, something is wrong. Mermaidos is murky and warm and the fish are leaving in droves. Feeling terrible for his pal Eugene, Digit calls in the CyberSquad to help. What could be heating the water and making it uninhabitable for the Mermaidians? And can they stop whatever – or whoever – it is before all the Mermaidians need to leave their home?
“Plantasaurus!” Premieres December 28, 2017
Topics: indoor air pollution, skip counting, simple ratios
It’s a special night in Cyberspace for Matt, Inez and Jackie. Motherboard has invited them to a slumber party in the newly renovated Control Central! But a case of sneezes, itchy eyes and scratchy throats threatens to put a damper on the slumber fun. And to make matters worse, Hacker has his own surprises in store for Motherboard that night. Inspired by a monster movie, he makes his very own plant monster to take over Cyberspace once and for all! Can the kids get to the bottom of the problems inside Control Central before the problems outside come to Motherboard’s front door?
“A Reboot Eve to Remember” Premieres December 29, 2017
Topics: wind power, modeling, data collection, guess and check strategy
It’s almost Reboot Day – when all of Cyberspace celebrates a fresh start for the new year! It’s Delete’s favorite holiday, but Hacker is in a bad mood because he’s low on energy. Fortunately for Hacker, the blustery town of Bottawa has a powerful energy source he can steal. Unfortunately for Bottawa, this energy source raises the big ball at midnight on Reboot Eve, and the celebration is being broadcast live across Cyberspace! When Hacker goes through with his plan, Delete stays in Bottawa to join forces with the CyberSquad and save the holiday. Can they find a way to use Bottawa’s wind to raise the big ball by midnight? And will Hacker’s Reboot resolution 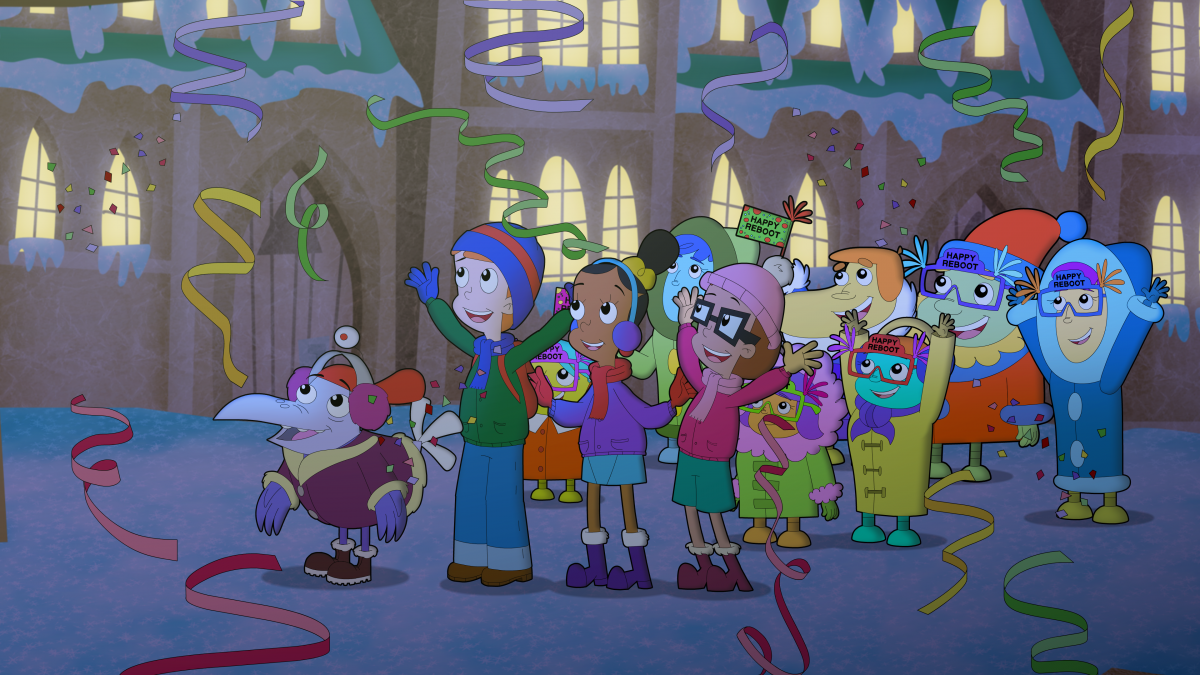 “Housewarming Party” Premieres April 16, 2018
Topics: green roofs, temperature measurement, estimation
In Happily Ever Afterville, the Three Pigs have just finished building their new cottage at the base of Mount Evermore – a peaceful spot without any direct sunlight. They are celebrating with a housewarming party, and they’ve hired Jackie as their party planner! But trouble strikes when Hacker and Wicked, who are having a battle of wits above Mount Evermore, accidentally zap the mountain away. Now, the sun is streaming directly onto the pigs’ house, and it is quickly heating it up inside! Meanwhile, Hacker starts feeling something very strange – guilt. Can the CyberSquad cool down the pigs’ warming house and save their housewarming party? And will Hacker – for the first time ever – do the right thing?
“Invasion of the Funky Flower” Premieres April 17, 2018
Topics: invasive species, linear measurement with non-standard units
Contestants from all over Cyberspace have come to Gardenia, a gorgeous garden cybersite ruled by the Queen Mum, for its annual flower-growing contest. Hacker is sure his doofydill will win Tallest Flower, but when he loses to Inez and her happiolus, he is furious and plots a plant-based revenge. He flies off to a faraway site and brings back a funky flower – an invasive species! The funky flower emits a stinky odor that no one can handle – not even the Queen Mum. Worse, it also spreads quickly, steals water, hoards sunlight and crowds out all the native plants! The CyberSquad races against time to find ways to stop the funky flower. Can they rescue Gardenia before it – and Hacker – take over for good?
“A Renewable Hope” Premieres April 18, 2018
Topics: renewable and nonrenewable natural resources, timelines
Hacker has finally captured those Earth brats on the Wreaker! Before he can decide what to do next, an alarm goes off…the Wreaker is out of fuel! He lands on the nearest cybersite, Ekardia, an eerie place with no one in sight and no way to contact anyone. He has only one choice: enlist the CyberSquad’s help so they can ALL get back home. They find one Ekardian left behind – Ted. Everyone else left because Ekardia ran out of frixite, the nonrenewable resource they used to power everything. Now Ted lives off the natural resources around him. If Hacker and the kids are going to get home, they and their resourceful new friend will need to learn from Ekardia’s past. Can they also help save its future?
“The Migration Situation” Premieres April 19, 2018
Topics: citizen science, data representation & interpretation
Bird lovers across Cyberspace have arrived at the Migration Celebration – a magical event where the rare teal-footed trillers flock once every five years. But when the trillers are a no-show, Professor Bobson, host of the celebration, knows something is amiss. After he cancels the event, phone calls and social media posts start reporting triller sightings all over Cyberspace! The Professor and kids recruit dozens of citizen scientists to record their observations when they see a triller. But in the chaos, they forget Digit, the biggest triller lover of all, can be a big help. When all the citizen scientists have reported back, it leads to a shocking discovery. What is the data telling them? And can Digit help crack the case?
“Back to Canalia’s Future” Premieres April 20, 2018
Topics: water conservation, capacity, estimation
Digit’s friend Pearl says her town is in trouble. The water levels in Canalia, a beautiful cybersite connected by canals, keep getting lower, but Canalians don’t see the problem. So Pearl built a time machine to prove she’s right! She travels with the CyberSquad into the past to see how much higher the water levels were, and the kids promise to help convince Canalians to change their water-wasting ways. But when they invite everyone to travel through time and see what happens, the time machine goes missing! Hacker has stolen it! Can the kids get the time machine back before Hacker resets the course of cyberhistory?! And can Canalians be convinced to protect their future by changing the present?
Cyberchase is produced by THIRTEEN Productions LLC for WNET. Sandra Sheppard, THIRTEEN’s Director of Children’s & Educational Media, is executive producer. Kristin DiQuollo is series producer.
Funding for Cyberchase is provided by The JPB Foundation, the Heising-Simons Foundation and Ernst & Young LLP. Additional funding is provided by the Tiger Baron Foundation and Shailaja and Umesh Nagarkatte. Funding for the episodes “A Reboot Eve to Remember” and “A Renewable Hope” is provided in part by Peril and Promise, a WNET initiative made possible by P. Roy and Diana T. Vagelos, Marc Haas Foundation and Sue and Edgar Wachenheim III.