We are all excited for the new Disney coming out in a couple months – Disney’s Zootopia looks so funny and I know that my kids are going to love every minute of the movie. International superstar Shakira is lending her Grammy®-winning voice to Gazelle, the biggest pop star in Zootopia.  The all-new original song, “Try Everything,” was written by singer-songwriter Sia and songwriting duo Stargate. Director Byron Howard said, “For the role of Gazelle, Zootopia’s most beloved superstar, there was only one person on our wish list: Shakira. Luckily for us, she said yes. Her immense talent and charm bring Gazelle and her song, ‘Try Everything,’ to life.” Watch the New music video for Shakira’s “Try Everything” from Disney’s Zootopia below. 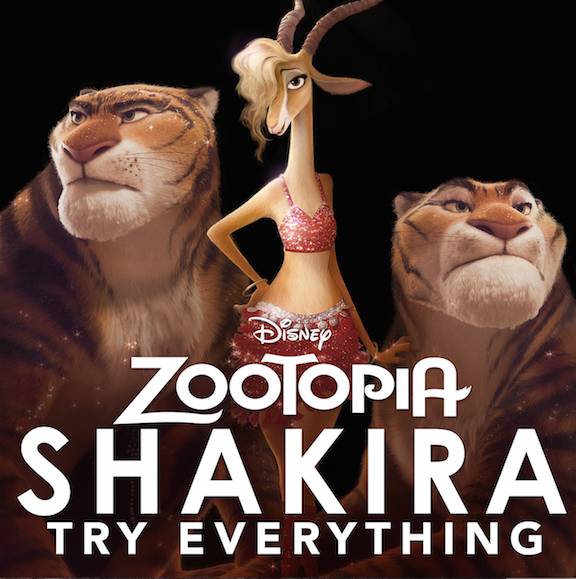 “Try Everything” single is available now at digital retail. https://itunes.apple.com/us/album/try-everything-from-zootopia/id1066009981?app=itunes

Walt Disney Records soundtrack to ZOOTOPIA will be available March 4th, the same day the film opens in theatres nationwide!

The modern mammal metropolis of Zootopia is a city like no other. Comprised of habitat neighborhoods like ritzy Sahara Square and frigid Tundratown, it’s a melting pot where animals from every environment live together—a place where no matter what you are, from the biggest elephant to the smallest shrew, you can be anything. But when rookie Officer Judy Hopps (voice of Ginnifer Goodwin) arrives, she discovers that being the first bunny on a police force of big, tough animals isn’t so easy. Determined to prove herself, she jumps at the opportunity to crack a case, even if it means partnering with a fast-talking, scam-artist fox, Nick Wilde (voice of Jason Bateman), to solve the mystery. Walt Disney Animation Studios’ “Zootopia,” a comedy-adventure directed by Byron Howard (“Tangled,” “Bolt”) and Rich Moore (“Wreck-It Ralph,” “The Simpsons”) and co-directed by Jared Bush (“Penn Zero: Part-Time Hero”), opens in theaters on March 4, 2016.

Officer Judy Hopps (voice of Ginnifer Goodwin), the very first bunny on Zootopia’s police force, jumps at the opportunity to crack her first case—even if it means partnering with fast-talking, scam-artist fox Nick Wilde (voice of Jason Bateman) to solve the mystery.