You are here: Home / Entertainment / Interviews / Interview with Penelope Wilton and Rebecca Hall for Disney’s The BFG #TheBFGEvent

Today we get to share our last set of interviews from my trip. I was able to go to Los Angeles as part of Disney’s #TheBFGEvent and walk the red carpet at the world premiere as well as interview talent from the movie including the up and coming Ruby Barnhill (Sophie) and the spectacular Director Steven Spielberg. We also interviewed Mark Rylance (The BFG) and Jermaine Clement (FleshLumpEater). Today we are sharing our interview with Penelope Wilton and Rebecca  Hall. They were so charming and made us laugh the whole time! 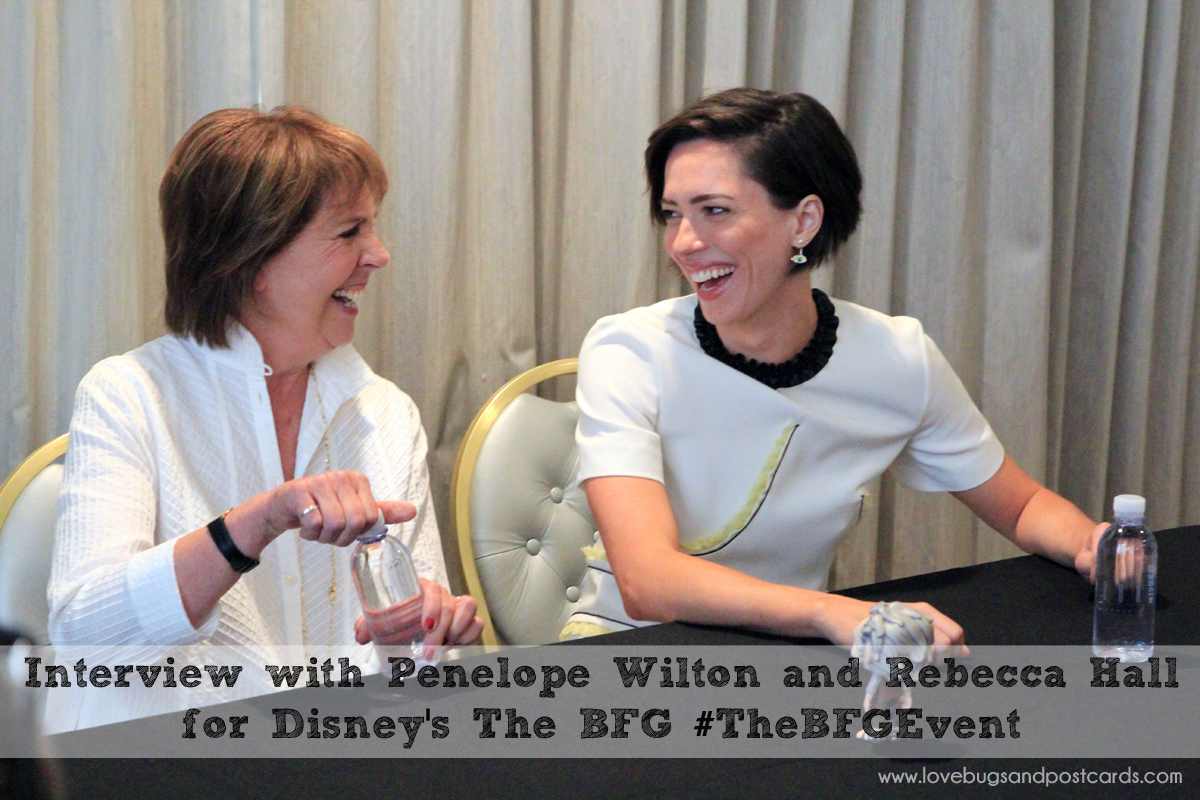 We asked them share how they both got involved in the project. Penelope told us “I got a phone call and my agent got a phone call and said Steven Spielberg wants you to do this film, “The BFG,” and I said yes.” she told us laughing “If Steven Spielberg wants you to do a movie, you do it.” and in her brilliant British accent she says “Wouldn’t you say?” and then Rebecca Hall chimes in with “Yes, I would. I had exactly the same thing. I got a call saying it’s a very big part but he has asked specifically for you to do it, so I’m like well, I’ll do it, of course I will. Also, BFG is a book that as a child I loved, so even before I’d read the script or knew what the part was, I was like yes, certainly I want to be a part of that, of course, you know?” and then Penelope looks at all of us and says “So that was quite a simple answer” laughing. 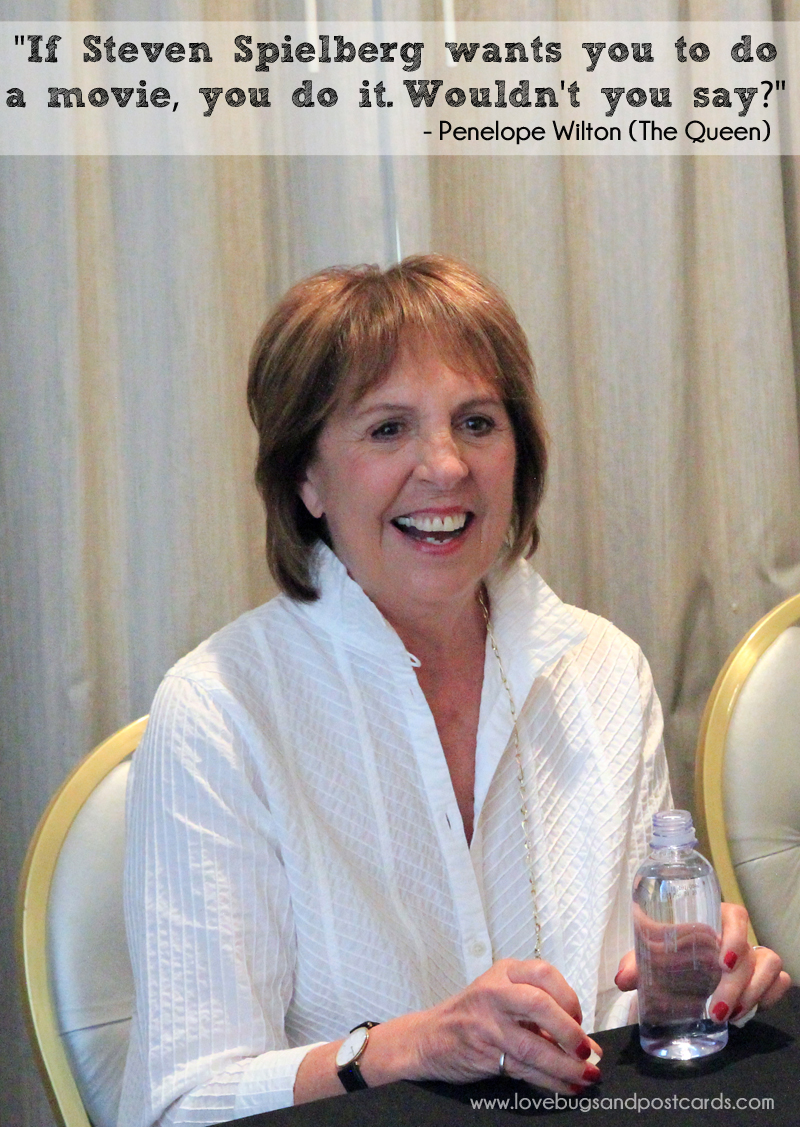 Penelope is on “Downton Abbey” so we wanted to know if she was filming when she got the call. She told us “Well, I hadn’t started the last series, so they were very accommodating and they said, because I was going to be in the middle of the shoot, so because Julian hadn’t written it all, he sort of worked around me a bit, for just over a month and then that was fine.” We commented that it must have been interesting going from one character to the other. She replied “Yes, it was, when I was playing the Queen and then, you know, it was all very upper class.” We all laughed and then asked her if she let everybody know on “Downton Abbey” that she was the ‘queen’. She told us “No, I didn’t. They weren’t too interested. In fact, they were rather envious. There was silence around the thing when I came back. She’s just been making a film.” We then asked her about being a dame and what that is like. Penelope said “Well, it’s rather surreal actually, to be quite honest with you, being a dame. When they asked me to do it about seven weeks ago, and they write to you and they sent it to the wrong address. So, then another one went out to my agent and then it said priority because obviously they hadn’t heard. They asked if the Prime Minister puts your name forward to the Queen, would you accept it? So, I said I would. And then they said you must not tell anybody until it’s released which was six weeks after. And then there was a total silence and of course then I thought I dreamt that. That didn’t happen. I made that up. I just had a dream. Then it wasn’t until a week last Sunday, that it came, Saturday it came out on papers and it did actually say my name so I hadn’t told anyone but my daughter. I told my daughter and my sisters. They would have been a bit disappointed as indeed I would have been.” She had us laughing the who time. She is very funny. 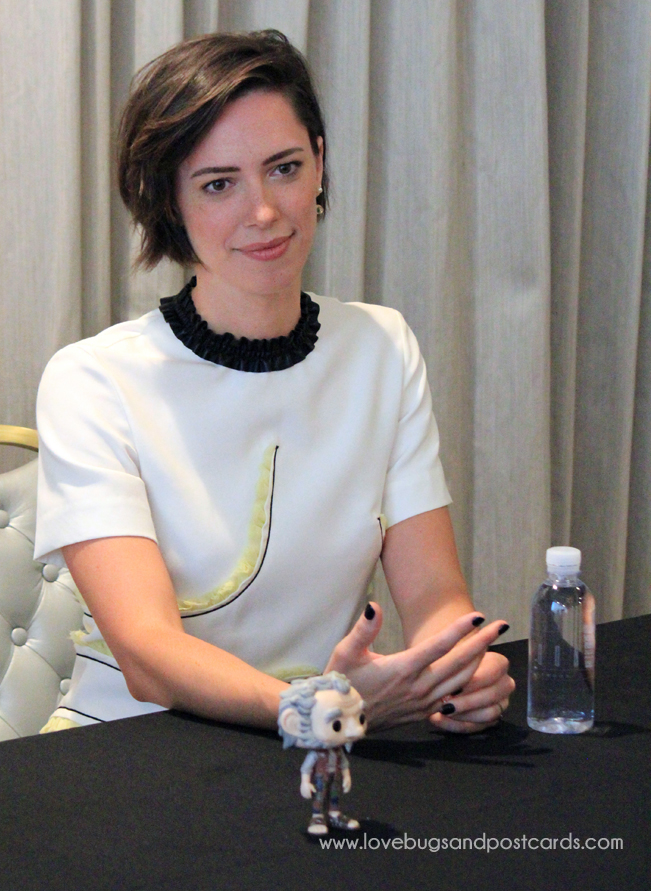 Ruby Barnhill (Sophie) is such a darling. We wanted to know about their experience working with her. Penelope said “Oh she’s a darling. We both loved working with her and Rebecca will tell you, she’s got the most wonderful sense of humor and she’s a lovely girl. She also takes direction very well, doesn’t she? And she concentrates and when you’re young repetition is really boring. I mean, you do it twice and then why would you ever want to do it again? And she sort of managed it, didn’t she?” Rebecca added “She was a consummate professional. I also remember it was all of that sort of stuff, the acting, the repetition and what, she was brilliant, but she was also brilliant at just being a person on the set. I remember her knowing everyone’s name, the crew and like coming in in the morning and being like all right how are you doing, Jim, all right? You know, that sort of thing, I remember her being astonishing and she just really, really made me laugh all the time. We did all sorts things. She made me work out like dance routines. She gave me a nickname because of my purple dress. I was Purple Swan for some reason. And she called Rafe something else. I can’t remember what it was.” Penelope jumps in and answers “Queen” and then Rebecca says “Queen, Queenie.” 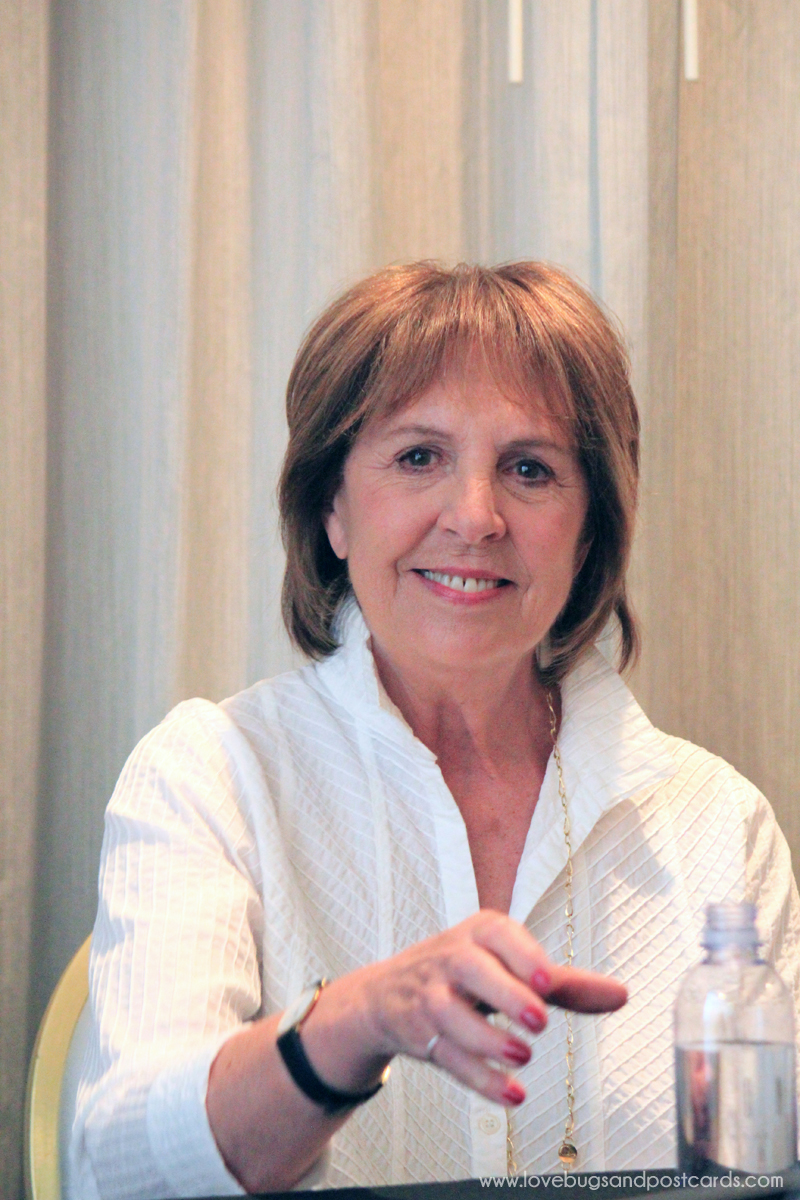 Penelope went on to say “But she [Ruby Barnhill] was wonderful because Steven worked tremendously well with her. Once the scenes were setup he worked very fast, didn’t he? So the boredom level is minimized. Otherwise you have to be spontaneous, especially if you’re young you haven’t learned about repetition and that is a difficult thing. I find it pretty hard.” Rebecca told us “Because acting is quite close to sort of games you play in the playground but you don’t have to do it again and again and again. I mean, you have everybody believe once in the playground that you’re the Queen and I’m the thing, you know, then it’s great. And it’s on to something else.” We were all laughing by the time they finished this. So funny back and forth. 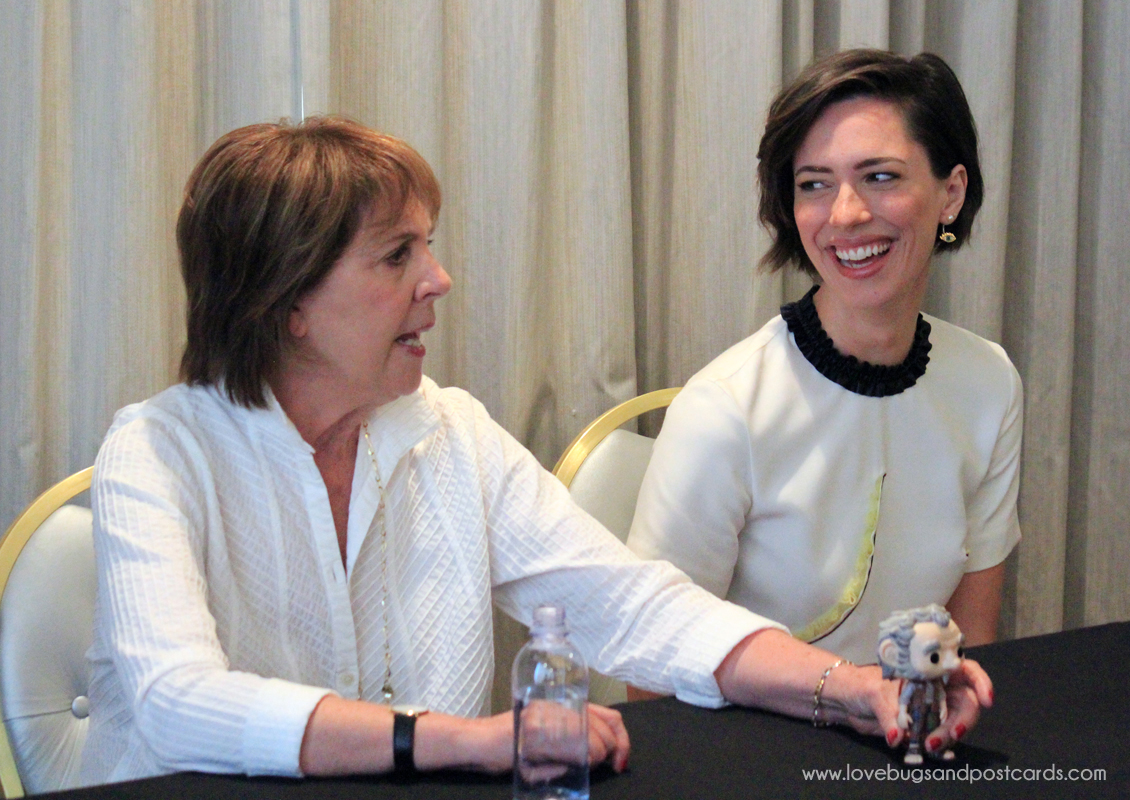 We wanted to know about their favorite scenes from the movie. Penelope told us “I like the dreams, because it’s written in the book that they catch the dreams but Steven made the dreams so beautiful and then the angry dreams, the red dreams, when they get caught in the bottle, when they go under the water then, I loved that. I thought that was a lovely sequence but there were so many. I mean, I loved the giant.” Rebecca adds “Yeah, I did too. Actually, I’ve got to say, it’s when, when you have a problem with wind, is probably my favorite.” laughing and we all joined her. It was such a funny scene in the movie! “It’s brilliant. It’s so funny.” Rebecca adds about the scene. Penelope chimes in with “And we had fun playing that scene because Rafe had to do his proper moment before we did ours, so we all gazed at him while he did his. The effect of how it would come in silence, then all right, Rafe, the camera is on you and then he, right, go, and he had to do whizpopping, but you know, it’s a private moment that you don’t often see.” Once you see the scene in the movie you will understand this more, but it was so funny and hearing about this makes it even more funny!

We asked them what something was that they wanted to get from the movie. Penelope told us “On the very basic level I want people to enjoy being taken to that world because it’s a wonderful story written by a great storyteller [Roald Dahl] meeting another great storyteller and a visual storyteller [Steven Spielberg], so if you get those two together, it’s a wonderful combination, but also it, like all these stories, it is people learning to understand themselves and learn that you have to just believe in yourself. And little Sophie, who doesn’t have much, but when she meets somebody who has even less than she does and he’s 20 foot tall, they sort of work as a good team and they both of them understand that they are outside the norm and they give each other confidence and when you have confidence in yourself you can take on the world. And I think that’s perhaps the overall message of the movie. 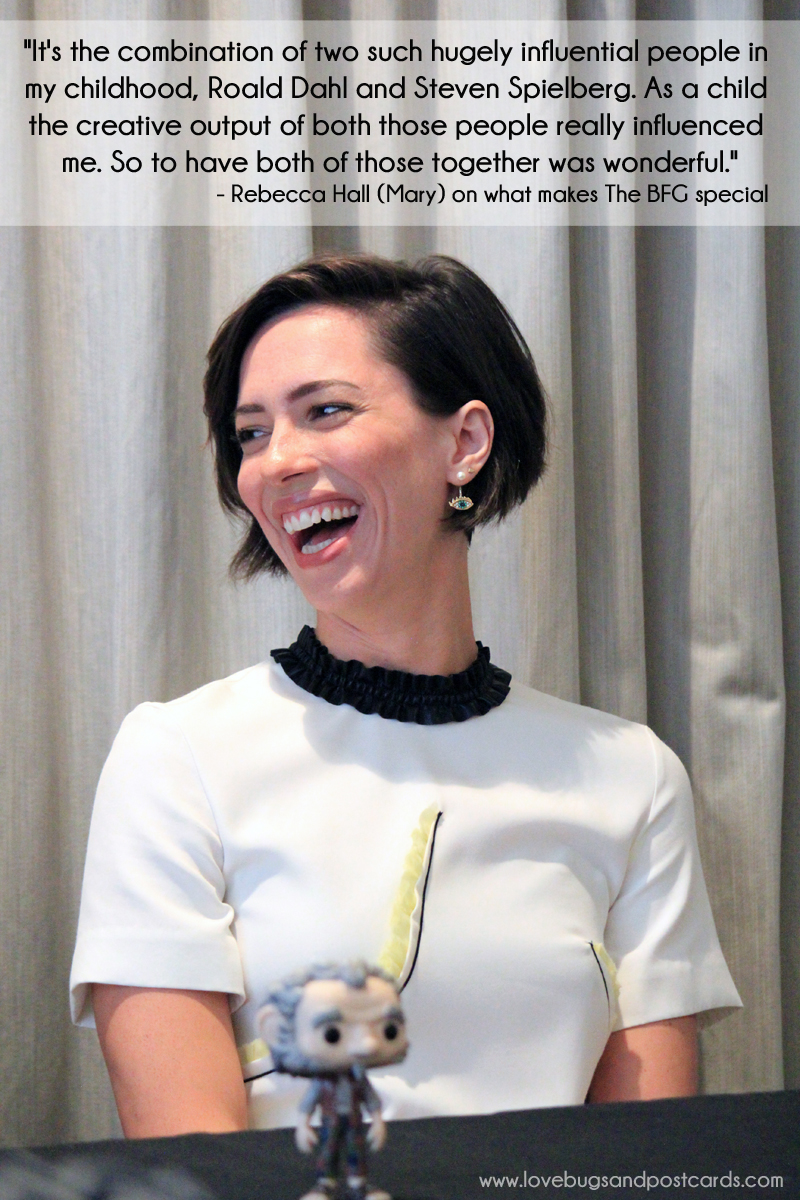 We asked them what makes The BFG film special for each of them. Penelope said “I’m lucky. Steven Spielberg has done great things in my life, in my career actually and so that was special. Also, this is a wonderful story, wonderful to be part of something that, well I hope, a whole generation of young children will remember like they did “E.T.” because it will be a stand up moment in the film. For all those reason and also I met and worked with Rebecca here so that was lovely, too.” Rebecca smiled and said “I think we probably met when I was a child.” and Penelope said “Yes because I worked with Rebecca’s father, Sir Peter Hall, when he ran the National Theater so I remember when she was born.” Rebecca finished off the interview with “I remember a figure who I’ve always admired and loved from a far so it was a real treat to get to work properly with you. But yes, I think, I very much second what you said, for me personally it’s the combination of two such hugely influential people in my childhood, Roald Dahl and Steven Spielberg, as a child the creative output of both those people really influenced me and I loved and so to have both of those together was wonderful.” 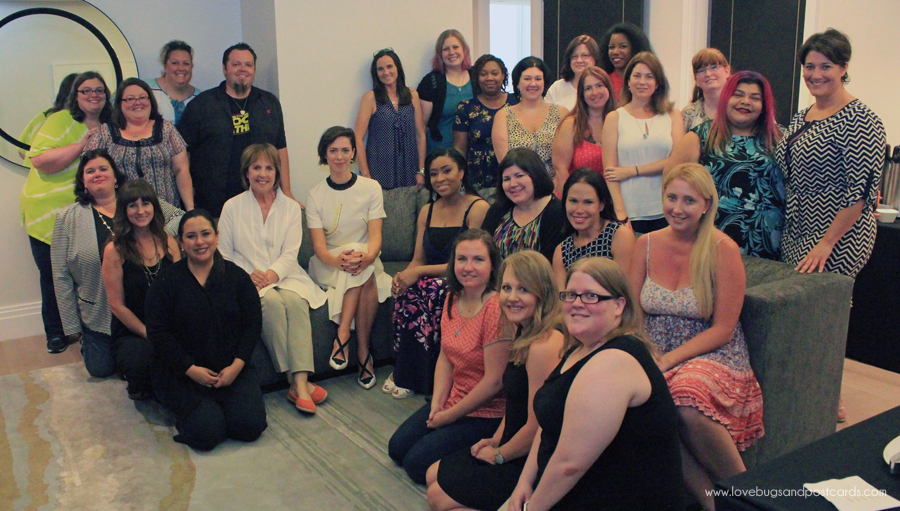 What a great interview. He is so amazing and nice and I love that he took the time to talk to us about the film and share life stories with us. Disney’s The BFG movie comes out Friday July 1, 2016! Here is the trailer if you haven’t seen it yet: 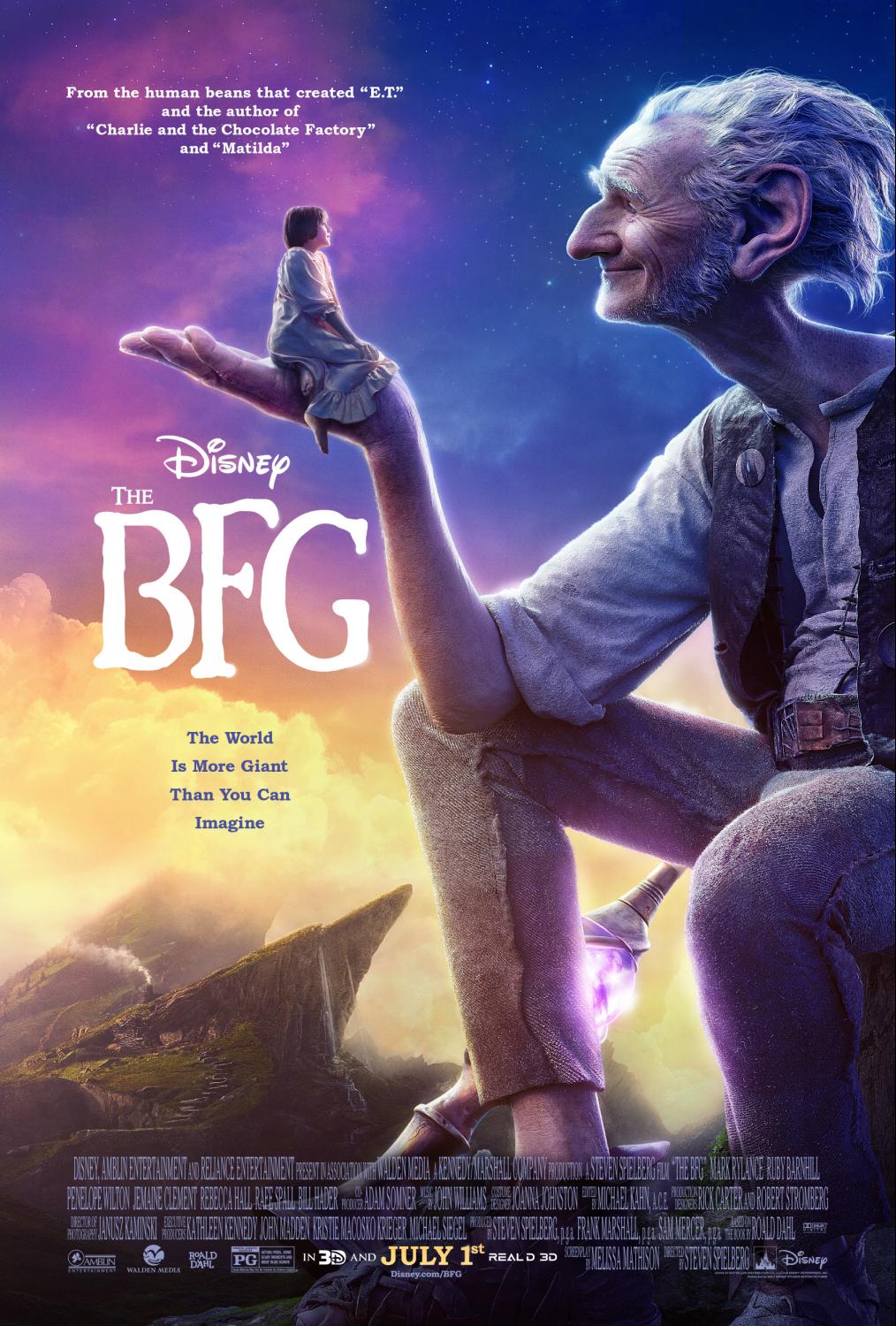 Today we shared our interview with Steven Spielberg and Ruby Barnhill. This week we will be sharing more interviews with the cast of the movie as well as other fun things we were able to do on the trip.

This trip is sponsored by Disney. This does not affect my opinions and they are 100% my own.

Disney XD’s Future-Worm! and interview with Ryan Quincy
Next Post: My must-have beauty item for nights-out