When we were in LA for the Captain America Event we were able to meet with Zach Gilford, Alison Pill, Floriana Lima, Executive Producers Jenna Bans and Laurie Zaks and watch The Family episode 107 with them live. We had a great family style dinner, and watched the show and during commercials it was fun to talk with them about what was going on. After that episode was over, we were able to watch THE FAMILY episode 108 “Sweet Jane” with them as well. This about knocked me out! I can’t believe all of the twists and turns this show is taking. You will be able to watch the episode tonight at 9/8 C, on ABC and you won’t want to miss it! If you haven’t started watching the show yet you can watch it on On Demand with Xfinity, or on the ABC website. 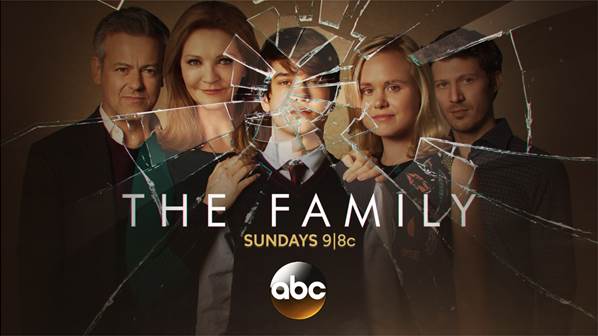 In S1 E08 Sweet Jane – Claire wrestles with the emotional ramifications of Willa’s scheming. Meanwhile, Nina observes that Adam disappears every night from his home and sets out to track down his mysterious destination, while Clements investigates Jane’s connection to Doug, the pock-marked man. When the Governor’s wife threatens to reveal Claire’s drinking, Willa handles the situation by exposing another Warren family secret, potentially changing the outcome of the election. Finally, Hank makes a shocking discovery that reveals his true involvement in Adam’s kidnapping.

ABC’s new thriller The Family follows the return of a politician’s young son who was presumed dead after disappearing over a decade earlier. As the mysterious young man is welcomed back into his family, suspicions emerge—is he really who he says he is?

We sat down for a Q&A with with Zach Gilford (“Danny”), Alison Pill (“Willa”), Floriana Lima (“Bridey”) and Executive Producers Jenna Bans & Laurie Zaks. It was a fun interview filled with laughter, stories and fun. We wanted to know how the idea of the plot and storyline came about and Jenna shared with us that she “lived in a house, and across the street was a sex offender, and I freaked out and got really scared. So part of it sort of came from there. The other part was ABC had been wanting to do this idea and make it into a mystery thriller. So I sort of married the two ideas.”

Because The Family is really emotional and Allison Pill who plays Willa does an amazing job in character, we wanted to know how she gets into character. She told us “First of all, we have really good writers, and it really makes sense to me. And then I think the sort of touchstone for me is the moment when me and Madeline Arthur switch places on the bed in the motel. And she’s fully frozen at thirteen. Like, she is somebody who will do anything to keep her family together. Everything else that is built up- all of this armor is only to get to her ultimate goal, which is having her entire family under one roof again. That’s it. And every- literally, everything else is driven by that, so when anything threatens that, that is like, the worst thing that can happen in the world. So all of the emotion just comes from that thought of being thirteen and trying to keep your family together.  I was a very emotional thirteen year old as most are.” This was met with laughter, because all 25 of us doing the Q&A are women and we all completely understand emotional 13 year old’s. May of us also have teenage or close to teenage daughters.

Laurie Zaks also added “But Allison also knew from the beginning because we talked about it on the pilot even though we hadn’t figured out exactly what she had done, totally. By the time we filmed the pilot, you knew- she knew that he wasn’t her brother, so all of those cool moments in the pilot where she’s watching him in the hospital room, all of that footage that we used in seven, a lot of it we found in the pilot, and you were just doing that.” Alison does an incredible job playing Willa in the show. There is so much more to her than you see initially, and it takes time to get to know her and understand her on a deeper level. Willa is a crucial part of the show and Alison portrays her character perfectly!

I wanted to know what is it like working with different directors for different episodes. I just recently found out that they have different directors and I could only imagine how hard that would be. I wanted to hear what they thought. Alison said “It’s, it’s weird. It’s super weird” and Floriana added “It’s definitely weird to get used to somebody {different}”. Alison went on to say “It’s the hardest thing about TV. It really is because it’s not the director’s medium. And then suddenly the next day, there’s somebody new who doesn’t know your set, doesn’t know your crew, doesn’t know your camera guy’s name…” She talks about how it is a little easier with a great cast to work with and how they react and work with each other, but that it makes it hard when there are different directors and you are not sure what to expect all the time. Jenna also added that they have found a few that they really like and they have done multiple episodes which makes it easier and they do a better job because they understand the show and the set.

Alison also added “It’s really weird going back and forth to different people. Andrew- a familiar face, because he came and did three, and then five and six, and having him for all of those ones was so {nice} because you’re just like, oh, at least you’re not a stranger. Because often the sort of annoying part is, by the time you’re done eight days of shooting, you finally know this person and their vibe, and then they’re gone”

They started talking about Joan Allen who plays “Claire Warren” on the show and they told us about how great of an actress she is (of course we all agree 100%) and that she loves to bake! Alison said “You guys, Joan Allen is so good at acting” and Floriana added “She is. She’s really nice, too”. Alison told us that Joan made around 150 cookies from her grandmother’s recipe on her day off and took them in before their holiday break for the cast and crew of the show. All of them agreed that they were amazing cookies! They also told us that she did a baked potato bar for everyone.

Floriana added that Joan “shucked them”. Of course she meant peeled and we couldn’t stop laughing. Zach added “She shucked potatoes. Nobody shucks potatoes”. And then Floriana countered ” Nobody shucks potatoes like Joan Allen”. Of course everyone was laughing so hard. Jenna added “She’s very nice is the point” and Alison finished with “She’s great. She’s just nice” referencing Joan and everything she does on and off set.

Because the show is emotional and a little darker, we wanted to know if it is hard to go back to normal after being in such a dark place? Alison told us “Not for this one. It’s funny because I say i’m not affected by it, and most of the time, I’m not. We did have this really good set full of great people. But in the scene that’s just at the end of that episode when she’s like how are you this person (referring to where Joan asked Willa about how she was the person she was), I don’t know, I couldn’t stop crying. I lost my mind on it. It’s partly just the fear of like my mother has never said anything like this to me. But sort of getting into the character and picturing my mom saying that to me, and I was panicking and then needing a really big hug from Joan at the end.”

Getting into character requires that that you pull from personal experiences and that helps you create the emotions you need to display. It can sometimes be hard to let it go in your head. Alison told us that she would take her dog on set and that would help calm her down. And she also enjoyed going home and cooking dinner and watching TV (like Veronica Mars) and relaxing. She would “carve out of time for sanity and sort of coming back to Earth and life”

We wanted to know how many seasons could they see this show running? Jenna answered “Definitely three. I was on Scandal and were like, this can only go one season. What are we gonna do? And then you get to the end of the first season, and you’re like, oh, that’s a second season, and then in second season, you’re like, that’s obviously the third season. So somehow it always works itself out” 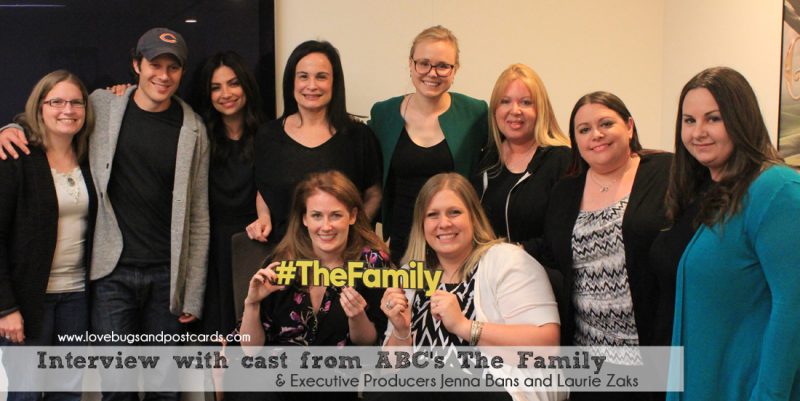 The interview was a lot of fun and there was so much that was talked about! I can’t wait to see THE FAMILY episode 108 “Sweet Jane” tonight on ABC. Remember it starts at 9/8C. We will be live tweeting during the show so be sure to follow us on Twitter at @CoralieSeright, #TheFamily and #ABCTVEvent. You can also connect with Floriana Lima (“Bridey” – @florianalima) and Executive Producers Jenna Bans (@jennabans) & Laurie Zaks (@lzakshorn) on twitter.

Disney’s The Jungle Book Review **no spoilers** #JungleBook
Next Post: Norm of the North on DVD & Blu-Ray today! + Giveaway