You are here: Home / A Lovebugs Life / About Me / Giving Disney’s PLANES Its Wings and National Aviation Month #disneyplanesbloggers 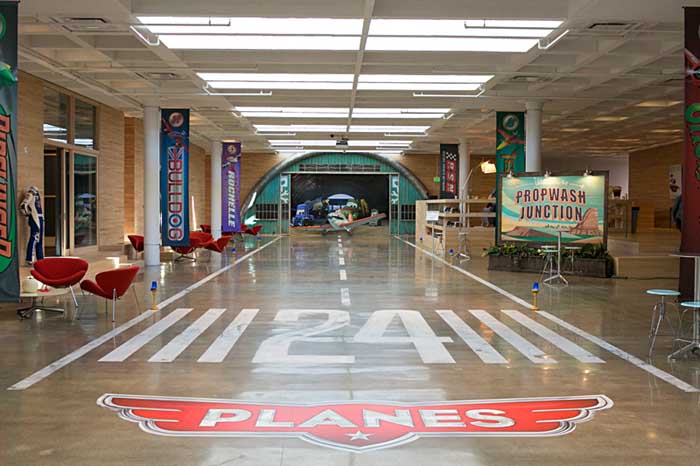 I honestly learned so much about the background of how Disney’s PLANES movie was made, my head was spinning like a propeller – lol – ok maybe not literally but I was blown away by how much really goes into it. We were able to talk to Klay Hall and Traci Balthazor-Flynn, as well as Dan Abraham and Art Hernandez to learn about the creation and planning behind Planes. We also got to meet Jason McKinley and Thomas Leavitt who were able to show us the steps and background of taking the drawing the artists come up with and turning it into a 3-D animated film. 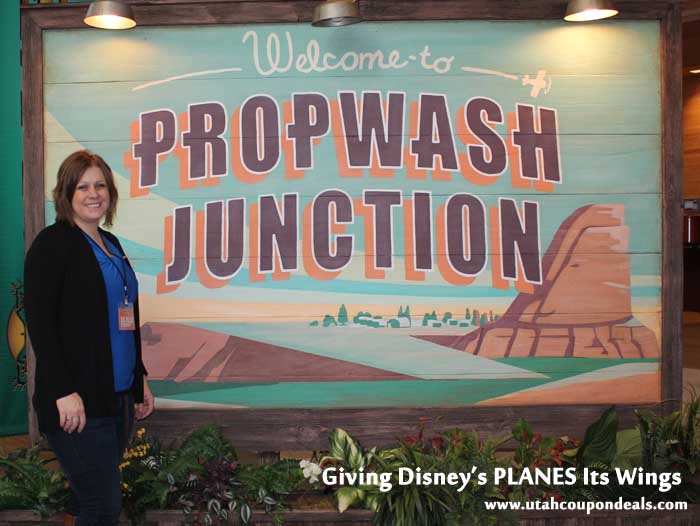 The Disney Toons Studios is amazing! The whole place was decked out in PLANES and it really made you feel like you were there! From the signs and cutouts that they had everywhere to the models hanging from the ceiling it was an amazing experience. (If you notice on the sign above it looks like an airplane with the mountain in the back as the tail and then the plane wing is the slide of the mountain). COOL HUH? 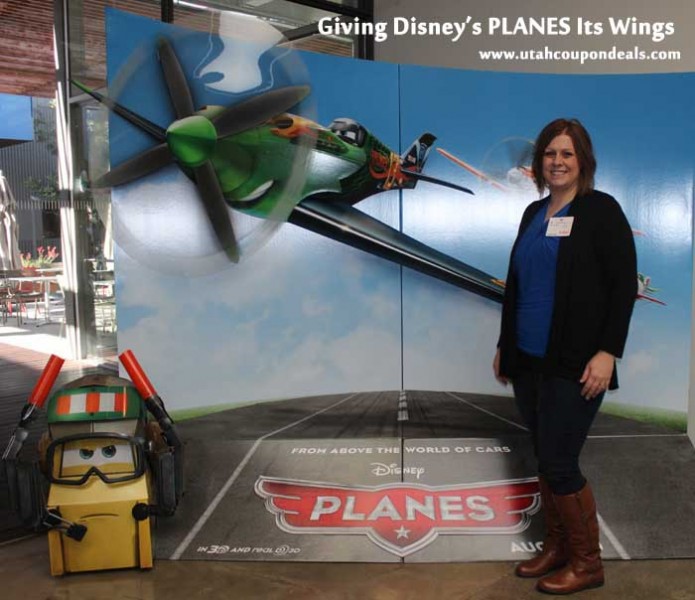 You may not know this but the Disney team had to do a LOT of research on planes to learn as much as they could about them. Everything from sitting dimensions to how they flew, turned, landed and drove.

This means that the way the planes fly in the movie had to be realistic and monitored and go a certain speed and do things a certain to make them look realistic. (not like a road runner cartoon lol) 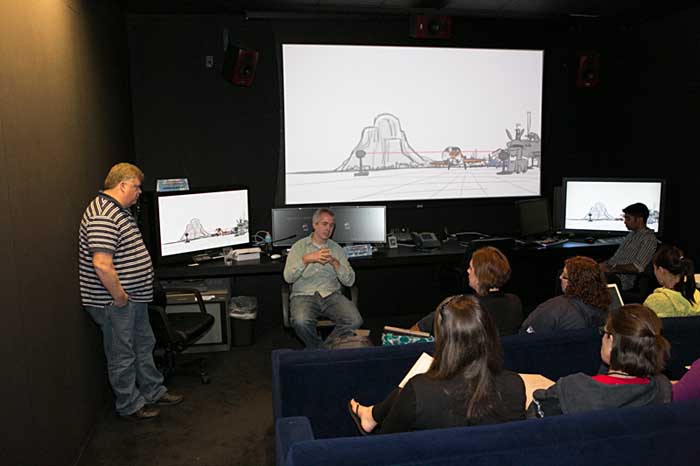 Jason went on to say that the artists will draw the series of panels to get the beads of the film. Editorial will then take those panels and do what’s called an Animatic. An Animatic tries to time out as best they can how long they think the sequence will take. And just get a good feel for it.

After we viewed a clip showing us an example of this – Thomas Leavitt told us that even though that looked really cool 90% of that stuff a real plane couldn’t possibly do in that amount of time. So we have to get in there and actually put in a real plane, have it turn the right rate and try to get the energy from that.

It amazes me how much research they did for this and how much they had to learn about planes and how they flew in order to make this movie realistic to the watchers and pulls us into the experience. 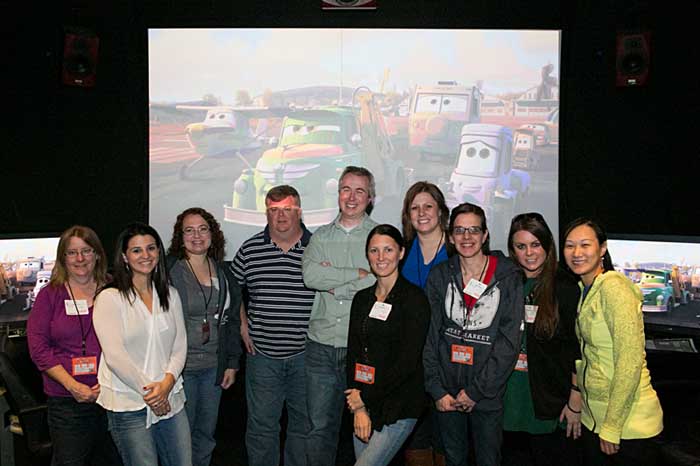 Jason McKinley goes one to tell us that the scene feels bigger and bigger and more realistic in the next sequence. On this particular case the shooting style we went for was more like an ESPN sporting event. So we placed cameras throughout as if we were really filming it for real. And we placed cameras on the plane. 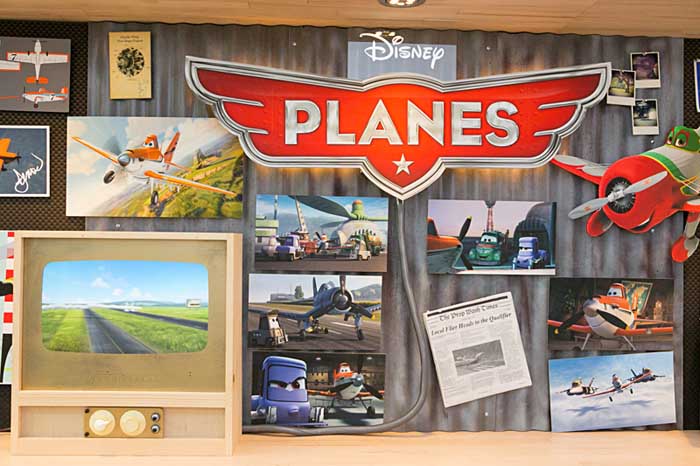 November is National Aviation Month. In honor of that, Disney will release Disney’s PLANES Movie

on November 19! Be sure to grab your copy!
Check out this trailer if you haven’t seen it yet: 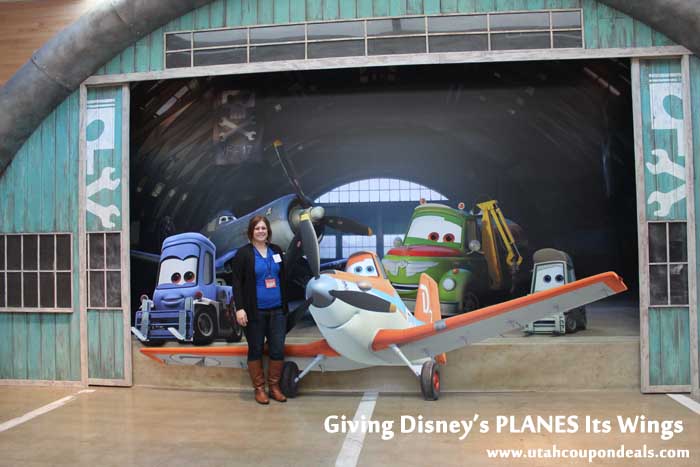 “Disney’s Planes” is an action-packed 3D animated comedy adventure featuring Dusty (voice of Dane Cook), a plane with dreams of competing as a high-flying air racer. But Dusty’s not exactly built for racing—and he happens to be afraid of heights. So he turns to a seasoned naval aviator who helps Dusty qualify to take on the defending champ of the race circuit. Dusty’s courage is put to the ultimate test as he aims to reach heights he never dreamed possible, giving a spellbound world the inspiration to soar.

Disney’s Planes comes out on DVD on November 19! 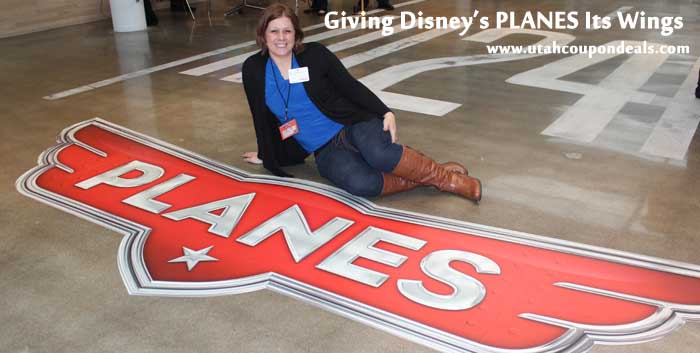 Photo credit are Disney on some and me on the others! 🙂

Sunday Newspaper Subscription only $0.38
Next Post: Use musicMagpie to sell your unwanted DVD’s, CD’s, and games for cash! »