I was able to be part of an amazing trip to San Francisco for Disney and do a fun press junket for Disney-Pixar’s Inside Out movie that comes out on DVD and Blu-Ray on 11/3. You will want to get it because it features the new short “Riley’s First Date” which I will talk more about next Tuesday, and about our interview with Kyle MacLaclan (voice of Riley’s dad) and Kaitlyn Dias (voice of Riley). Today I get to share with you our exclusive interview with Phyllis Smith (voice of Sadness) & Richard Kind (voice of Bing Bong). This interview with Phyllis and Richard was so fun. They interacted so well together and really made us all laugh. When Phyllis came in she was taking photos of our group with her phone, while we were taking pictures of her. It was so funny! 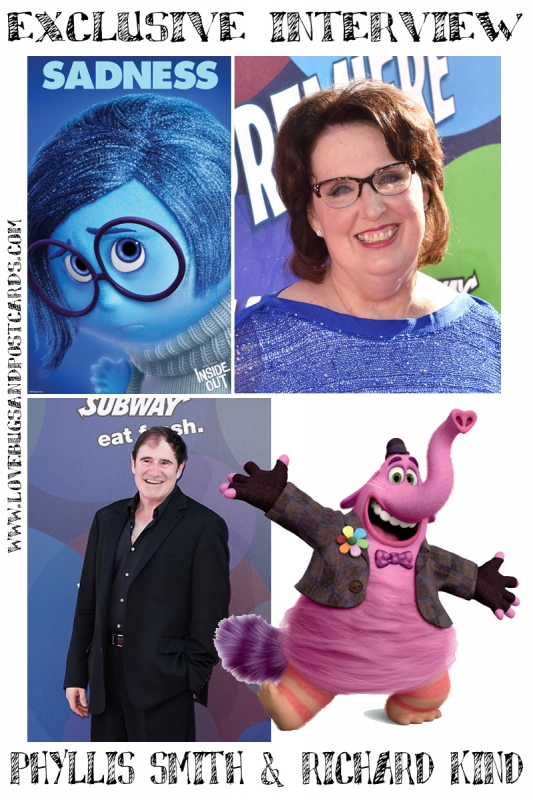 We wanted to know how they felt about the popularity of the characters. With the film being so big – Sadness is definitely someone people all around the world know and relate to. Bing Bong holds a special place in all of our hearts, as he is the center of one of the more touching parts of the film.  Phyllis and Richard were very funny right from the start. She said “I’ve seen it a couple of times. And I don’t really know how popular it is to be honest.” We were all a little surprised at that – but before we could say anything, Richard turns to her and asks “How popular your character is?”. As she is trying to confirm that is what she meant, he cut her off and said “All right, I’ll tell you. It’s popular.”. We all laughed. Just the way he said it was so funny. Phyllis replies with “I saw it in St. Louis. And just one or two people came up to me. I’m just kinda in a little vacuum. I don’t really know how it is. I’m glad that people are enjoying it. And every time I make somebody cry I go ‘yes’.” The last word done with a fist pump to emphasize. Since Sadness can be such a hard character to play, we wanted to know how she got into character. Phyllis told us “I’ve been asked before how I got to the different point. I can honestly say I didn’t like sit in the car and think of horrible things or anything before I went in. I really just tried to be truthful with the line or the scene that we were doing. And also Pete Docter is such a wonderful director. If I wasn’t at a point where he wanted me to be, he was able to say, okay, let’s try it this way. He was able to give really clear direction for me. So I attribute Pete Docter and the editors and I just tried to say the line as truthful as I could.” I could really feel this in her character.  She really resonated with not only me, but my kids and everyone else I have talked to. Because the characters have so much personality and emotions, we wanted to know – what part of the them went into their characters. Richard told us “Certainly my energy  because I can be loud. I think I’m more animated off stage than I am on. I happen to think that I’m a nice man , that I live my life with morality and ethics. So I’m think I’m more positive than I am negative. And I think that this guy is free of negativity. I think that there’s purity to this guy [Bing Bong]. I personally feel like Richard Kind was the perfect voice for Bing Bong. After watching the movie a few times he really is the perfect personality and voice for him. 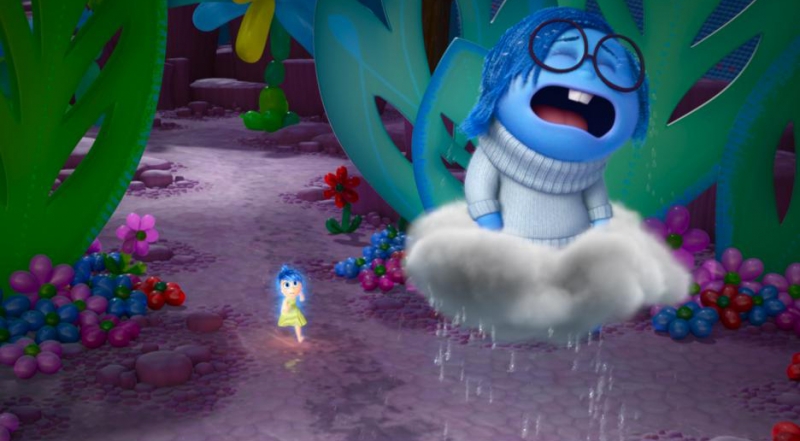 Phyllis’s career as an actor started later in her life, and so we wanted to know how she got her start. It is a beautiful story that I want to share with you. She starts by telling us that she got her start “By God’s grace. I say that honestly. I had been a dancer and got an injury so I knew that my career as a dancer was at the end of its life. I needed to work. I needed to pay my bills and my car insurance, my rent, my health insurance and all of that. I ended up taking some classes in commercials and such. I ended up as a receptionist. A friend of mine called and said, Phyllis, they need a mousey woman for one of the court shows. I said I don’t know if I can do this. I was in LA, there’s the valley and over the hill, to the Hollywood area. I only had certain length of time for lunch. I said I don’t think I can make it back and forth because I had this job at a aerospace defense company. And they don’t understand art, you know?” This made all of us laugh. I am sure we can relate to this part of her story so far!

She continues “And so in the haste of all of this I ripped a huge hole in my nylons. I walked into the casting director’s office and I said, ‘excuse me, are you looking for a mousey woman or a tacky woman?’ And so I didn’t get the job because I wasn’t mousey enough. But in the midst of all of that I told her I thought I’d be good in casting. She called me a year later after that audition. I ended up in casting for 19 years, working for really lovely, good casting directors.” I think that is amazing. It just goes to show that you can reach your dreams with hard work and determination.

That is how she got her start in the industry. She continues to tell us “When The Office came along, I was working for Allison Jones. We were doing the second day of pairing the leads up in the casting process. The director Ken Kwapis of the pilot said, ‘Phyllis, I want you to read the character of Pam’. And I went okay. Because I had read with thousands of actors over those 19 years, and I mean thousands. So when he asked me about reading the Pam character, in my mind, I’m going is somebody late? What’s the deal? And so I went in and I read. And I didn’t know, they didn’t tell me they were auditioning me. About two weeks later wardrobe calls and said I understand you’re playing the character of Phyllis. And I go, yes, I am! I’d been in casting long enough I knew when wardrobe called, you were sent a script that constituted a work call. So I knew it was actually a hire. I suppose I was honing a craft all those years that I didn’t know I was honing. I was reading with actors and knowing what worked and didn’t work. In all seriousness I think God knew the inner desires of my heart and allowed me to have a new career in my older age.” This is so inspirational and really warms my heart. I love that they cast her in The Office – she did such a great job in that role and has done an amazing job as Sadness as well! 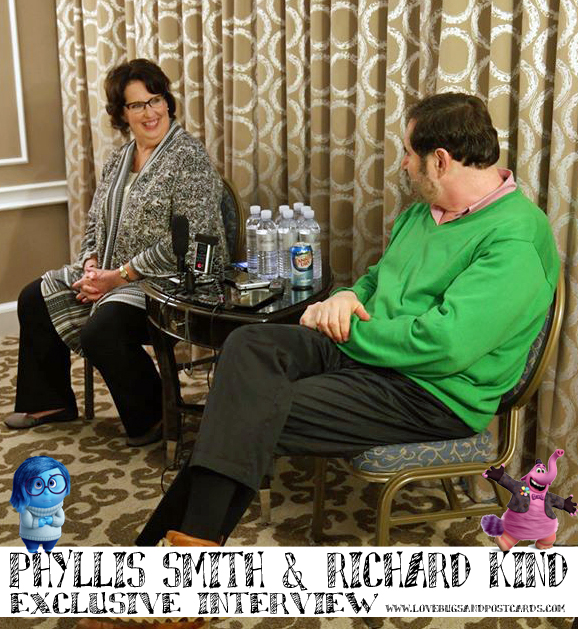 The interview with Phyllis Smith and Richard Kind was great. It was one of the best interviews I have been a part of. I really loved how funny and genuine they were. After the interview we were able to gather around and take a group photo with them. Remember, Inside Out comes out November 3 – so be sure to order it now or head out and get it next Tuesday! 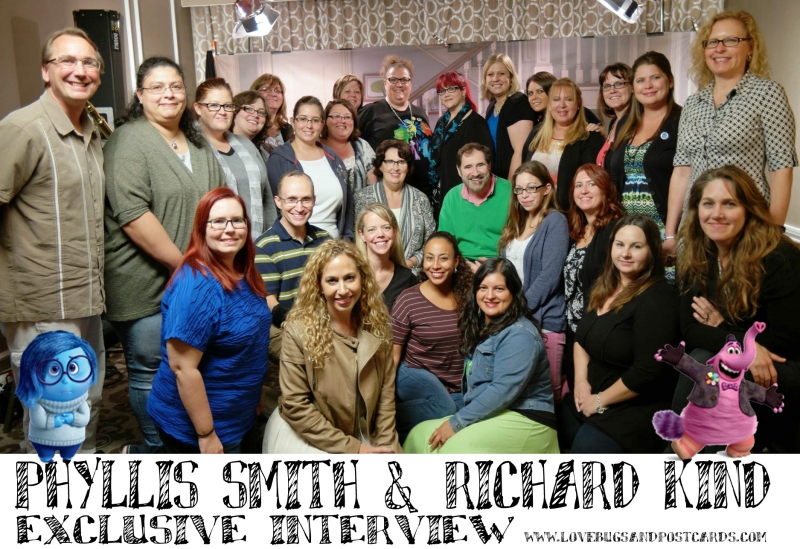 If you haven’t seen the movie yet – here is more information about it and the trailer: