Earlier this week, I was in LA for the red carpet premiere of Disney’s The Nutcracker and the Four Realms. You can read all about that experience here. Next week we will be sharing our interviews with Mackenzie Foy (“Clara”) and Misti Copeland (“The Ballerina”) as well as some other fun things we were able to do. Today we are sharing our The Nutcracker and The Four Realms movie review. I am sharing a few things that may be considered spoilers – but I want you to be informed. 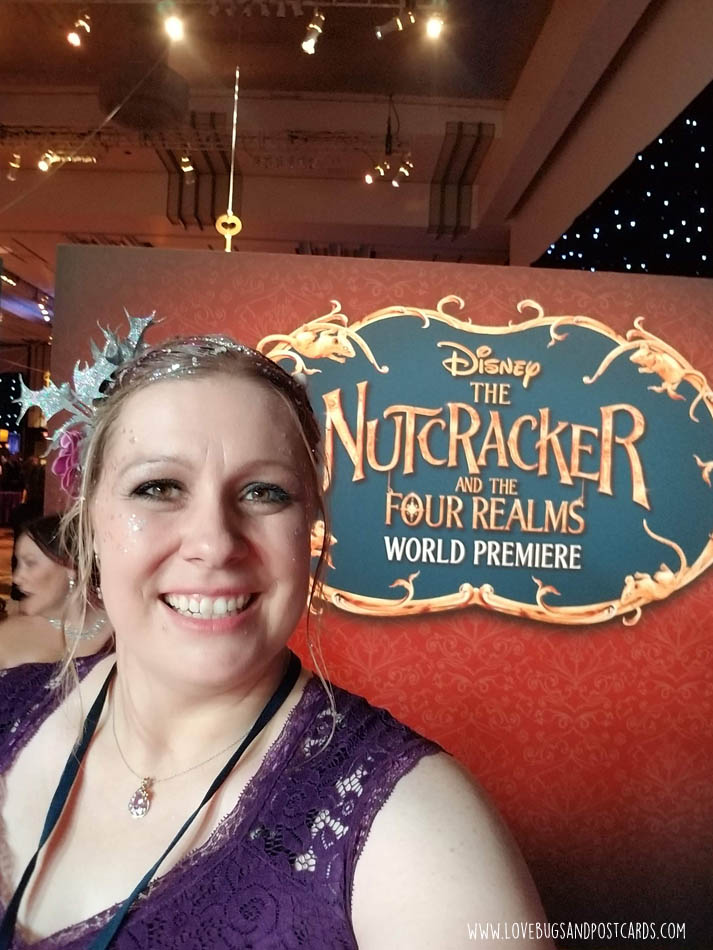 First of all, the movie is appropriate for all ages. There are a couple of mildly intense scenes with mice at the beginning, but they are over quickly and later the mice become friends so they are shown in a better light so the kids won’t be afraid. There are a couple of fighting scenes with Tin Soldiers but nothing graphic or scary. There is also a large robotic Mother Ginger, but I didn’t see this as scary or frightening – just whimsical.

With that out of the way, I will tell you that the movie follows the story of Clara (played by Mackenzie Foy), and her journey through the four realms to save the kingdom. She meets The Nutcracker/Phillip (played by Jayden Fowora-Knight) very soon after arriving in the Four Realms and he stays with her throughout most of the movie. 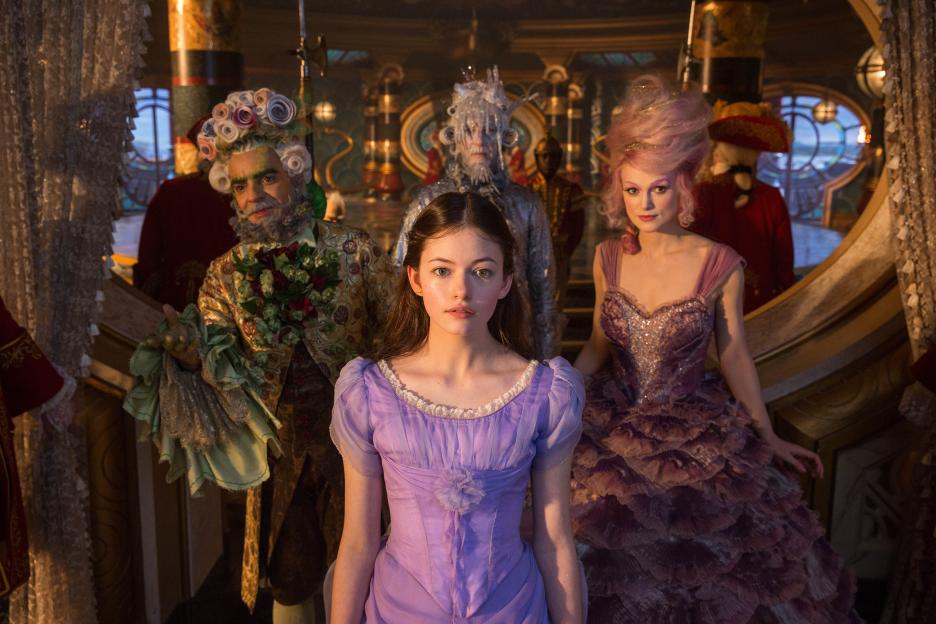 Clara herself is a young teenage girl who has recently lost her mother. Her father, brother Fritz and sister Louise are also struggling each in their own way. The story starts off with Clara having a hard time accepting her mother being gone and at the end of the movie, after her time in the realm and getting to know her mother and herself better is able to better deal with her grief and bond with her father in a new way. This brings the family closer and is a sweet ending to the movie.

Her grandfather (played by Morgan Freeman) tells her about a present Clara gets for Christmas from her late mother, and helps her find her way to the key. The movie is about her journey through the four realms and then back home again. Mackenzie and Jayden have a great on-screen chemistry and I really enjoyed them together.

Misti Copeland does an incredible job as the ballerina and is a lot of fun to watch. She does a routine during the movie, telling the story of the Four Realms as well as at the end of the movie (so stay through part of the credits) so you can see both of them.

We also posted Disney’s The Nutcracker and the Four Realms Coloring Pages you can print out – so be sure to run some off for you and your kids and have a fun coloring party before (or after) you go see the movie!

About Disney’s The Nutcracker and The Four Realms:

All Clara (Mackenzie Foy) wants is a key – a one-of-a-kind key that will unlock a box that holds a priceless gift. A golden thread, presented to her at godfather Drosselmeyer’s (Morgan Freeman) annual holiday party, leads her to the coveted key—which promptly disappears into a strange and mysterious parallel world. It’s there that Clara encounters a soldier named Phillip (Jayden Fowora-Knight), a gang of mice and the regents who preside over three Realms: Land of Snowflakes, Land of Flowers and Land of Sweets. Clara and Phillip must brave the ominous Fourth Realm, home to the tyrant Mother Ginger (Helen Mirren), to retrieve Clara’s key and hopefully return harmony to the unstable world. Starring Keira Knightley as the Sugar Plum Fairy, Disney’s new holiday feature film “The Nutcracker and the Four Realms” is directed by Lasse Hallström and Joe Johnston, and inspired by E.T.A. Hoffmann’s classic tale.

THE NUTCRACKER AND THE FOUR REALMS opens in theatres everywhere today! 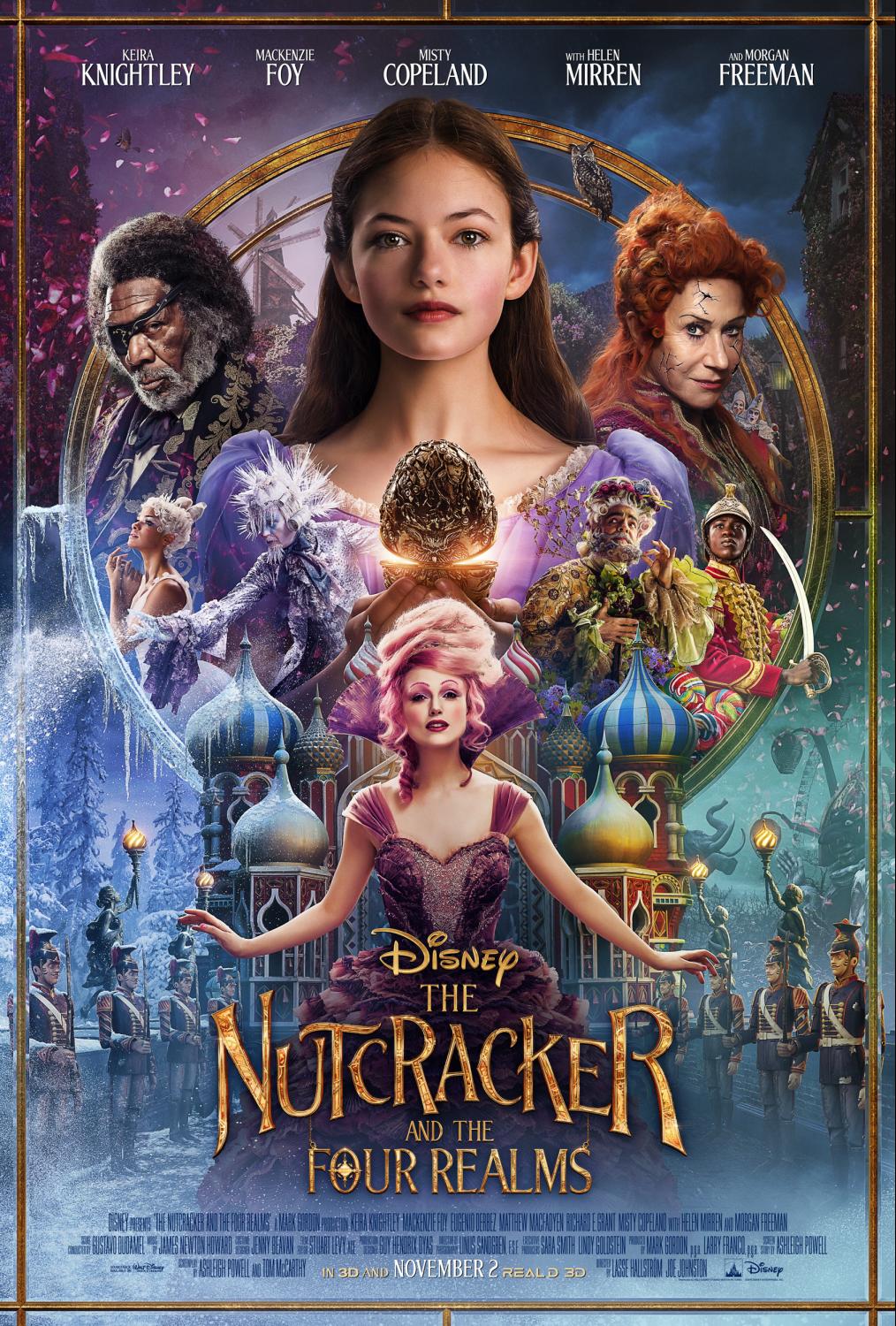