You are here: Home / Entertainment / Disney-Pixar’s Cars 3 is out on Blu-ray plus read this interview with Armie Hammer

We received a copy to review. All opinions are my own. Disney-Pixar’s Cars 3 is now available to buy on Blu-ray, DVD and Digital. We were able to see this movie in the theater, and ever since then, the kids asked when we could watch it again. They were thrilled when it came in the mail and immediately opened it and watched it. In the movie, Lightning McQueen goes on a journey that will ultimately change everything. I really love the storyline of the movie and the humor and lessons weaved throughout.

Disney and Pixar present CARS 3, a fast-paced new tale of Lightning McQueen, his classic CARS friends and a new spirited trainer Cruz Ramirez! Lighting finds himself pushed out of racing by a new generation of faster and younger cars and goes on a journey to discover where he belongs in this new type of high-octane competition. CARS 3– the third film in the now-iconic CARS film franchise- is now available to own!

To celebrate the release, we have a new interview with Armie Hammer (the voice of Jackson Storm) and a fun Cars 3 quiz! In Cars 3, Lightning McQueen is blindsided by a new generation of blazing-fast racers, led by the arrogant Jackson Storm. The seven-time Piston Cup winner and hero of Radiator Springs is suddenly sidelined and pushed from the sport he loves. To get back on track, McQueen will need the help of eager young racing technician Cruz Ramirez, inspiration from the late Fabulous Hudson Hornet and a few unexpected twists and turns of fate.

Cars 3 is fully loaded with unforgettable characters, spectacular animation, and turbocharged bonus extras. And the movie is about to race into homes on HD, 4K Ultra HD, Blu-ray and DVD. To celebrate the in-home launch of the high-octane hit, we catch up with Armie Hammer – the voice of Jackson Storm – to uncover the actor’s thoughts on road trips, recording sessions and the epic world of racing…

How does it feel to be the voice of Jackson Storm in the animated adventure, Cars 3?

It feels really great to be part of the Cars franchise. Not only is it a fun franchise, but it’s a franchise that I truly love. I remember when the first Cars movie came out. I loved the sense of nostalgia you felt when you watched the story unfold, and the fun road trip aspect to the movie.

How much Armie Hammer is there in Jackson Storm?

I’m definitely in there when it comes to the voice of Jackson Storm, but he isn’t the nicest of characters. He is a bit of a jerk, but I am not a jerk. That’s something in the character we kept pushing during the recording sessions, but I’m not like that at all.

How good are you at driving?

I’m pretty good at driving, not to toot my own horn. I’ve done some high-performance driving schools and race schools. My dad races cars, so driving has always been part of my life.

What was your very first car?

My first car was a Lexus IS300, which is one of those small cars. I was 16 when I got my first car, but at that point I’d been driving for a number of years. I grew up in the Caribbean. Down there, my dad taught me to drive stick when I was nine years old. I’ve been driving for a very long time!

Are you passionate about cars?

I love cars. Not in the sense of wanting to have the newest Ferrari or anything like that – but I love driving and I love road trips.

What’s been your most memorable road trip?

I crossed the North American continent from Los Angeles to the bottom of the Key West on a small, 150cc Vespa. The year was 2014, but I had nothing more than a sleeping bag and a tent strapped to the bike. Oh, and a few changes of underwear.

How long did the road trip take?

It took 21 days in total. We spent 12-hours a day riding in the middle of the polar vortex, so there were a lot negative temperatures until we got to Miami. It was very, very cold.

Were you alone on this epic road trip?

I wasn’t alone. There was a bunch of guys on Vespas. It was hellacious, but also one of the most fun experiences I’ve ever had in my life.

What excites you the most about the story of Cars 3?

In Cars 3, I love the topics the movie tackles. I love the message of the movie. I’m a father with a daughter, so it’s a lot of fun to see the idea of empowerment and strength. I love those themes.

Jackson Storm is a newcomer to the world of racing in Cars 3. He’s fast and sleek, but is newer always better?

No, probably not. And that’s another message of the movie.

Have you ever felt threatened by the arrival of a flashy newcomer?

I used to play on a lacrosse team called the Los Angeles Warriors. At one point, there was a guy who showed up on our team; he came from Virginia or somewhere like that. In Virginia, they play lacrosse way more than we play lacrosse on the West Coast, so this guy was really good. He was so good that all our team players would just try to get him the ball during every match. I wasn’t really threatened by the new guy. I really appreciated the fact that I didn’t have to run as much anymore, but it was interesting to see the newcomer take over.

Another message of the movie involves dreaming big. When you were a youngster, did you always dream about becoming an actor?

I always wanted to be involved in movies. Ever since I was 12 or 13 years old, that’s been my dream. I think it’s really important for people to pick a dream and go for it. Pick whatever you want to do in life and then pursue it relentlessly until you get there.

Is it important for youngsters to dream big?

Definitely. Dream big. Dream medium. Dream whatever, but have dreams. I think that’s important. The minute you stop dreaming, what are you aspiring to achieve? I feel incredibly lucky and blessed because everything worked out for me, but I know it doesn’t always work out for everyone. It’s important to try, though.

What advice would you give to youngsters who want to follow in your footsteps and become an actor?

As glamorous as anything might seem, your success is based on and dictated by the level of hard work you’re willing to put into it. The harder you’re willing to work, the more you can get out of it. It’s not an easy job, but it’s worth it. That’s the advice I’d offer.

In Cars 3, Lightning McQueen becomes a mentor to a new character named Cruz Ramirez. Who’s been your biggest mentor?

Every time I’ve worked on a movie, I’ve viewed my relationship with the director as the mentor of the project. Whether it’s David Fincher, Guy Ritchie or Clint Eastwood, they

are in charge. They are the boss. I’m probably a very annoying person to have on set because I’m always asking questions like, “Why are you doing it like that? Why are you using that lens? Why that light?” I love the idea that everybody knows at least one thing that you don’t. Everybody can be your mentor in one way or another.

Was Cars 3 director Brian Fee your mentor on this movie?

For sure. It’s a totally different world when you compare the way Pixar and Disney animated movies are made versus live-action movies. Pixar worked on Cars 3 for years and years and years. The amount of time and effort that’s gone into this movie is incredible. I’m very proud to be part of something so great.

What excites you the most about the in-home release of Cars 3?

You’re talking to a father of two here. Trust me, I’m way deep into deleted scenes and all the bonus features that come along with the in-home release. I love all the ‘making of’ extras. I love all that stuff.

What can fans expect from the bonus features packaged with the in-home release?

When a movie is done as well as this, you get so lost in the immersive experience that you often forget how it’s made. That’s what I love about the bonus features; the fact that you can delve into the making of the movie. I think it impresses people when you go back and show them the amount of work that actually went into the making of Cars 3. I also think it inspires them. It’s fun to get a behind-the-scenes look at something they truly enjoyed. For all those reasons, I can’t wait to see what’s in store for Cars 3. 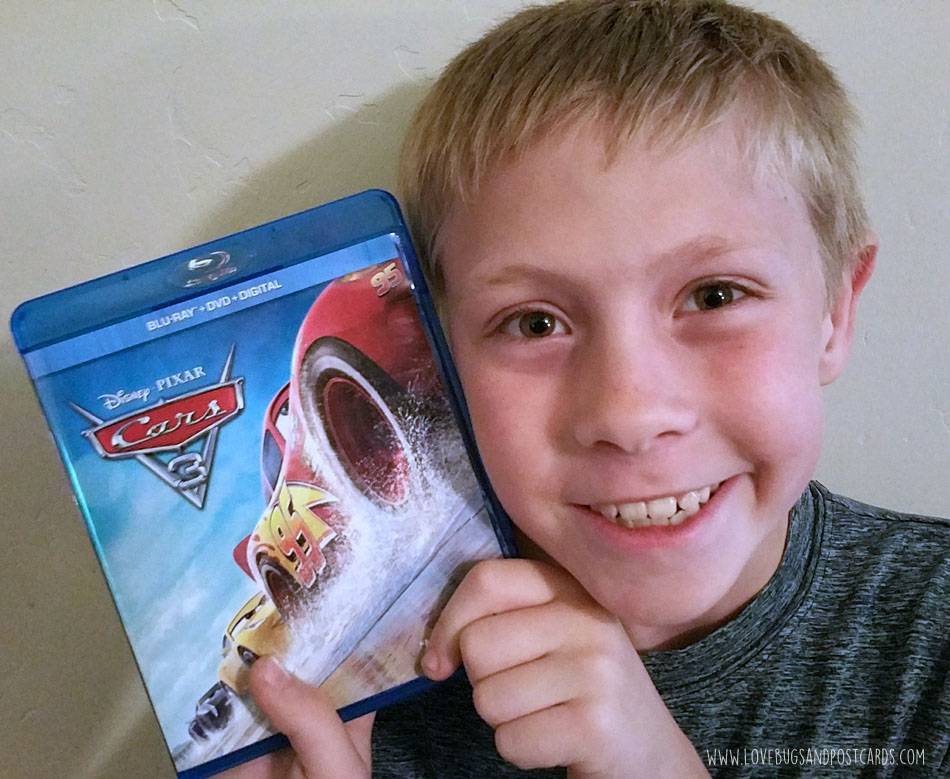 In honor of world-champion racer #95 on his date-sake 9/5, Disney•Pixar is proud to announce the in-home arrival of Disney•Pixar’s “Cars3”! “Cars 3” surged to the front of the pack opening weekend with audiences racing to see the legendary Lightning McQueen (voice of Owen Wilson) and spirited trainer Cruz Ramirez (voice of Cristela Alonzo) team up to beat the new generation of blazing-fast racers. Now, this summer’s high-octane hit cruises home—loaded with bonus features like the all new mini-movie starring the demolition derby legend Miss Fritter.

Race fans of all ages are invited to ride along with the “Cars 3” crew for hilarious and heartfelt extras, including an exclusive new mini-movie, “Miss Fritter’s Racing Skoool,” taught by the queen of the Crazy 8; a feature detailing how real-world race training influenced filmmakers; the journey taken by voice actor Cristela Alonzo and team while shaping tech-savvy trainer Cruz Ramirez; behind-the-scenes access to the story team who crafted Lightning McQueen’s third chapter; deleted scenes; and much more.

“Cars 3” is Disney•Pixar’s first in-home title released in stunning 4K Ultra HD format, the next-generation viewing format with four times the resolution of HD and exceptional high dynamic range (HDR), resulting in brilliant highlights, vibrant colors and greater contrast on compatible displays than ever before. With 4K Ultra HD, viewers will feel like they’re at the center of the action—holding their breath during the dramatic crash that launches Lightning’s journey, feeling the pulse-pounding action at the Florida International Super Speedway, and getting down and dirty at the Crazy 8 demolition derby.

Why you should get the NOW 64 Album…now!
Next Post: DIY Wood Cake Stand & Thanksgiving Decor Ideas