One of my favorite cartoon film series is hands down Despicable Me. The movies are so funny and all have great storylines. I love the Minions and we have become quite attached the girls and Gru and Lucy. Despicable Me 3 introduces a new character that you will fall in love with immediately – Dru. Gru’s twin brother. You will love how the story unfolds and how these two brothers learn how to accept each other and become not just friends, but family.

FROM THE HIGHEST-GROSSING ANIMATED FILM FRANCHISE OF ALL TIME, GRU AND HIS MINIONS MAKE MERRY MAYHEM IN THE YEAR’S #1 ANIMATED COMEDY 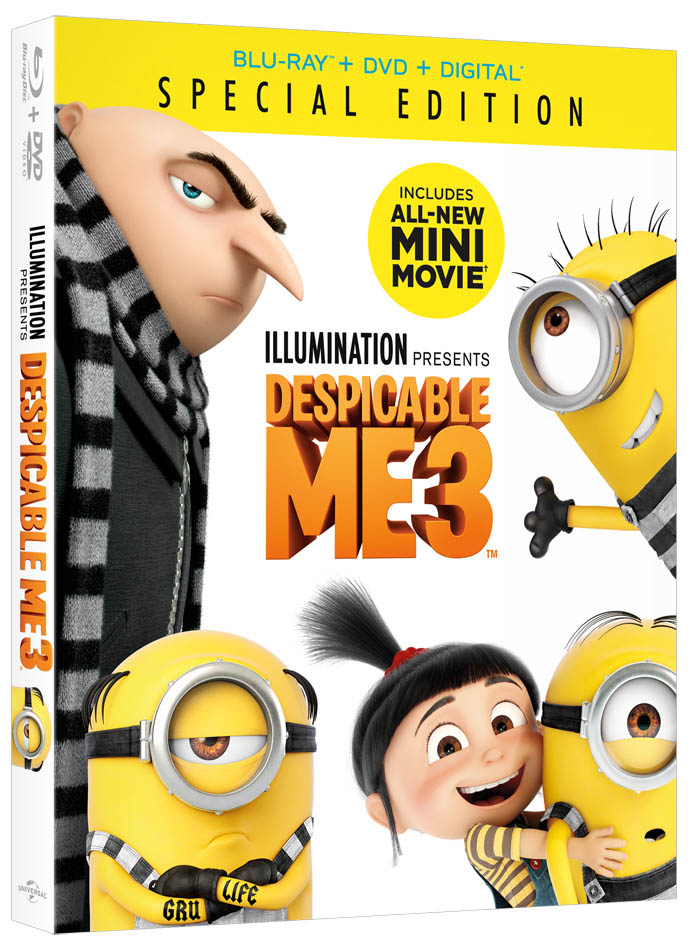 Illumination and Universal Pictures Home Entertainment present Despicable Me 3 on Digital and Digital 3D November 21, 2017 and on 4K Ultra HD, Blu-ray™, DVD and On Demand December 5, 2017. The characters beloved by everyone – Gru, his wife Lucy, their three adorable daughters—Margo, Edith and Agnes—and the Minions provide hours of family fun in this heartwarmingly subversive comedy from Academy Award®-nominated producer Chris Meledandri (Despicable Me Franchise) and directors Pierre Coffin (Despicable Me Franchise) and Kyle Balda (Minions 1 & 2, The Lorax). Hailed as “the best Despicable Me movie yet,” by Ali Plumb of BBC Radio 1, with over $949 million in global ticket sales, Despicable Me 3 is the ultimate holiday gift, with almost an entire hour of exclusive bonus features including an all-new mini-movie, a never-before-released deleted scene, and much more!

Illumination, the studio that brought you Sing, The Secret Life of Pets and the Despicable Me franchise, continues the adventures of Gru and his family in Despicable Me 3. After he is fired from the Anti-Villain League for failing to take down Balthazar Bratt (Trey Parker, “South Park,” Team America: World Police), the latest evil mastermind to threaten humanity, Gru finds himself in the midst of a major identity crisis. But when a mysterious stranger shows up to inform Gru that he has a long-lost twin brother — a brother who desperately wishes to follow in his twin’s despicable footsteps — the former super-villain rediscovers just how good it feels to be bad.

RELATED  What I learned today: Teaching my daughter the value of a dime

Despicable Me 3 will be available on 4K Ultra HD in a combo pack which includes 4K Ultra HD Blu-ray™, Blu-ray™ and Digital. The 4K Ultra HD will include all bonus features on the Blu-ray™ disc.