You are here: Home / Entertainment / Check out this Selfie of #Aladdin Cast Members: Will Smith, Mena Massoud, Naomi Scott and Marwan Kenzari

One of my all-time favorite cartoons from when I was little is being remade into a live action movie starring none other than Will Smith. These two are going to be an amazing combination along with the rest of the lineup. Casting for ALADDIN, the live-action adaptation of the studio’s animated classic, is complete and production is currently underway at Longcross Studios outside London. It is slated for release in 2019. Check out this selfie of ALADDIN cast members Will Smith (“Genie”), Mena Massoud (“Aladdin”), Naomi Scott (“Princess Jasmine”) and Marwan Kenzari (“Jafar”) that Will Smith posted on his Facebook page: 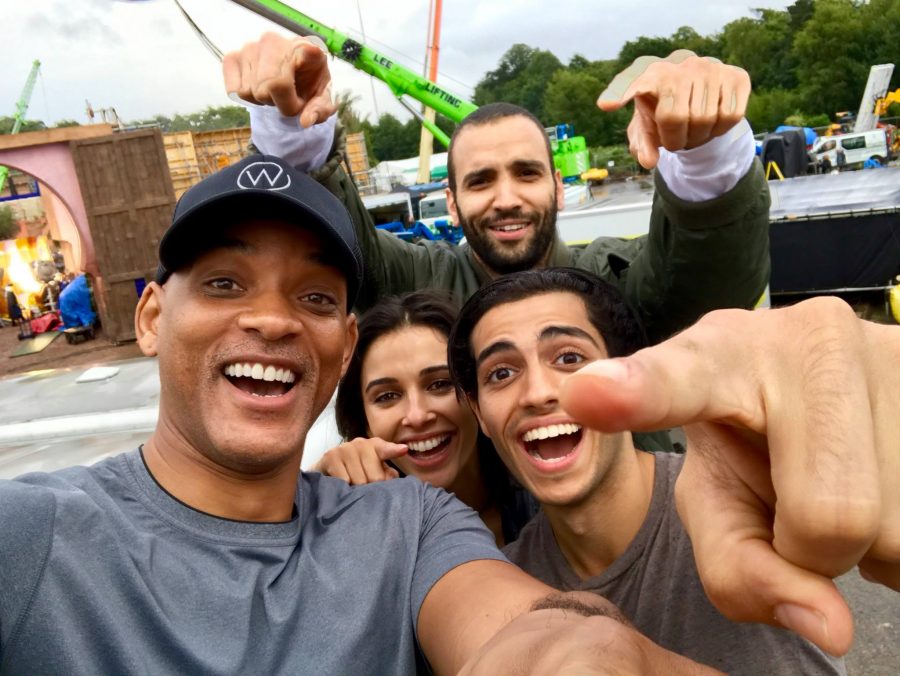 The “Aladdin” cast includes: Two-time Oscar® nominee Will Smith (“Ali,” “Men in Black”) as the Genie who has the power to grant three wishes to whoever possesses his magic lamp; Mena Massoud (Amazon’s “Jack Ryan”) as Aladdin, the hapless but lovable street rat who is smitten with the Sultan’s daughter; Naomi Scott (“Power Rangers”) as Princess Jasmine, the Sultan’s beautiful daughter who wants to have a say in how she lives her life; Marwan Kenzari (“Murder on the Orient Express”) as Jafar, an evil sorcerer who devises a nefarious plot to unseat the Sultan and rule Agrabah himself; Navid Negahban (“Homeland”) as the Sultan, the ruler of Agrabah who is eager to find a proper husband for his daughter, Jasmine; Nasim Pedrad (“Saturday Night Live”) as Dalia, Princess Jasmine’s hand maiden and confidante; Billy Magnussen (“Into the Woods”) as Prince Anders, a suitor from Skanland and potential husband for Princess Jasmine; and Numan Acar (“Homeland”) as Hakim, Jafar’s right-hand man and head of the palace guards.

For over 90 years, The Walt Disney Studios has been the foundation on which The Walt Disney Company was built. Today, the Studio brings quality movies, music and stage plays to consumers throughout the world. Feature films are released under the following banners: Disney, including Walt Disney Animation Studios and Pixar Animation Studios; Disneynature; Marvel Studios; and Lucasfilm. The Disney Music Group encompasses the Walt Disney Records and Hollywood Records labels, as well as Disney Music Publishing. The Disney Theatrical Group produces and licenses live events, including Disney on Broadway, Disney On Ice and Disney Live!.

Arrow: The Complete Fifth Season – Own it today on Blu-rayTM and DVD
Next Post: Encouraging your girls to be unique