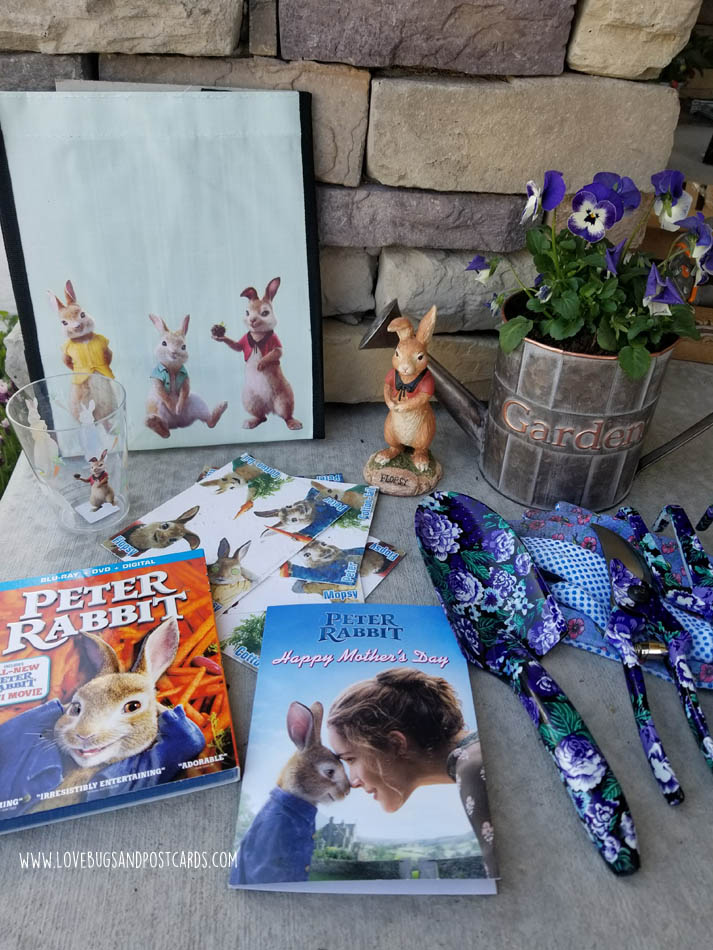 We received the items for review. All opinions are my own. Mother’s Day is coming up (one of my favorite holidays 😉 ) and I was blown away by the special box of gifts I got from my friends at Sony for the Peter Rabbit movie! It was full of fun things like gardening tools, gloves, a watering can planter, seed cards, plates, a cup, the movie and more!! We have had so much fun with all of it!

We got a beautiful viola plant and planted it in our new watering can planter, and I really love how it looks. My new gardening tools have been so nice to use! I have been doing a lot of gardening and yard work and the gloves and tools and really helped make my life easier and they are so pretty – I feel so fancy using them :). 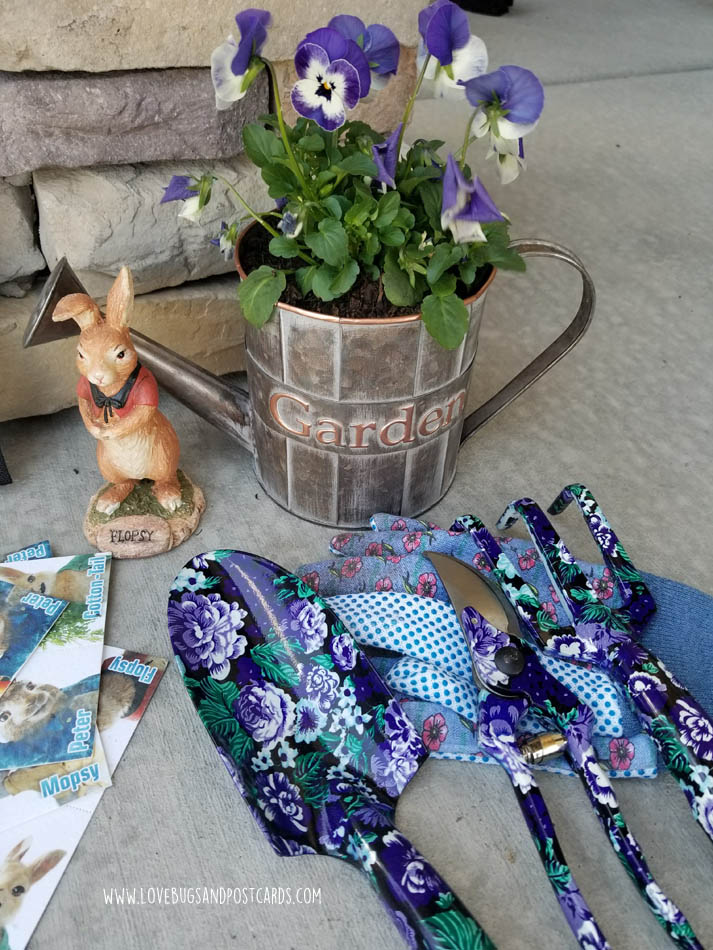 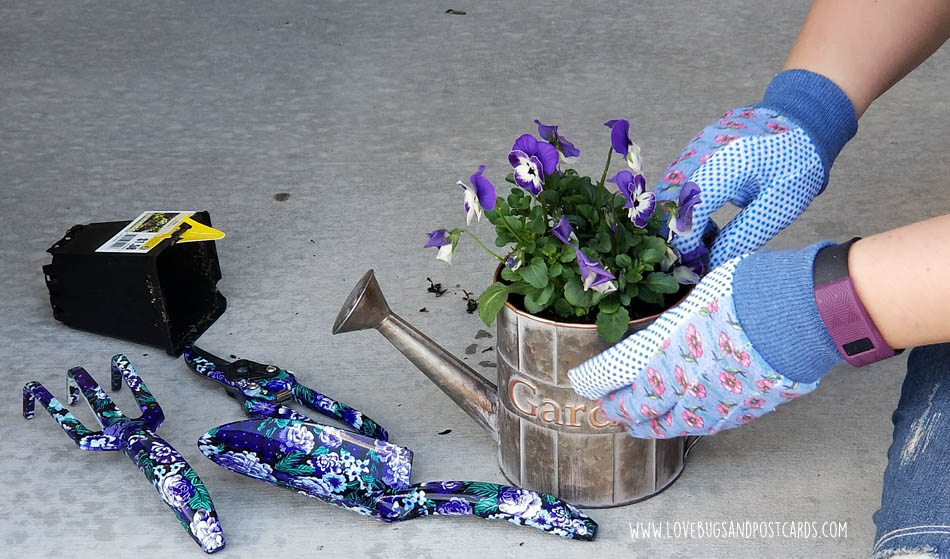 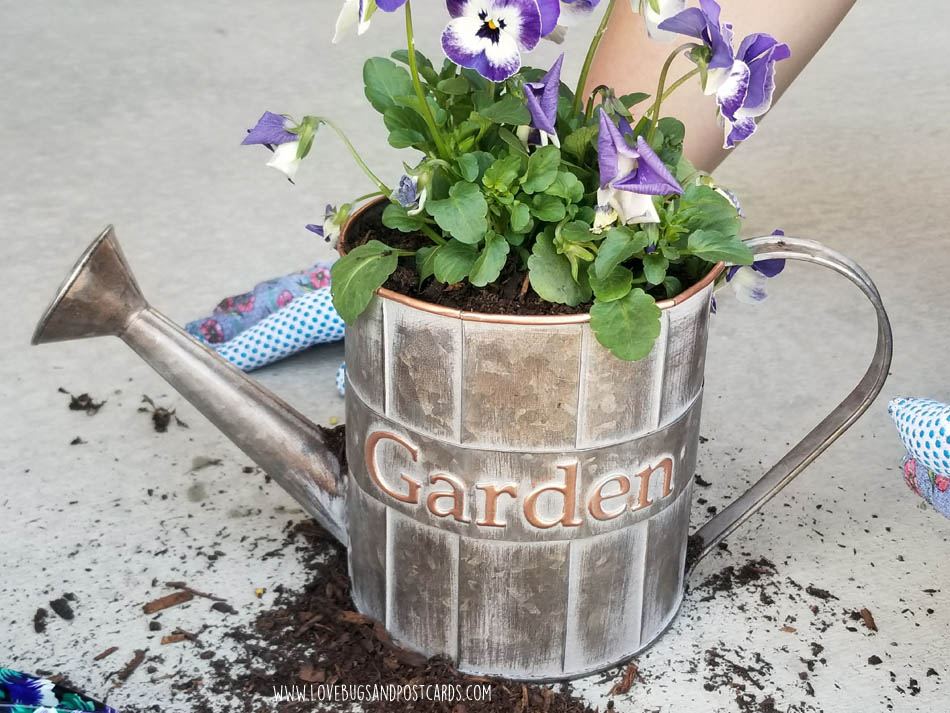 The Peter Rabbit plates from Plus World Market are amazing! My kids have already picked out theirs – since there are four of them, 3 girls and a boy, and the plates are three girls and boy – so it worked out perfectly. We have already planned a fun picnic for this weekend using the plates and cups. 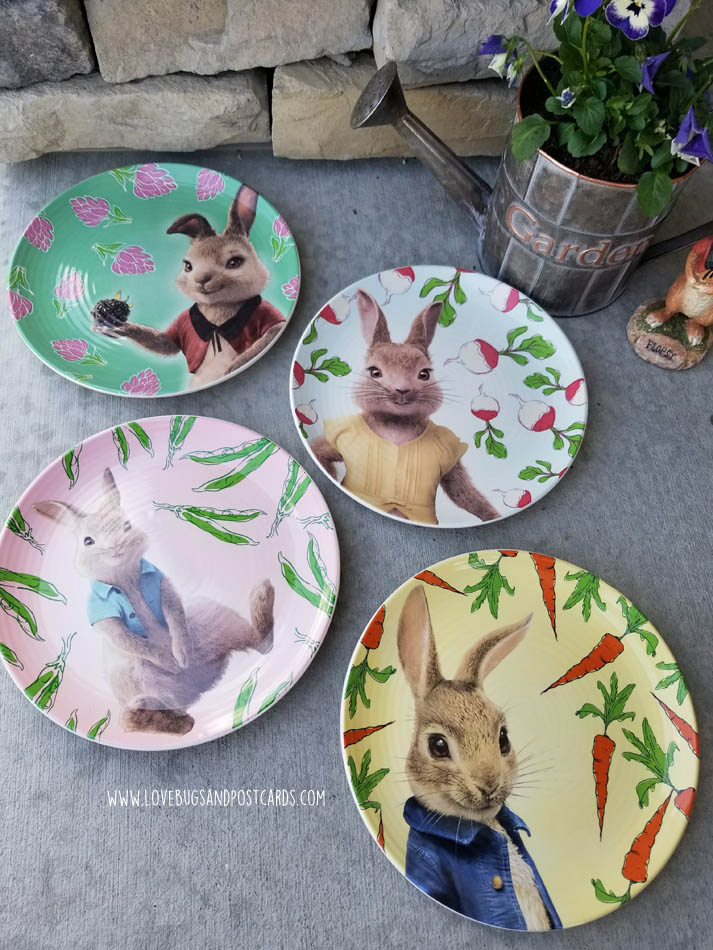 Now to the Peter Rabbit movie. We got to sit down and watch it as a family, and I have to tell you that it was really funny! Domhnall Gleeson did a great job as Mr. McGreagor. I loved the rabbits and the relationship they developed with him.  James Corden (voice of Peter Rabbit) and Rose Byrn (Bea) also added a lot to the movie!

James Corden (Into The Woods, Trolls) stars as the beloved rebellious rabbit in the contemporary feature film adaptation PETER RABBIT ™, debuting on digital April 20 and on 4K Ultra HD™, Blu-ray and DVD May 1 from Sony Pictures Home Entertainment. In addition, the physical skus will also include digital versions of the movie, redeemable via the all-new Movies Anywhere App. Experience all the mischief in McGregor’s garden with Corden voicing Peter Rabbit, Margot Robbie (I, Tonya, Suicide Squad) as Flopsy, Elizabeth Debicki (The Great Gatsby, Guardians of the Galaxy: Vol. 2) as Mopsy, and Daisy Ridley (Star Wars: The Last Jedi) as Cotton-tail. Rose Byrne (Bridesmaids, Spy) and Domhnall Gleeson (Star Wars: The Last Jedi, Ex Machina) also star as Bea and Mr. McGregor.

Exclusive to the Blu-ray and Digital releases of PETER RABBIT ™ is “Flopsy Turvy” – an all-new original mini movie featuring Peter’s precocious sisters, Flopsy, Mopsy and Cotton-tail, narrated by Margot Robbie as Flopsy. When Flospy sets out to prove that anything her sisters can do, she can do better, she soon learns that when times get tough, sisters come together. With the Digital, Blu-ray and DVD releases, fans can watch “Mischief in the Making” – a special peek behind-the-scenes with the cast, director and animators as they discuss bringing these beloved and modern characters to life.
The entire family can also dance along to the film’s theme song “I Promise You” sung by James Corden, in the featurette “Shake Your Cotton-tail.”

Synopsis:
Peter Rabbit, the mischievous and adventurous hero who has captivated generations of readers, now takes on the starring role of his own cute, contemporary comedy with attitude. In the film, Peter’s feud with Mr. McGregor (Domhnall Gleeson) escalates to greater heights than ever before as they rival for the affections of the warm-hearted animal lover who lives next door (Rose Byrne). James Corden, with playful spirit and wild charm, voices the character of Peter, alongside Margot Robbie, Elizabeth Debicki and Daisy Ridley voicing the roles of the triplets, Flopsy, Mopsy and Cotton-tail.

Blu-ray and Digital Bonus Materials Include: