This week we have already shared Behind-the-scenes look at Disney’s Moana and Disney’s Tangled: Before Ever After + Interview with Chris Sonnenburg & Ben Balistreri and today we get to share more with you about Season 6 of Baby Daddy, the baby shower party we got to attend with Chelsea Kane (“Riley Perrin”), Derek Theler (“Danny Wheeler”) and Tahj Mowry (“Tucker Dobbs”) and our Q&A. We also played a fun game of charades and these three were the ones acting everything out. That was hilarious! The season 6 premiere of Baby Daddy is great! Fans are going to love this season and all of the loose ends that it ties up. There is a lot of happiness, laughter, tears and joy. Be sure to catch up on the other seasons if you haven’t seen them yet and then watch Baby Daddy Mondays at 8:30/7:30c on Freeform. 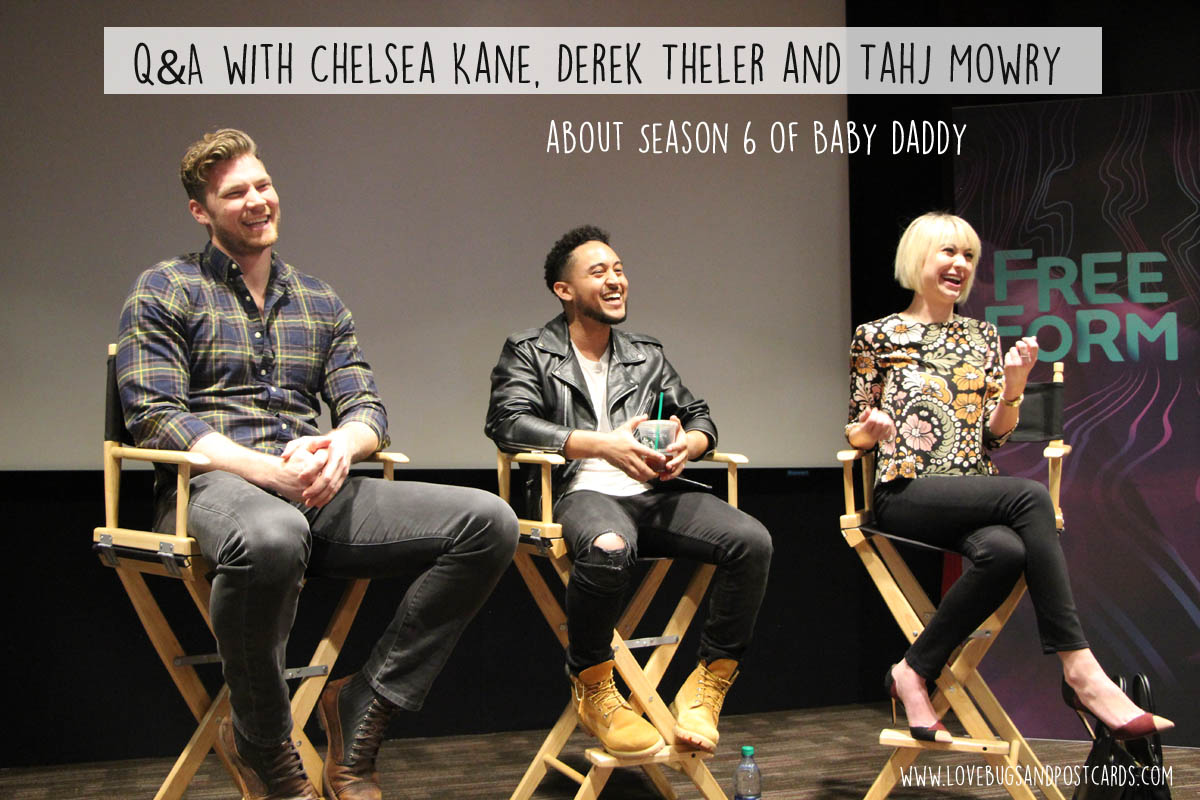 Here is some of the Q&A:

What can we expect besides pregnancy in season 6?

Yeah, that was a big one for me. I mean it was so fun to be in the ballet the whole time but I think it’s a big season for us. For anyone that’s been sticking with us these last one hundred episodes. I mean to find, I think a lot of storylines that were there from, you know, the pilot, are really wrapping up this season in such a beautiful way. So, I think the fans will enjoy it checking it out.

Yeah.  Yeah and I think we kind of dive a little bit deeper into each character. For Tucker, specifically, we find out a little bit more about him and his in a different space mentally than he normally is. He’s not his upbeat self. [01.22]

Yeah, Danny, I mean, he’s trying to handle his pregnant girlfriend, which is challenge enough for most people especially Danny. But and then Ben is kind of searching still for his love that he happened to cross at the end of the last season. Yah, so that’s in a moment throughout the whole season and the Melissa is, she’s basically trying to.

Well, yeah, Brad’s in prison. Brad goes to jail and I’m defending him. So, that’s also a big storyline for Riley this year, is, not only is she hormonal and trying to hide her pregnancy, which I also think is, you know, a hot button issue. She is worried that once her boss finds out that she is pregnant that she’s just gonna look like one giant case of maternity leave. So, she’s trying to hide her pregnancy and on top of that defend Mrs. Wheelers husband in court. So, she’s kind of an emotional train wreck for most of the season. 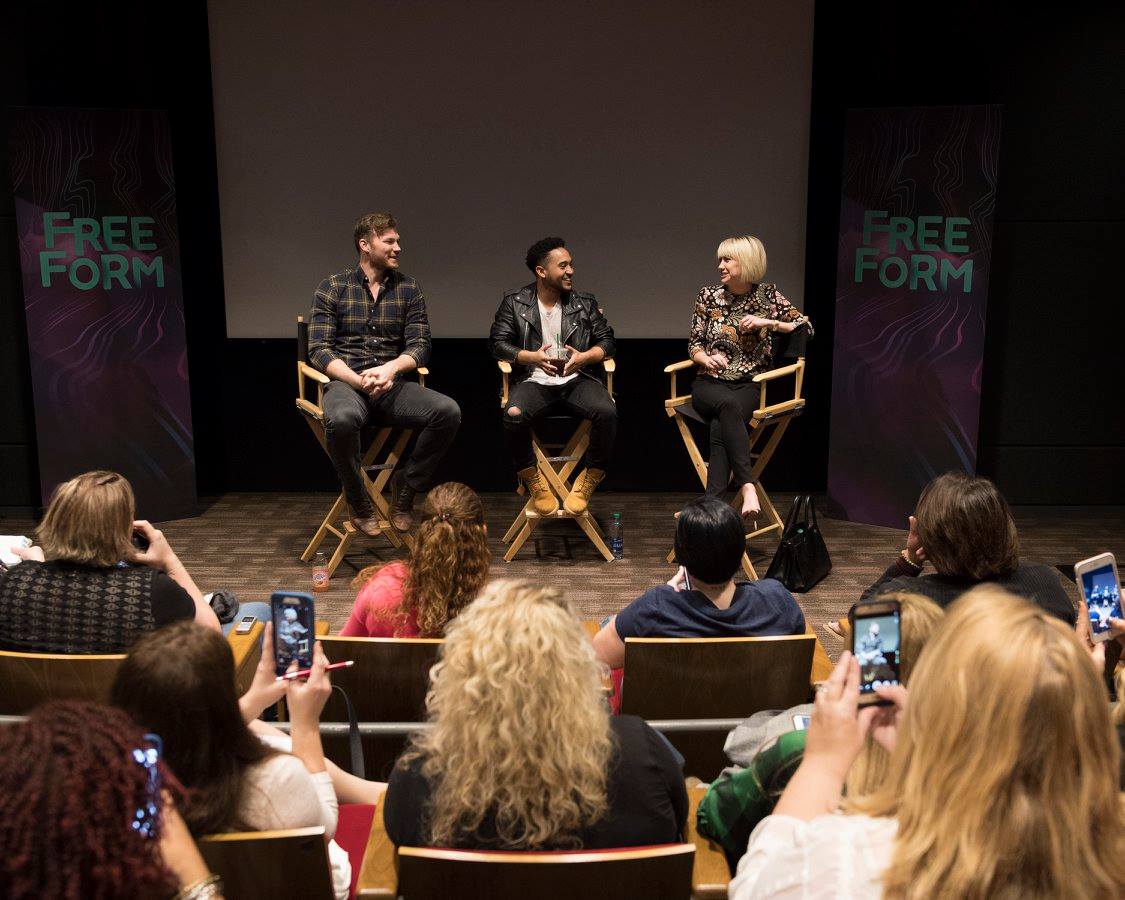 How was it with the little girl on the set? I mean you guys must have a ton of fun with her.

But it’s cool this season especially because we have in the past gotten new babies when it’s time to start another season and these babies have been with us now for three season I guess. And so, they got, they get to grow with us and they’re given lines.

No, we love our girls so much and we’re super close with their family. Yeah, I think, yeah, every season we’ve had a new baby because I think we wanted to be able to carry them all the time and kind of be in control of the situation a little more. And our little girls just really became such an integral part of the show. I mean, they started talking and doing all these things and it’s like we cannot find another baby that does this and says hello or goodbye every time you walk in and out the door. We, yeah so, we really fought to keep them. It’s very, I’ve already been, they turned four yesterday and I just feel so close to them and it’s like can’t wait to watch them go to high school and graduate and yeah, I love them.

Do you have any input with what happens with the show and the script?

Well, we always kind of make the joke now that the lines between our characters and our real selves have been completely blurred at this point. We’ve been so lucky to have pretty much the same set of writers all six seasons and we’re really good friends with them too. So, after the show on Friday night, we had, you know, we all like go into the bar to celebrate or having dinner with each other over the hiatus and often times we’ll come in on Monday morning, you know, sit and having lunch with the writers and the crew. Telling some wild story that happened and sure enough, two weeks later, it’s in the show.

So, that I guess we input in that way by default and yeah, they’re very generous with letting us improv. Of course, working with Melissa Peterman, who’s kind of the queen of improv. But usually on Friday nights when we’re shooting in front of the live audience, once we get it one time the way it is on the page, we kind of cut Melissa loose and then it’s like everybody just brace yourself.

What’s something that you wanna see your characters do before the show eventually, hopefully in a long time ends? Obviously, give birth.

Yeah, the happens, guys that does happen. So, that was something that I definitely wanted this season, once we established that Riley was pregnant. I wanted to see it through and not leave it on a cliffhanger. So, you do get to meet our baby and yeah and that was a really emotional day on set.

It was a super emotional scene for sure. A thirteen-day old baby.

Which was the scariest thing ever. I was, you know, the head thing and I was like oh god, so those were real just tears because I was so nervous. But that was something I definitely wanted to see happen.

For Tucker, I guess, you know, a lot of people are always like when’s he gonna fall in love, you know, when is he gonna meet that girl and this season that might happen. So, that’s something cool. I think fans are really like that.

For my character, I was hoping that Danny would like tie the knot with Riley. So, that’s something that I’m hoping for in the future

Yeah, it’s a good one. And also, you know, I love the relationship with Bonnie and Riley. It’s that great mother-in-law, like she’s so hard on her. And Melissa and I have talked since season one, of really wanting to have that breakthrough, where she’s, the reason she’s so hard on her is because she really loves her. So, that was something that Melissa and I got to have this year. The stuff we’ve always talked about wanting to do, we finally decided to.

And it’s, even though it’s like, and I’m not just saying this, I think it’s the funniest season we’ve done. It’s also like the most grounded I feel. And heartfelt and I think you don’t get that in a lot of multicam sitcoms nowadays. Right, it’s story and character and I think that scene with her and when you see it, it’s just like oh oh.

For a comedy, I cried a lot.  On screen and off. It was just a lot yeah, a lot was going on. I felt like I was really pregnant because I’d just fall apart at the drop of a hat.

RELATED  Oz The Great and Powerful - "Travel by Bubble" Preview

And I kind of thought you were also cause you’re wearing, like she was wearing it, you know, the whole suit, at all times.

I would wear it in rehearsals once it got really big and what Kat, our costume designer and I discussed at the beginning of it. Well, first of all it was a dream, it was an 11week pregnancy. But, you know, you look at Derek, his 6.5 / 6.6, and we wanted to make the joke that Riley is having a giant baby. And so, the last prosthetic belly that we ordered is actually what someone would wear if they were having twins, so we thought that and I asked her because I, you know, have never, I don’t have kids and I also am not, you know, really around anyone that’s pregnant.

So, all of my bellies were weighted. So, the last belly was like fifteen pounds, so you can, which was great, I loved it. I mean, I kind of thought I would have a core at the end of it, but it didn’t work out at all, it was kind of a pull on my back. But, you know, it really changes the way you walk and you could hear me grunting every time I was changing. [09.46]

There was the one scene to where I had to pick you up and run you out of a bar, out of the bar and that scene. I almost killed us, yes. Cause during rehearsal she’s, you know, sixty-five pounds and I can just throw her over my shoulder but when we actually had to shoot it, she had this belly on and it’s basically a backpack full of water. And I don’t know what had happened, I was, I don’t know, I was tired or something. And so, I heaved her up and started running and by the third take, it was like, we’re going down. Like I basically like ran myself into the wall and tried to make sure nobody died. We’re okay.

This season, they’ll be reaching a hundred episodes, which is a really cool, exciting milestone and they also just won the People’s Choice Award for favorite cable TV comedy, so congratulations to all of the cast and crew.

Hitting a hundred is just, it’s hard to come by these days, so that’s an amazing feeling for sure for all of us. But I think the People’s Choice Awards specifically was an amazing night. Like we got to be surrounded by all these extremely successful people in this business and people we look up to, we had to get to work the next day but we had like such a great time as a family.

This was a really fun interview and eating lunch with them and playing the baby shower games was even better. Derek sat at our table and it was fun to visit with him and get to know him better.

Disney’s Tangled: Before Ever After + Interview with Chris Sonnenburg & Ben Balistreri
Next Post: A mini tour of the Natural History Museum of Utah #explorenhmu