I love watching shows about nature and animals and so do my kids. Truth be told, I would love to fly them all over the world and let them experience everything, but it’s just not possible, and that is why I love shows like the PBS WILD ALASKA LIVE. It lets me immerse my kids into the experience like we were there and we learn so much. It gives them a greater understanding of the creatures of this world and enlightens their minds so that they can be more educated about a variety of subjects when they need it at school.

WILD ALASKA LIVE, premiered Sunday, July 23 (8:00 pm ET; 5:00 PT; check local listings for rebroadcasts). Over three nights (July 23, 26 and 30), PBS is turning the cameras on a must-see natural spectacle as thousands of animals like bears, wolves, beavers, moose, orcas, and eagles, gather to take part in Alaska’s amazing summer feast. Think of it as the world’s greatest vacation, without having to leave your couch or making the kids put on their mittens.

You’ll also be excited to know that WILD ALASKA LIVE is hosted by Chris and Martin Kratt – The Kratt Brothers – whose love of nature is contagious with today’s kids. They will deliver a family friendly show that will pique kids’ curiosities and introduce them to a part of the world they will dream of visiting.  For an ultimate family experience, WILD ALASKA LIVE will also be simulcast on the new PBS KIDS 24/7 channel and via live stream. Also be sure to tune into two new WILD KRATTS one-hour specials — WILD KRATTS: Creatures of the Deep Sea (July 23) and the all-new WILD KRATTS Alaska: Hero’s Journey  (July 26 and 30). If you missed them, be sure to check local listings for rebroadcasts or visit http://pbskids.org/wildkratts/videos to watch episodes and clips. 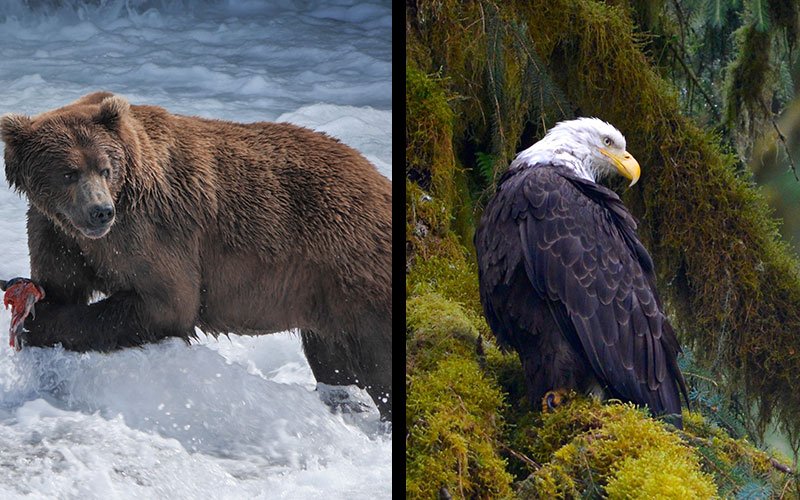 “We’re using live TV technology to amplify the story of one of nature’s great spectacles as it happens,” said Bill Margol, Senior Director, Programming & Development, PBS. “This cycle of feast and famine here in Alaska has been going on for millennia, but this is the first time PBS viewers have had the chance to see it live as it happens.”

Episode 1 focuses on the vast and majestic landscape of America’s largest and most rugged state.  Chris and Martin Kratt anchor the night from the Tongass National Forest.  Correspondent Liz Bonnin reports from Katmai National Park, one of the most remote locations in the United States, surrounded by bears gathering to feast upon the converging schools of salmon. Steve Backshall checks in from Glacier Lake where he tracks the progress of the salmon migration.

Episode 2 continues the adventure with hosts stationed outside the capital city of Juneau on the Mendenhall Glacier. The Kratt Brothers track bald eagles in Tongass National Forest and get experts’ views on how the overall 2017 feast season is progressing.  Steve Backshall helicopters onto the mammoth Juneau Icefield where he tracks the wildlife that lives in, under and around it, and reports on its impressive summer melting patterns that set the entire feast into motion each year.  Liz Bonnin continues to explore bear behavior and looks for wolves.

Things wrap up in Episode 3, when the team documents changes happening across the state in just one week and find answers to the questions raised in earlier episodes. The salmon are expected to be in full-run mode, working hard to overcome large beaver dams as bears and wolves make rivers across the state into their own personal cafeterias. Mission wolf migration and health is featured. Liz Bonnin checks in for the last time with bears, tracing how they go from salmon fishing along the river banks to salmon feasting in the woods.

WILD ALASKA LIVE will encompass state-of-the-art filming technologies and live reports from the air, by boat, and from the rugged Alaskan terrain. In addition to the live portions of the programs, PBS and BBC crews, as well as the hosts and correspondents, have created short taped features in the past few weeks that are designed to enhance each live broadcast by telling the bigger stories of each unique species.

RELATED  New episodes of Splash and Bubbles premiering on #PBSKids

The Kratt Brothers are long-time PBS KIDS icons who are creators, executive producers and stars of the current hit series WILD KRATTS. They are joined on air by BBC correspondents Liz Bonnin and Steve Backshall, both of whom presented on the first PBS/BBC live collaboration, BIG BLUE LIVE in 2015.  A team of correspondents, scientists and wildlife experts will provide insights and perspectives on what viewers will see during the broadcasts. BBC’s version of the show airs several hours earlier on the same dates, giving UK viewers a sneak peek at the wildlife stories and breathtaking scenery PBS viewers in the US will see that evening.

All three broadcast episodes will live-stream simultaneously on www.pbs.org.