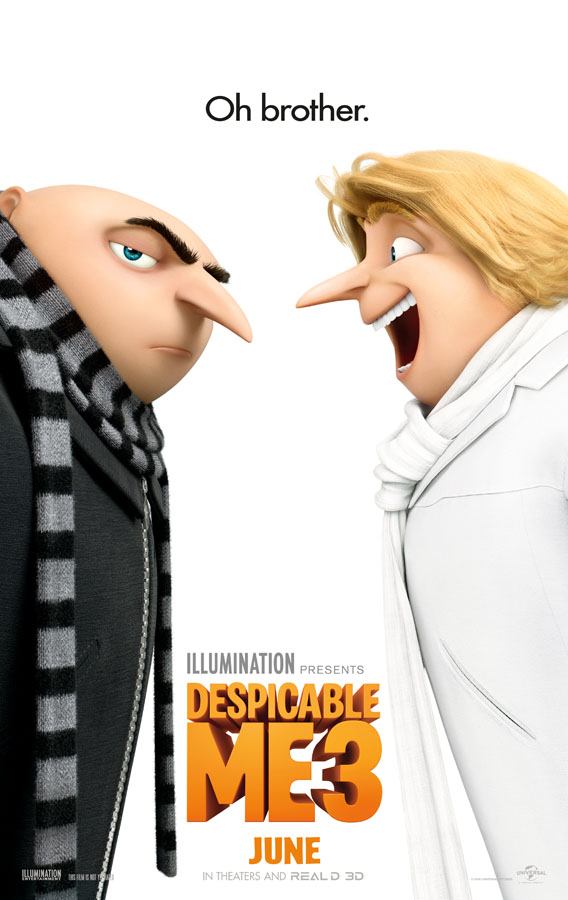 One of our favorite movie series is coming out with another movie, on June 30, that I know is going to be as amazing as its predecessors. Gru now has a brother Dru – and they are both voiced by Steve Carell. I am excited to see Gru and Lucy married and their adventures with their daughters Margo, Edith and Agnes.  My kids can’t stop watching the trailer!

Check out the New trailer for DESPICABLE ME 3:


Illumination, who brought audiences Despicable Me and the biggest animated hits of 2013 and 2015, Despicable Me 2 and Minions, continues the adventures of Gru, Lucy, their adorable daughters—Margo, Edith and Agnes—and the Minions in Despicable Me 3.  Directed by Pierre Coffin and Kyle Balda, co-directed by Eric Guillon and written by Cinco Paul & Ken Daurio, the animated film is produced by Illumination’s Chris Meledandri and Janet Healy, and executive produced by Chris Renaud.

Joining Steve Carell and Kristen Wiig in Despicable Me 3 is Emmy, Tony and Grammy Award winner Trey Parker, co-creator of Comedy Central’s global phenomenon South Park and the Broadway smash The Book of Mormon.  Parker voices the role of villain Balthazar Bratt, a former child star who’s grown up to become obsessed with the character he played in the ‘80s, and proves to be Gru’s most formidable nemesis to date.

This summer, villainy runs in the family. Steve Carell is Gru and Dru.

DESPICABLE ME 3 is in theaters June 30

Beauty and the Beast experience at Williams Sonoma #BeOurGuestEvent
Next Post: NEW Guardians of the Galaxy 2 trailer #GotGVol2