You are here: Home / Entertainment / The Emoji Movie Pumpkin Stencils and Coloring Pages 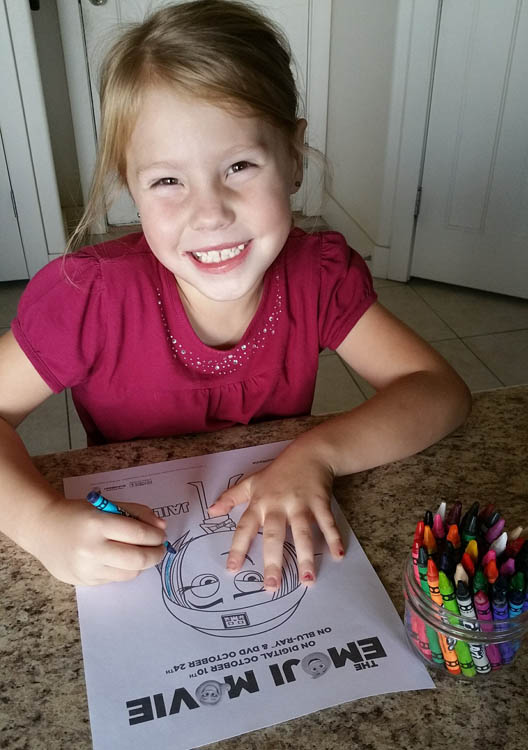 We received a review copy of the movie. All opinions are my own. We just got to watch The Emoji Movie for the first time as a family and I have to say, I was surprised by how much I really liked it. The movie is packed with a great storyline, humor and a lot of great lessons for kids to learn. If you haven’t seen it yet, you can buy it now on digital and DVD, Blu-ray. My kids love emoji’s and are familiar with many of them I haven’t even taken the time to use. Gene and Jailbreak along with Hi-5 work together to help Gene understand that showing his true self is what is important and being yourself is ok.

We are excited to share these fun Emoji Movie Pumpkin Stencils and Coloring Pages with you. CLICK HERE TO DOWNLOAD/PRINT all of them. 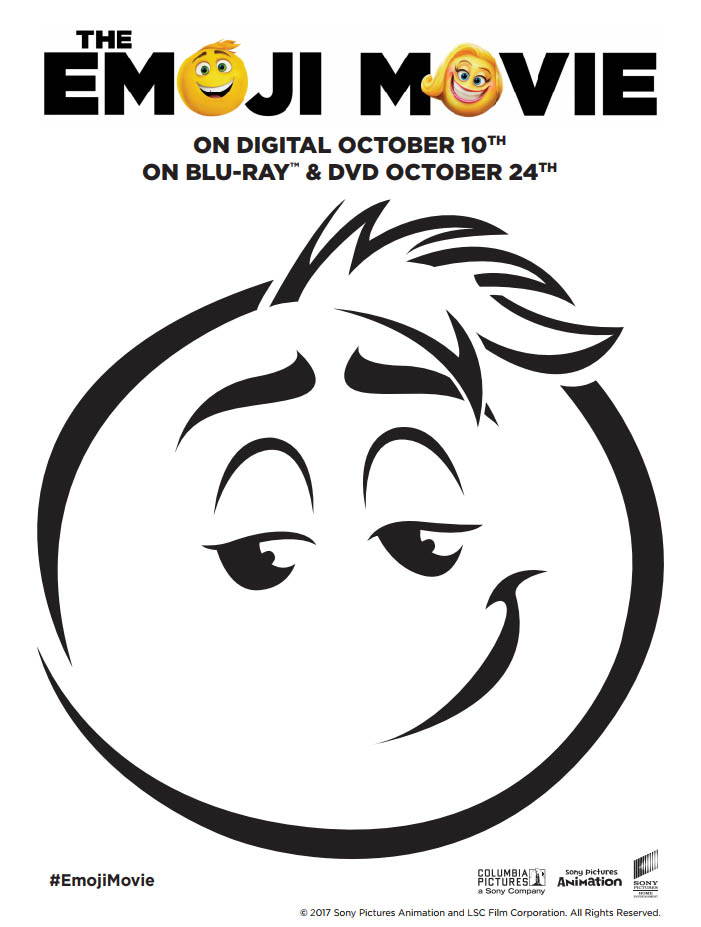 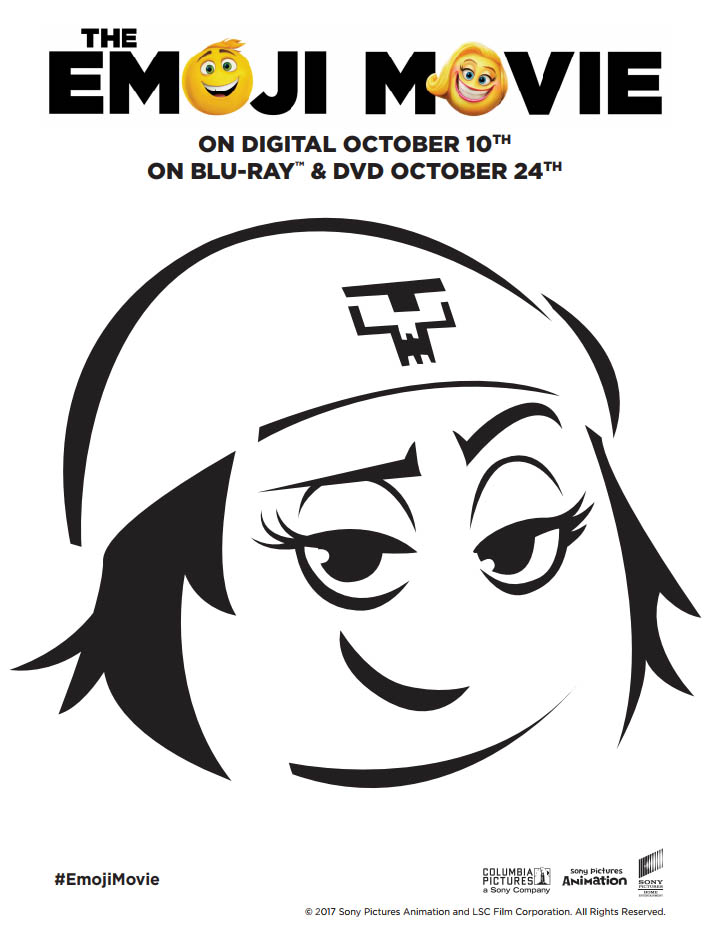 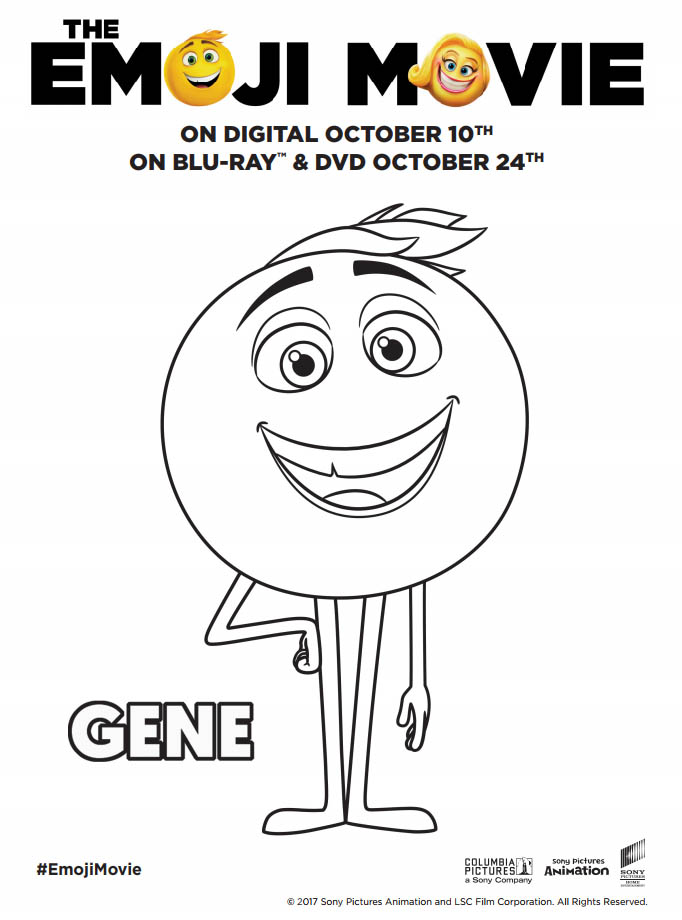 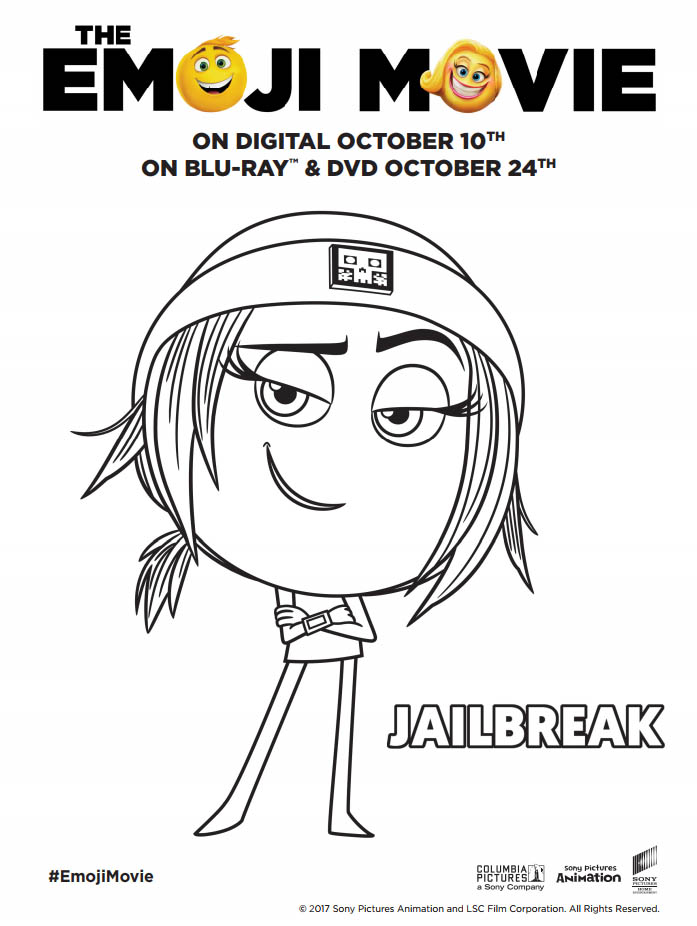 Be the movie night hero and bring home the film that kids give two thumbs up to for the ultimate kid’s movie night! It’s time to express yourself when Sony Pictures Animation’s THE EMOJI MOVIE arrives for the first time on Digital on October 10 and on 4K Ultra HD+ Blu-ray + Digital, Blu-ray + Digital and DVD October 24 from Sony Pictures Home Entertainment. The animated comedy unlocks the never-before-seen secret world inside your smartphone. Hidden within the messaging app is Textopolis, a bustling city where all your favorite emojis live, hoping to be selected by the phone’s user. In this world, each emoji has only one facial expression – except for Gene (T.J. Miller), an exuberant emoji who was born without a filter and is bursting with multiple expressions. Determined to become “normal” like the other emojis, Gene enlists the help of his handy best friend Hi-5 (James Corden) and the notorious code breaker emoji Jailbreak (Anna Faris). Together, they embark on an epic “app-venture” through the apps on the phone, each its own wild and fun world, to find the code that will fix Gene. But when a greater danger threatens the phone, the fate of all emojis depends on these three unlikely friends who must save their world before it’s deleted forever.

THE EMOJI MOVIE features an all-star voice cast including T.J. Miller (How To Train Your Dragon) as Gene Meh, James Corden (“Late Late Show with James Corden”) as Hi-5, Anna Faris (Cloudy with a Chance of Meatballs) as Jailbreak, Maya Rudolph (Big Hero 6) as Smiler, Steven Wright (Louie) as Mel Meh, Jennifer Coolidge (American Pie, Legally Blonde) as Mary Meh, Jake T. Austin (“Wizards of Waverly Place”) as phone owner Alex, Grammy® Award Winner Christina Aguilera as Akiko Glitter, Emmy® Award Nominee Sofia Vergara (The Smurfs) as Flamenca, Rachael Ray (“Rachael Ray”) as Spam, Emmy® Award Winner Sean Hayes (“Will & Grace”) as “Devil” Steven, and Emmy® Award Nominee Sir Patrick Stewart (X-Men, Star Trek: The Next Generation) as Poop. THE EMOJI MOVIE is filled with interactive bonus materials on the Blu-ray, 4K Ultra HD, DVD and digital releases that are fun for the entire family to enjoy including the “Good Vibrations” Dance Along and Lyric Video, where you can join along in the dance party. Learn about the amazing dance moves from the film’s celebrity choreographer in “Choreographing Emoji with Matt Steffanina.” Get creative with step-by-step tutorials on how to draw your favorite Emoji’s with two “how to” videos. Go behind-the-scenes of a real-life coding school with the “Girls Who Code” featurette, and get to know everything about the all-star cast in “Express Yourself: Meet the Cast.” Fans will also get to unveil more of the story behind their beloved character in “Jailbreak Decoded: The Untold Story.” Additional featurettes include “Creating the World Inside Your Phone,”“Bringing Emoji’s to Life,” and the very exciting “Puppy! An Original Hotel Transylvania Short.”In addition to extra content above, exclusive to Blu-ray, fans of all ages will be able to give it their best shot at the “Gimme a Hand! Guess the Emoji Game,” where Hi-5 and Smiler give you clues to help you guess the mystery Emojis. You will also have the chance to get creative with your Halloween Trick-Or-Treat candy with “Sweet App-etite: Make Your Own Candy Crush Inspired Saga Cake.”

RELATED  GIVEAWAY: 4 Tickets to Disney on Ice Presents Rockin' Ever After on March 5 (ends 2/18)

DVD and Digital Bonus Materials Include:

Blu-ray Exclusive Bonus Materials Include:
Everything listed above, plus:

THE EMOJI MOVIE has a run time of approximately 91 minutes and is rated PG: for Rude Humor.