Disney Descendants is a movie that has been watched in my house more times than I can count. My kids love the songs, storyline and overall theme of the movie. When they found out that Disney was making a Descendants 2, they were so excited. We watched the movie on Disney Channel when it premiered, but they loved it so much that they wanted to watch it more than just once, so when our review copy of Disney Descendants 2 came, my ears were ringing a bit from the screaming because they were so excited. Britney said “She loves the differences in the characters in this movie from the last. The new songs are awesome”. Brooklyn said, “I love the new characters and the storyline”. Overall the movie was really good. We enjoyed watching it and it is one my kids are going to enjoy over and over. 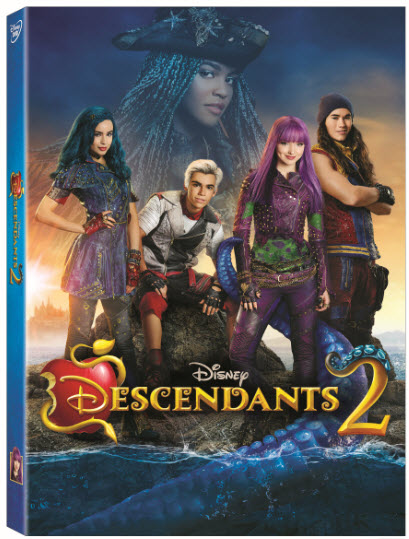 In Descendants 2 the villain kids are back and the stakes are even higher in the highly anticipated sequel to the Disney Channel Original Movie “Descendants”! The story deepens in the music-driven sequel to the global smash hit “Descendants,” as the teenage sons and daughters of Disney’s most infamous villains try to find their place in idyllic Auradon.

When the pressure to be royally perfect becomes too much for Mal, she returns to her rotten roots on the Isle of the Lost where her archenemy Uma, the daughter of Ursula, has taken her spot as self-proclaimed queen of the run-down town.  Uma, still resentful over not being selected by Ben to go to Auradon Prep with the other Villain Kids, stirs her pirate gang including Captain Hook’s son Harry and Gaston’s son Gil, to break the barrier between the Isle of the Lost and Auradon, and unleash all the villains imprisoned on the Isle, once and for all.

Bring home all the mischief on DVD August 15th!

Also, from 8/15 – 9/30 you can visit DisneyMovieRewards.com and enter to win a Disney Channel 5-movie collection including “Descendants” and “Descendants 2”!

We are excited to be offering a giveaway for a copy of Disney’s Descendants 2. Giveaway will run from 8/23-8/30. Must be 18 or older to enter. Open to US only.  Winner will have 24 hours to respond to the winning email or a new winner will be chosen. Good Luck!

Guardians of the Galaxy Vol. 2 is out! + exclusive behind the scenes clips #GotGVol2
Next Post: Marvel Studios’ THOR: RAGNAROK Superpower of STEM Challenge #ThorRagnarok