I love watching TV with my kids. We are always looking for a new series to watch together and I was excited to learn more about Disney Channels new show Andi Mack. “Life goes from routine to a roller-coaster ride overnight for artistic teenager Andi Mack. It all happens on the eve of her 13th birthday when free-spirited older sister Bex — who has been traveling around the world — returns home to make a revelation, which changes everything for the Mack family. Learning this family secret sends Andi on an uncharted course of self-discovery. She’s not alone on her journey, as best friends Cyrus and Buffy are also trying to figure out their places in the world.”

Here is a preview of Disney’s XD Andi Mack show

We screened the first two episodes of Andi Mack and then we sat down with Peyton Elizabeth Lee (“Andi Mack”), Lilian Bowden (“Bex”), Lauren Tom (“Cecilia”), Creator/Executive Producer Terri Minsky and Executive Producer Michelle Manning and learn more about the show, how it came to be and what it is like filming. This was interesting and really funny. It was great to get to know these ladies a little more and see them off set – they just as great as they are on screen.

Where did the idea for this series originate from?

Terri:  This is weird to say to a large group of people, but I read a profile of Jack Nicholson. He was raised with his mother as his sister and I thought, that’s an interesting idea just keep it in your file of ideas and then when somebody says to you, do you have any ideas, you go, yeah, I have Jack Nicholson. So that’s really where it originated from. I wish it was as cool as I know somebody who went through this, but you do, so that’s like one degree of separation. 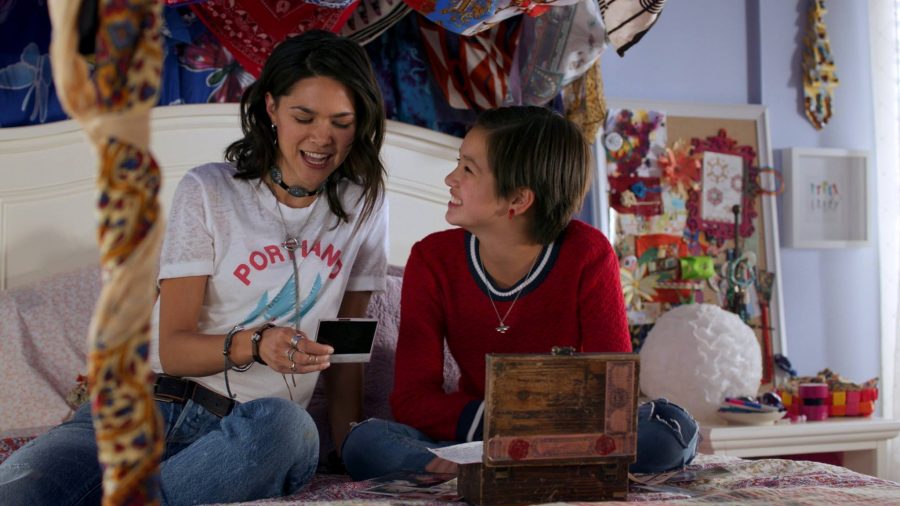 When each of you read the script, were you surprised by that reveal at the beginning?

Peyton:  Definitely. I think the first time I read it was before I even got the part, right? So you’re reading it and you’re like, this is so amazing. Already just going through the first episode and you think how she’s an amazing writer. But I hadn’t gotten the part yet, so you’re reading it and even the beginning, you’re already thinking it’s so amazing. The voice is so unique and different from everything that you usually see. But then when you get to the end of the first episode, I was like wait, what? Cause you’re just like reading through the script, and… wait, what? And so I had to read the last scene like five times before it really sort of sank in, you know? And then it just made it that more meaningful to me.

Lilian:  It was super surprising. So that reveal was in the sides that I auditioned with and they were the second pair of sides. And the first pair of sides is this super fun lighthearted scene that was closer to the beginning of the pilot. And I remember reading the sides and thinking, oh, my, gosh, this is so funny. This is really funny. This is great. Oh, this is great. You know, oh, this is a Disney show. This is great. And then that second scene when it takes that turn… that was the thing that cinched me, and I was like, I have to get this. It has to be me.

Lauren:  And for me, I really read it thinking this is something that’s got some meat on the bone for me. I have two kids that are 13 and 16 and so in order for me to pull myself away from wanting to be with them, cause that’s when they need you the most, in a way, I didn’t wanna be that mom, dinner’s ready, you know? I just thought that I would go a little brain dead, but Terri’s writing is just so phenomenal that I was like, yeah, I think I need to attach myself to this for so many reasons, just how innovative it is and the diversity and, and feeling like when I was growing up, I didn’t have a lot of role models. I’m so old that I was watching Harriet whatever that show was where I never felt like I could be those perfect white kids that I was looking at because they just didn’t have anything to do with my reality whatsoever. Whereas this show is so much more real and reflective of what’s going on in the world today. And then also just having so many people of color on it.

RELATED  I was the voice of Dipper in Planes: Fire and Rescue {Recording Booth Session at Disney Toon Studios} #FireAndRescueEvent

Obviously, the age of 12 and 13 is a tough time across the board. Is there a message that you’re trying to get across particular to that age group through this show?

Terri:  Honestly, my message is watch TV with your parents. I have a daughter who’s 22 and a lot of our conversations were generated by shows that we saw on television. You watch a Lifetime movie about bullying and ask ‘does that ever happen to you?’ I totally think that television is a great medium for parents and kids to start a conversation. And that was my goal. It wasn’t so much of a message to the kids. It was more like, I hope this is good enough for mothers and daughters or children and parents. Generations of a family to watch together.

Peyton, on the show, your character’s very crafty. Did you bring any of that to it or was that written?

Peyton:  Growing up, I always loved to do drawing and arts and crafts and stuff. But I think Andi’s definitely more talented than I am. She has a ton of patience for that little stuff that I don’t have. But it’s really fun for me to see all of it. And I think definitely you [pointing to Lilan] were incredibly crafty as a little kid. So, she still is.

Lauren: [talking about Lilian] She made portraits of all of us for Christmas, out —

Peyton: Made out of tape. And they looked like us, actually.

Lilian: Inspired by the character of Andi. Andi’s shack which has all those arts and crafts. The first time we got to go into it, I was like ooooo!!

Peyton: She goes insane. She’s like, can I be in this scene?

Lilian:  Or as the series goes on, I was trying to find different ways to always have a little busy work that was a craft, you know?

Michelle:  But don’t let Terri fool you. She is incredibly crafty.

Terri:  I never write more than five feet from my own life. So… 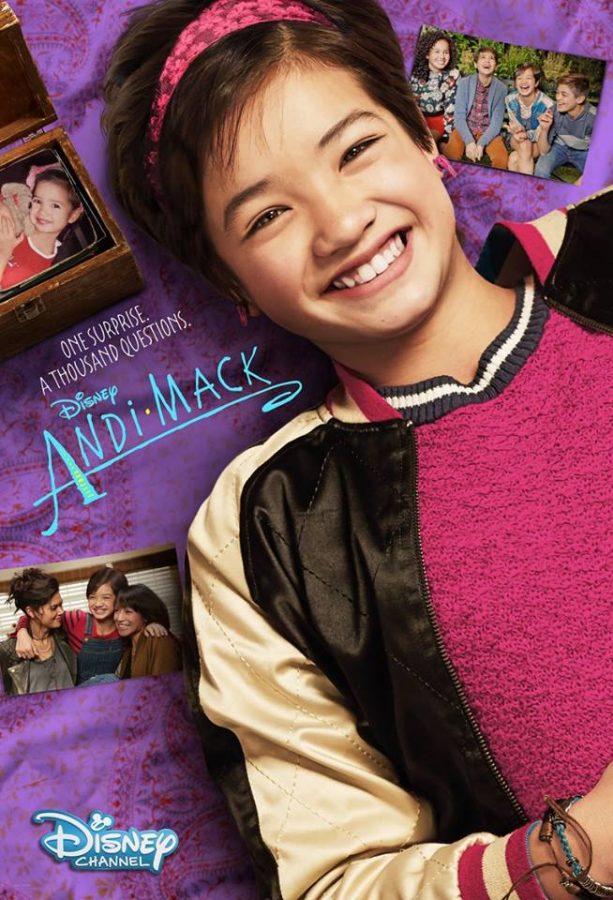 Seeing that you’re the same age as the character that you play,  are you getting to give some input the script?

Peyton:  Yeah, I definitely think when I read the script I close my eyes and I picture it when we get onto the set, what it’s gonna look like. And so when we get onto the set and we’re blocking it, a lot of the time I’ll be like, this doesn’t feel natural. Maybe if we did this or that line sounds kinda weird and especially when Terri’s on set, she’s so open to any changes. I can always go up to her and be like, this sounds weird. Could it be this? And all the time she’s really open to those opinions. And so that has been extremely helpful because a lot of the time you get a script and you’re like, wait, this doesn’t work for me, you know? It’s not true to what I would do, and she’ll adjust that. She’s so open to those opinions that makes the show so much more authentic and raw.

Terri:   And I also try to take from the actors themselves. I mean pretty much everything that Cyrus does, he actually did.

Terri:  He actually couldn’t straighten out that motorcycle. He actually couldn’t get the helmet off. I mean he’s adorable and just uniquely uncoordinated. I just try to do that with all of them. As soon as we cast Peyton, I was just making a mental note of how she talks and frankly, some of our best lines have been improved by Lilan who’s from UCB, so it’s like a bonus.

Peyton: Lilan is so easy to work with because she’s always giving you something. Every time you take a scene she’s giving you something new. So every time it’s different. You know, you’re not working with yourself. You’re working off the other person. And so Lilan’s definitely really easy to do that with.

Peyton: We built this world all together and so that’s what’s really exciting about it is we started from words on a page. But we definitely built up with it and we’re just working off of each other building to the top. And so I couldn’t have done it without any of you guys.

Watching these ladies interact together during the interview gave you such a good idea of how well they got along together and respected each other. That shows through in the show as well. I hope you take the time to watch this show with your kids. It really is a great show with an incredible message that your 12 and 13-year-old kids will love. ANDI MACK premieres tonight at 8:30/7:30c on Disney Channel. Learn more about it on the website or on Facebook.