While I was in LA for the Planes: Fire and Rescue Event we were able to go to DisneyToon Studios and meet with many of the amazing people behind the scenes of the movie. We were able to interview Bobs Gannaway (Director) and Ferrell Barron (Producer), Art Hernandez (head of story) & Lawrence Gong (story artist), Paul Gerard (director, creative development) & Jeff Howard (co-writer), Jason Henkel (casting director) & Paul McGrath (sound engineer), and Toby Wilson (art director).

Today I get to tell you about our interview with Toby and take you on a tour of Piston Peak National Park (where most Planes: Fire and Rescue took place). He starts off by telling us that he gets to design all of the visuals. This is a pretty big  job. He gets to direct and design the characters, the world of Fire and Rescue, lighting, effects and all of that.

Yosemite and Yellowstone were the two parks the film was based on. They used Yosemite Valley as the main design, but they also had Gasket Geyser (based on Old Faithful), and that is pulling in from Yellowstone. They have Arches (whoo, this is close to where I grew up) in there as well, and a couple of other places.

They made really cool 1920’s vintage designs to make posters to get some design ideas. It helped them figure out what attractions they wanted in the park – like Gasket Geyser (blows a gasket every hour on the hour) lol, the moonlight tours, the Piston Peak Railroad (Railway). Augerin Canyon with the Arches, and many more. 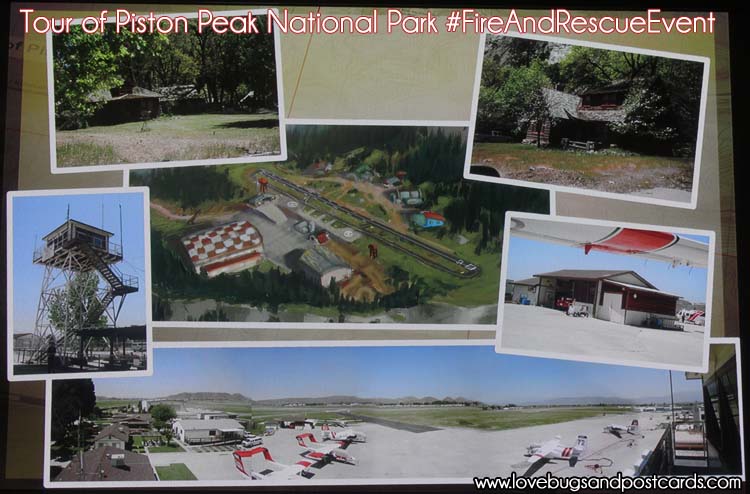 He told us that there are 2.5 million pine trees in the park. Each tree is individually designed because the planes have to fly over them and they each catch on fire. The park is two miles wide. If you drive it is 16 miles from the Northern tip to the Southern tip, and if you fly it is 10 miles from North to South (as the crow flies) so 16 square miles of just the park. The National Forrest Wildlife Reserve (where the Sequoya’s were when Dusty was flying into the park). And adjacent to the park is the air attack basin. 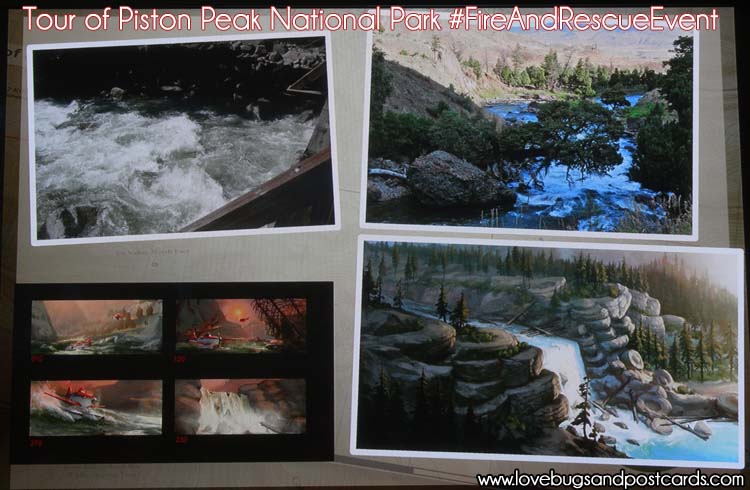 All of the foliage is indigenous to the pacific northwest.  Mansinitas, buckthorns, Ponderosa’s, etc. He wanted to share with us some fun facts about the movie that helped make it a “Vehicle Motif” for the Planes world.

Looking at the Park Map here is a little overview of what everything is:

When they first started the film, John Lasseter told Bobs Gannoway to make it a park for all vehicles. The Grand Fusel Lodge is a vehicle epicenter. Its a working airport, its a train depot, and all roads flow into it and through it. They wanted it to give you a sense of awe just like you would when you go into the Old Faithful Lodge. There are many extras like the spring loaded garage doors on the rooms, and the double yellow lines on the floor.

Ol’ Jammer is a ranger. The luggage rack tarp to mimic a ranger hat. The window frames look like old steel glasses, and him and Teddy (the Secretary of Interior) both have car grills that are made to look like a mustache.

They take a vehicle aspect and try to give it some character.

On Harvey’s spare tire cover – they have been to every state in the country except Oklahoma. The reason for this is because Bobs Gannoway (the director) is from Oklahoma. Pulaski was made after the cool yellow fire engine they saw at Yellowstone. There is a E-64 on Pulaski – that is a tilt of the hat to Redondo Beach Fire Department since they were such a big help in the research.

There was so much that we learned about how they design it and the stages of how it works. There are a lot of details (like pine needles that gather on the window seals). If you haven’t seen it yet – you are missing out. Take your family out this weekend. Here is a preview to whet your appetite:

I lost something this week, and I hope I never find it again #Noom30
Next Post: Walt Disney Animation Studios Unleashes BIG HERO 6 Lineup #BigHero6