We love PEANUTS! They are so fun to watch and everyone can relate to at least one of the characters. We recently got the PEANUTS Charlie Brown’s All Stars! 50th Anniversary Deluxe Edition and we have had a lot of fun watching it. My kids love sports so they were glued to this. We also enjoyed the fun extra/bonuses on the DVD as well. Charlie Brown, Linus, Snoopy and Lucy are just a few of the characters that we know and love and this show is one that we love to watch over and over because it is so funny and we can all relate to part of it. I can’t believe that is it 50 years old! I grew up with this (even thought it came out way before I was born) and I am sure that many of you did as well. I want my kids to grew up with PEANUTS as well and this is a fun way to bond as a family with a fun movie night. 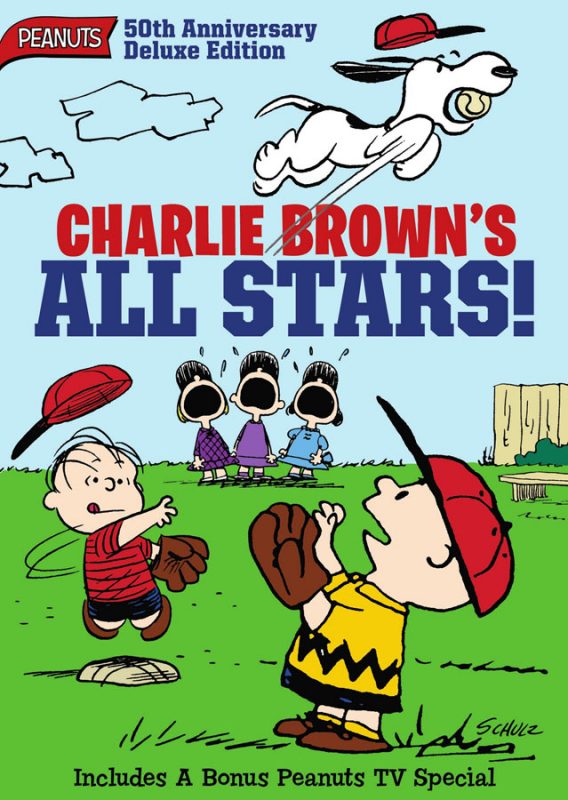 It’s the golden anniversary of Charlie Brown’s All Stars, the beloved Peanuts television special, which earned two Primetime Emmy® Award nominations. To mark the occasion, Warner Bros. Home Entertainment (WBHE) released this delightful story in a deluxe, 50th anniversary edition, completely remastered in beautiful high definition on October 4, 2016. Charlie Brown’s All Stars follows the bittersweet story of Charlie Brown, who won’t give up on trying to bring his baseball team to victory, in spite of facing great criticism from the team’s players.

In Charlie Brown’s All Stars, it’s summer and baseball season gets underway. Charlie Brown is put in charge of managing the Peanuts’ baseball team again, which in the past, has only suffered crushing defeat from its opponents. The disillusioned players blame Charlie Brown for the team’s past poor performance. When a sponsor offers Charlie Brown real baseball uniforms and a chance to be part of an actual league, he is thrilled. He believes the new uniforms and acceptance into a real league will motivate his players. His excitement however, soon turns into disappointment when he learns that if he accepts the offer, Snoopy, Lucy, Patty, Violet and Frieda will be kicked off the team because the league’s policy prevents girls and dogs from playing. Poor Charlie Brown, not only is he criticized by his teammates for being a bad manager, he’s now faced with a difficult moral dilemma. Should he accept the uniforms?

“Charlie Brown’s All Stars is a classic. Viewers of all ages will enjoy this endearing story,” said Mary Ellen Thomas, Vice President Family & Animation Marketing. She added, “We’re pleased to celebrate 50 years of this heartwarming special with this new release. For any Peanuts fan, this newly remastered edition is a must-have for their collection.”