We recently got the LEGO® NEXO Knights – Season 2: Book of Monsters DVD and my kids love it! It is a great collection of shows that are funny and entertaining. We love watching the Knights and other characters and then getting our LEGO’s out and building our own sets and playing them like they did in the show. Spark their imaginations and have some good laughs with the LEGO NEXO Knights series out on DVD 1/17/17.

FIGHT THE FORCES OF EVIL AS WARNER BROS. HOME ENTERTAINMENT AND THE LEGO GROUP RELEASES 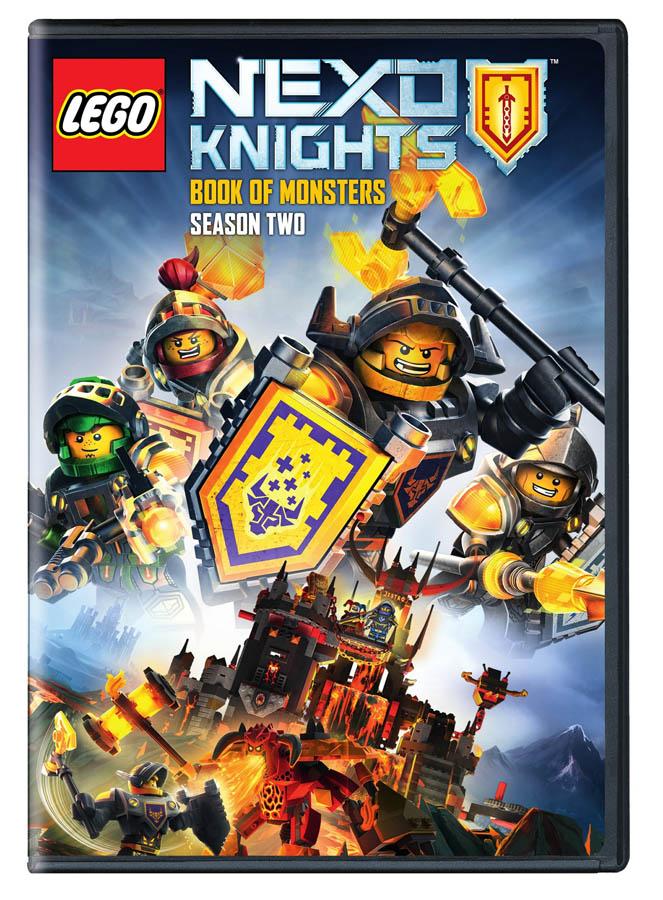 The NEXO Knights are back again to continue their fight against Jestro, the King’s Jester turned to the dark side, and the stolen Book of Monsters which is filled with the world’s most powerful spells! As the evil powers continue to grow, it is up to these seasoned pros to keep the villains at bay and the Kingdom of Knighton safe. But, Jestro and the Book are back with a vengeance and plan to do whatever it takes to conquer Knighton as Warner Bros. Home Entertainment and The LEGO Group release LEGO® NEXO Knights – Season 2: Book of Monsters. Available on January 17, 2017 for $19.98 SRP, LEGO® NEXO Knights – Season 2: Book of Monsters includes all 10 action-packed episodes as our heroes continue their journey to defeat the villains and their growing army of monsters.

To begin their lengthy quest to defeat Jestro and the Book of Monsters, the Knights must return to their old stomping grounds – the Knights Academy – to ensure that their NEXO powers and equipment are strong enough to keep up with the evil army. The second season is filled with a new set of hilarious adventures for the NEXO Knights, from a golden gala to a spicy chili cook off and to a crazy comic book convention. With experience under their belt, new gear at their disposal, enhanced powers, and Merlock the Magician guiding the charge, it is up to the NEXO Knights to protect Knighton and continue to search for the lost magical books. Will this be enough to defeat the army of monsters once and for all? The battles will be tougher, the monsters will be scarier and the stakes are higher as the threat to Knighton grows. Discover the fate of the Kingdom of Knighton in LEGO® NEXO Knights – Season 2: Book of Monsters.

“After seeing the huge popularity of the first season, we are excited to continue the Knights’ saga,” said Mary Ellen Thomas, Vice President Family and Animation Marketing, Warner Bros. Home Entertainment, “There has been such a positive response to the series from children and parents alike, we are thrilled to share the next hilarious chapter for these medieval knights in the LEGO world.”

RELATED  Scooby-Doo! And KISS: Rock and Roll Mystery on DVD and Blu-Ray

Get your copy of LEGO® NEXO Knights – Season 2: Book of Monsters

Here are other awesome NEXO Knights sets and DVD’s

About The LEGO Group

The LEGO Group is a privately held, family-owned company with headquarters in Billund, Denmark, and main offices in Enfield, USA, London, UK., Shanghai, China, and Singapore. Founded in 1932 by Ole Kirk Kristiansen, and based on the iconic LEGO® brick, it is one of the world’s leading manufacturers of play materials.

Guided by the company spirit: “Only the best is good enough”, the company is committed to the development of children and aims to inspire and develop the builders of tomorrow through creative play and learning. LEGO products are sold worldwide and can be virtually explored at www.LEGO.com.

For more news from the LEGO Group, information about our financial performance and responsibility engagement, please visit http://www.LEGO.com/aboutus.

LEGO, the LEGO logo, the Minifigure, DUPLO, LEGENDS OF CHIMA, NINJAGO, BIONICLE, MINDSTORMS and MIXELS are trademarks of the LEGO Group. ©2016 The LEGO Group.

RELATED  Ocean's 8 now available to own

Warner Bros. Home Entertainment (WBHE) brings together Warner Bros. Entertainment’s home video, digital distribution and interactive entertainment businesses in order to maximize current and next-generation distribution scenarios. An industry leader since its inception, WBHE oversees the global distribution of content through packaged goods (Blu-ray Disc™ and DVD) and digital media in the form of electronic sell-through and video-on-demand via cable, satellite, online and mobile channels, and is a significant developer and publisher for console and online video game titles worldwide. WBHE distributes its product through third party retail partners and licensees, as well as directly to consumers through WBShop.com and WB Ultra.

Should you give your children allowance?
Next Post: Pan Seared Halibut Recipe with Sautéed Green Beans