You are here: Home / Entertainment / Universal Pictures / The Huntsman: Winter’s War out today!

We received an advance copy of the movie. All opinions are our own.

I am a huge fan of the The Huntsman series. I loved the first on so I couldn’t wait to see the second one (which is actually a prequel and a sequel), and I have to tell you, I wasn’t disappointed. Charlize Theron continues her role as the evil Queen Ravenna. Emily Blunt plays Ravenna’s sister Freya. Another return is the Huntsman, Eric played by the yummy Chris Hemsworth. Sara played by Jessica Chastain also joins the movie. The Huntsman: Winters War is an intense movie filled with action, emotion and feeling. It has a great cast and the story is great. I was a little sad that they cut Snow White from this, but I am holding out hopes that she will return in the third one. This is one you will want to add to your collection! Pick it up today on Blu-Ray or DVD or get a digital copy. 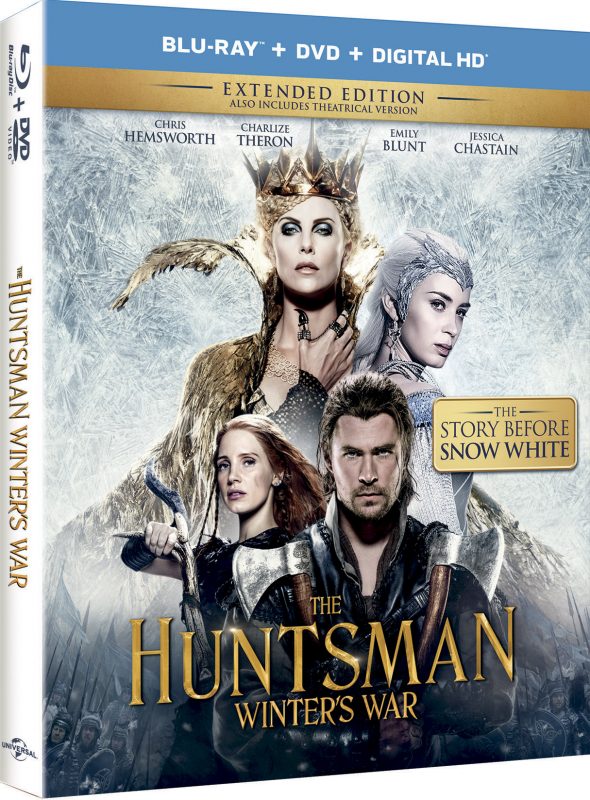 If it’s the Snow White tale you’re looking for, discover the story that came before in The Huntsman: Winter’s War, coming to Digital HD on August 2, 2016 and 4K Ultra HDTM, Blu-ray™, DVD and On Demand on August 23, 2016, from Universal Pictures Home Entertainment. The Huntsman: Winter’s War on Blu-ray™ and DVD includes an all-new extended edition of the epic action-adventure, plus exclusive bonus features that reveal the movie’s behind-the-scenes secrets.

The Huntsman: Winter’s War stars Charlize Theron (Mad Max: Fury Road, Monster) as the evil Queen Ravenna, who betrays her good sister Freya (Emily Blunt: Sicario, Edge of Tomorrow) with an unforgivable act, freezing Freya’s heart to love and unleashing in her an icy power she never knew she possessed. Retreating to a kingdom far to the north, Freya raises an army of Huntsmen as her protectors, with the only rule that no two of them should ever fall in love. As a war for domination escalates between the two queens, the hero standing between good and evil is Freya’s most elite Huntsman, Eric (Chris Hemsworth: Thor, Star Trek Into Darkness). Alongside fellow warrior Sara (Jessica Chastain: The Martian,The Help) — the only woman who has ever captured his heart — Eric must help Freya vanquish her sister or Ravenna’s wickedness will rule for eternity.

Here is the The Huntsman: Winter’s War trailer: