One of my favorite shows growing up was Hey Arnold!. I am so excited that the whole series came out on DVD recently. I was able to share Hey Arnold! The Complete Series with my kids and they loved it too. It is a fun and silly show that really bring back memories for me. Two of my kids are about the same age as those in this show and so they laugh and giggle and can really relate to the grade-school aged humor in them. It is a great set and a great price at Walmart! 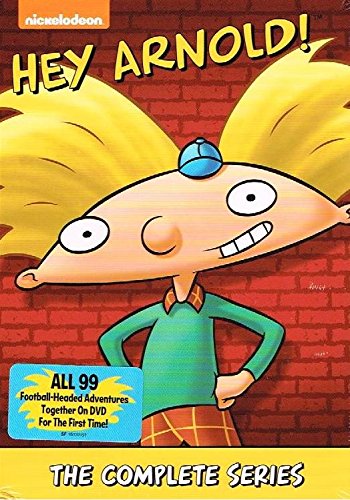 Your favorite football head and all his pals are here with enough fun and laughs to cover several city blocks!  On August 19th, 2014, Shout! Factory released Hey Arnold! The Complete Series, a 16-DVD box set featuring all 99 big-city adventures from the classic Nickelodeon animated series.

Life in the big city is one big adventure for Arnold. Living with his grandparents, who run the Sunset Arms boarding house, Arnold shares a roof with a diverse and unusual menagerie of characters (including his pet pig!). But as any fourth grader knows, some of the most memorable people you’ll ever meet are in school. With friends likeArnold’s (including storyteller Gerald, class jinx Eugene, sometime-bully Harold, and the tomboy Helga, who harbors a secret crush on our hero), you can be sure that he’s got some funny exploits to share with fans.

Hey Arnold! features an all-star voice cast, including Dan Castellaneta (The Simpsons), Francesca Smith (Recess),  Toran Caudell (Recess) and Jamil Walker Smith (SGU Stargate Universe). Created by Craig Bartlett as a comic in 1986, Hey Arnold! debuted as an animated short for the Nickelodeon film Harriet the Spy in 1996. Hey Arnold! went on to air on Nickelodeon from 1996 to 2001. The show also aired on “Nick on CBS” from 2002 until 2004. Whether you want to revisit your own childhood memories or create new ones with your kids, Shout! Factory has two words for you: Hey Arnold!

We received a copy to review. This did not affect our opinions and they are 100% our own. We only recommend products or services that we believe will be beneficial to our readers.