Another part of my amazing Disney trip to San Francisco (if you missed out on the other posts, you can catch up here) was being able to get behind the scenes of Inside Out. We were able to interview Pete Docter (Director) and Jonas Rivera (Producer) and learn some fun things about the movie as well as details about wither there is an Inside Out 2 in the works . Keep reading to get all the details. 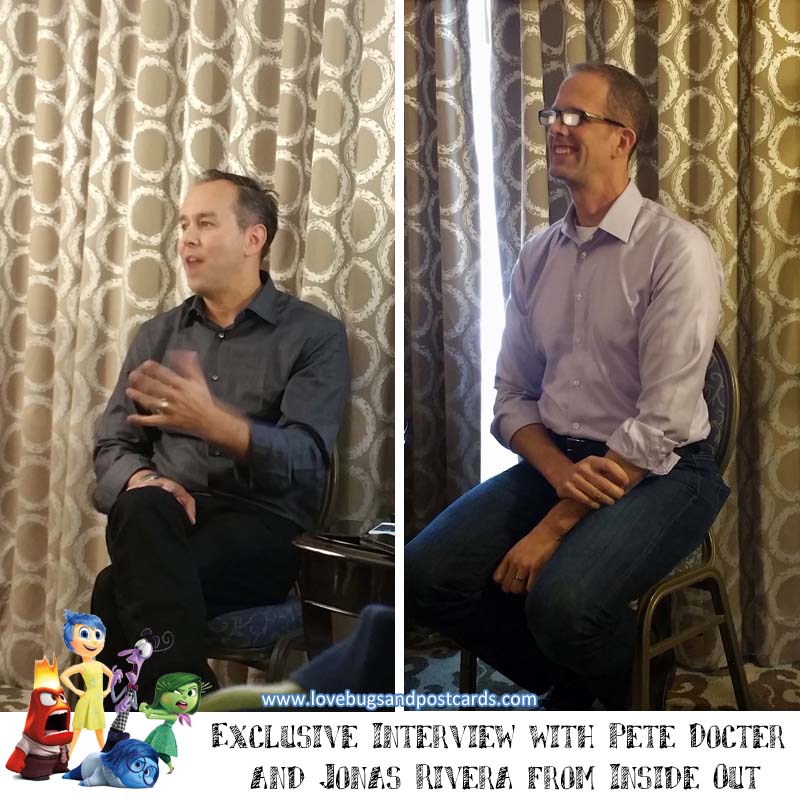 As you can imagine – sitting with the director and producer of Inside Out – we wanted to know first thing if there would be a sequel. Their answers were very vague, but I got the idea that they really don’t have one on the plate right now. Jonas and Pete talked about The Good Dinosaur, Finding Dory, and a few other films that are in development right now, as well as saying in the 20+ years that they have been there, there has never been more going on at Pixar. That is all amazing, and we are so excited to hear great things about Pixar, but we were still curious about a sequel. Pete said: “Our next project…We’re in very, very early development doing some research on some ideas”. Jonas added “I’ll tell you this, though, when Pete pitched Inside Out to me, just the very beginning of it, of just the very simple premise, I’ll never forget. I sat in my chair and I went, what?  And I did the same thing when he pitched this”. That lets us know that more great things will be coming from Pete and Jonas, and I don’t doubt that part of that will be a sequel to Inside Out. The movie is just to great with so many different places to go without have several more movies/ideas floating around. 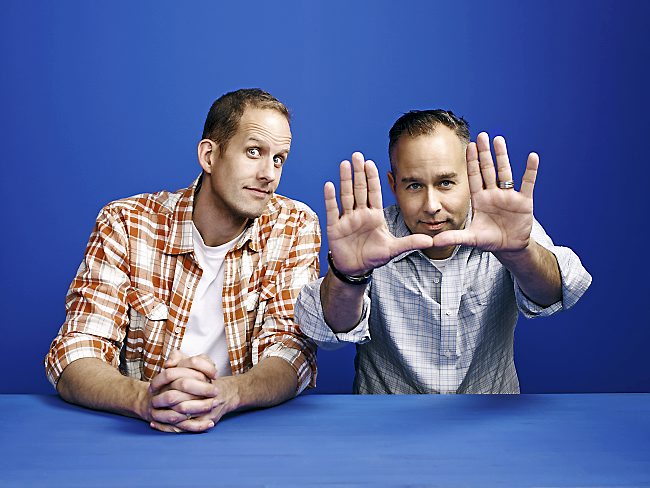 We wanted to know which characters they resonated with the most. Of course, they both agreed that it depended on the day (as I think we can all relate) but for the most part, they had ideas of who and why. Pete said that for him, most of the time, it was Joy, and once in a while Anger. Jonas also agreed that his was Joy most of the time. Jonas tells us about how they are both pretty positive people (which I could see just from being in this interview), and working at that working at Pixar is great, because it is a great place. Jonas adds “Every now and then I pinch myself like we have the greatest jobs in the world.  I never dreamed I’d be doing this and talking about movies that we get to make and also with joy, what I love about joy, and this is personal, Joy is someone that is always positive but she’s always looking backwards a little bit. She’s very much into her memories and I guess she’s a nostalgist and I’m a little bit that way, too.  And so really-she’s my favorite.” 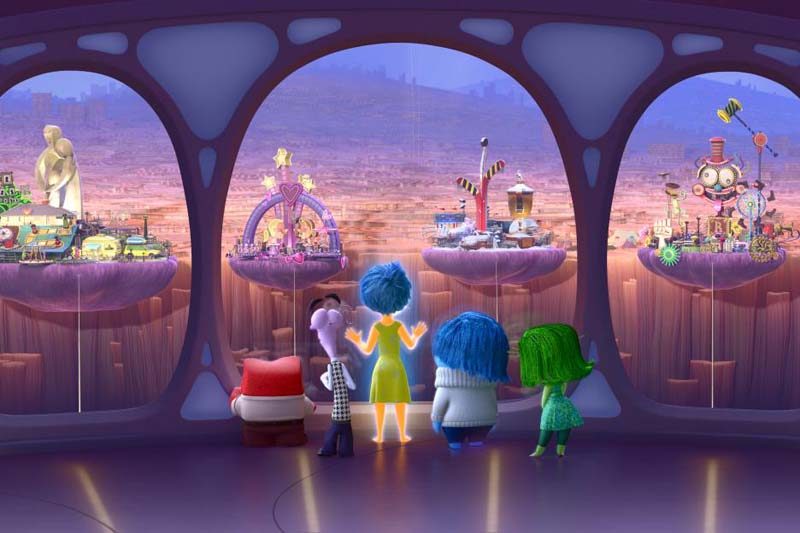 Next we wanted to know about the success of the film and what they thought about it. For those of you that don’t know, Inside Out literally broke records for how successful it is. The film’s box office numbers in its first three days made it the highest grossing original, non-sequel property opening ever. It is also number 3 in highest grossing films in 2015 – worldwide! If you haven’t seen it yet, get ready to buy it next week (I have no doubt that it will sell out quickly – you can pre-order it on Amazon just to be safe). Jonas told us “we always believed in it and I always loved it and thought it would be really fun.  But I never dreamed it would be received so warmly everywhere.  I mean, we’ve been around the world and we just got back from China and people like it there and its just been awesome.  Its been awesome.” Pete added “it’s a very universal idea and some of this came out of the research that we found, everyone around the world – even remote tribes that have no outside contact in Papa New Guinea, have the same emotions. Everybody has the same emotions.  So we were hoping that it’s a fairly universal idea”. 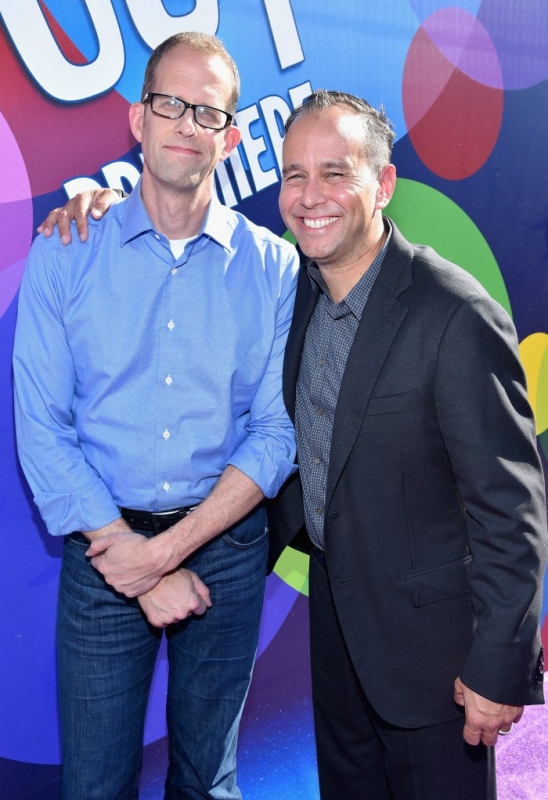 Another thing we were curious about was how they came up with the inside of the brain. If you haven’t seen the movie, you can watch the trailer below to get a better idea of what we are talking about – its not gory – but rather how the inside out our heads look and reflect our personalities as well. Pete told us how they started at something that was similar to a spaceship and moved on from that because they wanted something different – they moved from thing to thing and came up with “Headquarters”. After they had headquarters, they then extrapolated from there to places like long-term memory, dream production, etc. Other things like stream of consciousness, brainwashing and some other things didn’t make it into this movie. Jonas added “It was fun thinking about the geography of the mind and how we might make that little. We’re big fans of Disneyland and I remember even when we pitched to John Lassiter for the first time, above the monitor there’s a 1959 framed map of Disneyland that I have in our war room.  I couldn’t help but think it’s kind of like that, where there’s different regions in and there’s a train.” I personally feel like this was a kind of guide to the way they ended up with the final design. The central area, with spokes to different places and a train and other things as part of it. 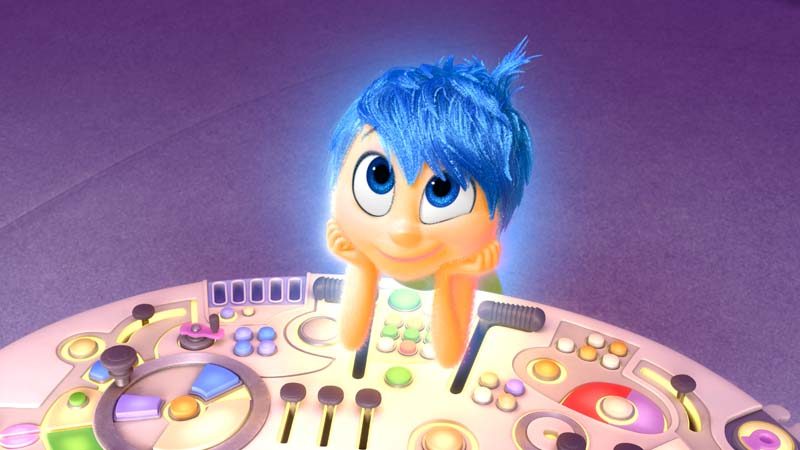 INSIDE OUT – Pictured: Joy. ©2015 Disney•Pixar. All Rights Reserved.

Another aspect of the film that was talked about was how this film has enabled so many people to be able to express their emotions better. Kids (especially those with special needs) are able to use the Inside Out Dolls (Anger, Joy, Fear, Sadness and Disgust) and be able to express themselves where there was no outlet before. Jonas also told us a story about his daughter Ava who uses her Inside Out socks to mix and match – like she has joy and fear on that day – and it is great that it helps kids think through their emotions like that. Jonas also added “It’s funny but it’s like wow, she’s thinking about that.  I never dreamed stuff like that would happen.  It’s really nice I guess its a cherry on top of the whole thing that it has done that.” 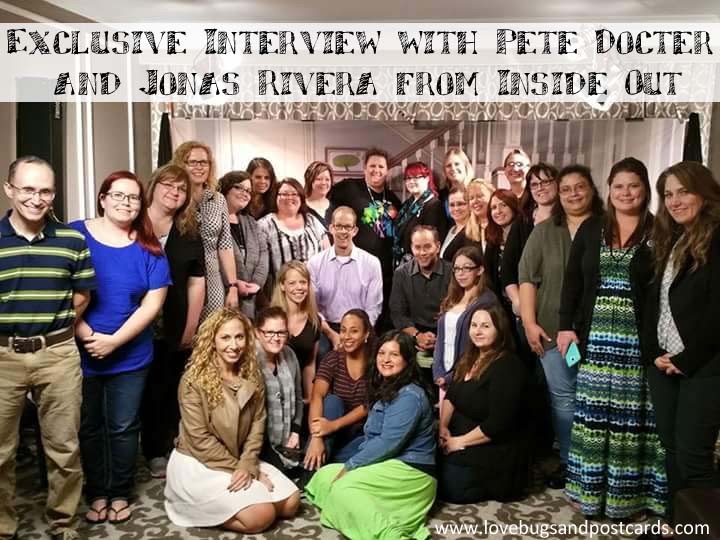 We also talked about how we feel Inside Out will make a great addition the the Theme Parks and about a few other things about the story. They are both amazing and talented and it was really an honor to be able to interview them about this film and learn more. Be sure to check out the trailer for Inside Out below and add it to your personal collection on November 3!