Today I get to share with you another great interview I was able to be a part of on my last trip out to San Francisco for The Good Dinosaur and Inside Out press junkets. We got to interview Kyle MacLachlan (voice of Riley’s dad) and Kaitlyn Dias (voice of Riley) from the movie Inside Out. If you haven’t seen the movie – then let me tell you IT CAME OUT TODAY! So you can go get it and watch it with your family tonight. They will love it. You will love it. And it will be something they want to watch over and over (so be sure to get the copy with the digital edition so you can load it to their tablet and not have the DVD playing all day – and yes I am speaking from personal experience). This interview was a lot of fun, and it was great to learn so much about these two great voices behind the movie. 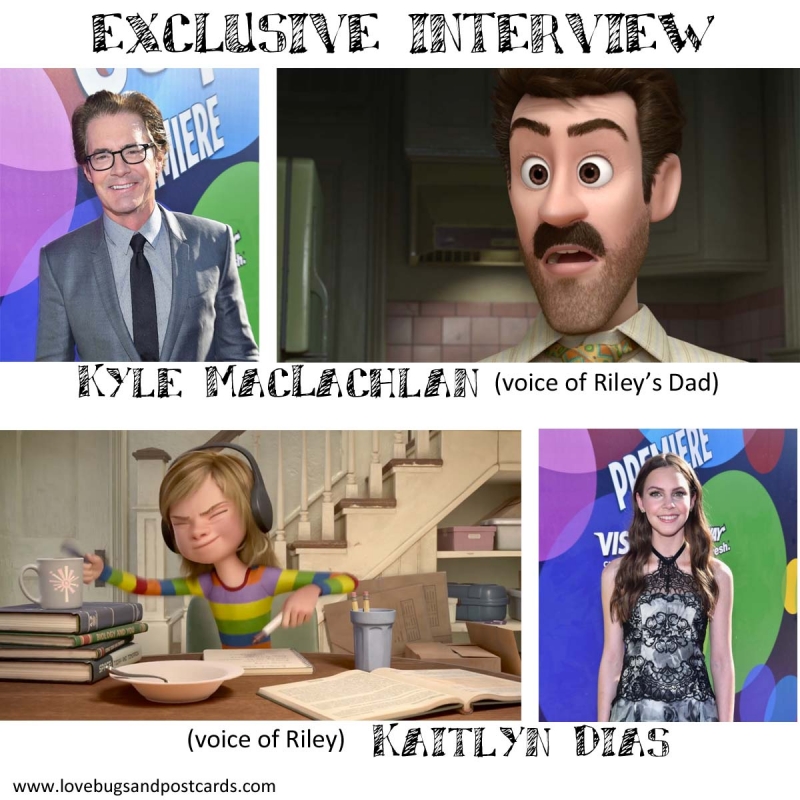 At the beginning of the interview we wanted to know more about Kyle and his son’s experience seeing the movie. I don’t know if you have seen it and if you saw it with kids, but it is almost like a whole new movie when you have kids. They feel things so differently and it really affects them in different ways, and I loved their reactions, and how they still react to the movie. Kyle’s son is 7, and so I can really relate since I have 6 and 9 year olds. This is what he told us about his son’s reaction to the movie. “[Kalum] had a lot of questions.  He just wanted to know what happened and why it happened, and he was just asking me all about the world and asking me about why I had a mustache (this was very funny) and that were in my head and what that meant.  He got the story which I think was a good sign. Obviously the movie has some complexity to it, but the fact that he was with it the whole way and asking the right questions, said to me, this movie is really for everyone.” I couldn’t agree with him more. The movie has levels where everyone can relate to. From little kids to adults – there are emotions we relate to. 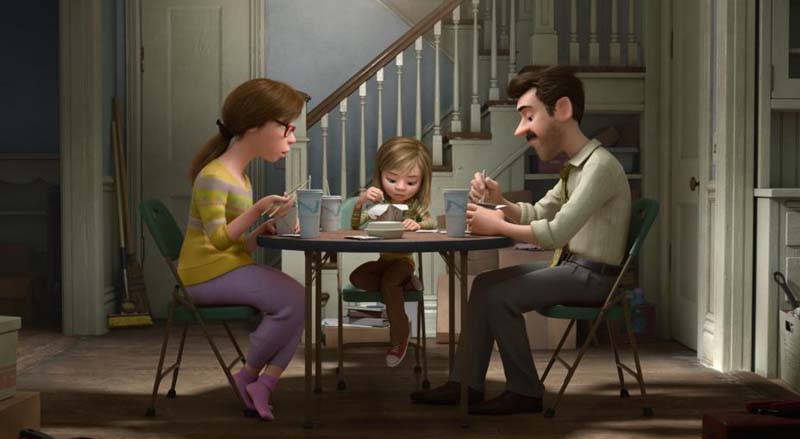 Kaitlyn told us how she was brought on as a scratch voice for the movie (basically someone who does the voices until they cast them), and over the course of things they ended up picking her up as the voice of Riley. This was her reaction “How amazing was it to stay on for the full feature film and now for the short after being one of those initial scratch voices? It really blew my mind.  I was 11 at the time and I’m just like I’m gonna be a part of a Disney film.  At first I was like no one’s gonna see me, but still it’s gonna be cool.  And then when I got the news that I was gonna be on the full feature film, I was like whoaaaa.” I can’t even imagine what she was feeling. I have an 11 year old girl and I know how off the wall she would be about something like this and what her emotions would be like. What an amazing and fun opportunity. 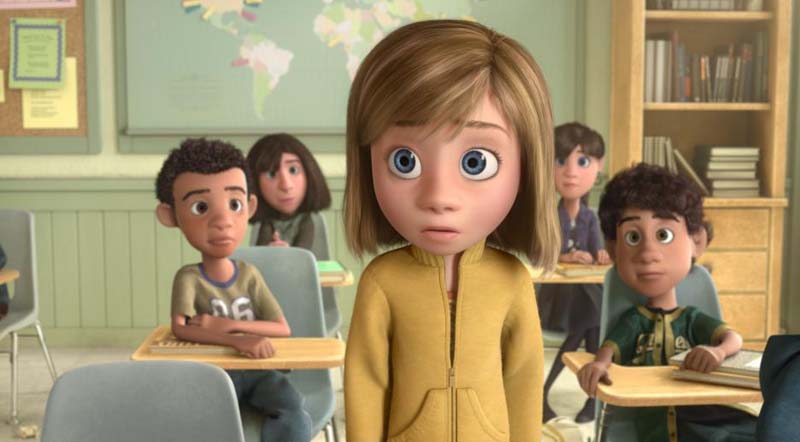 They talked about working on the film, about voice acting, their thoughts and feelings on a few different things but I really loved when they told us about what their favorite emotions from the film are. Kaitlyn tells us that she is “gonna have to go with Anger, ’cause he has hilarious facial expressions. Plus the fact that he explodes and you make s’mores off of him.” This made me laugh. My kids would love that too! Kyle chimes in and adds “Or you can use him as a blow torch.” which they actually did in the movie so that is hilarious. Kyle tells us that his favorite emotion from the film is “Joy.  I tend to be in joy mode most of the time. The way she would manipulate sadness in the beginning and sort of try to pull the wool over her eyes.  That’s kind of what I do.” At this point he laughs and it really makes me laugh too! How funny to see this side of him. He continues “So Joy for me was the one I identified with most.” 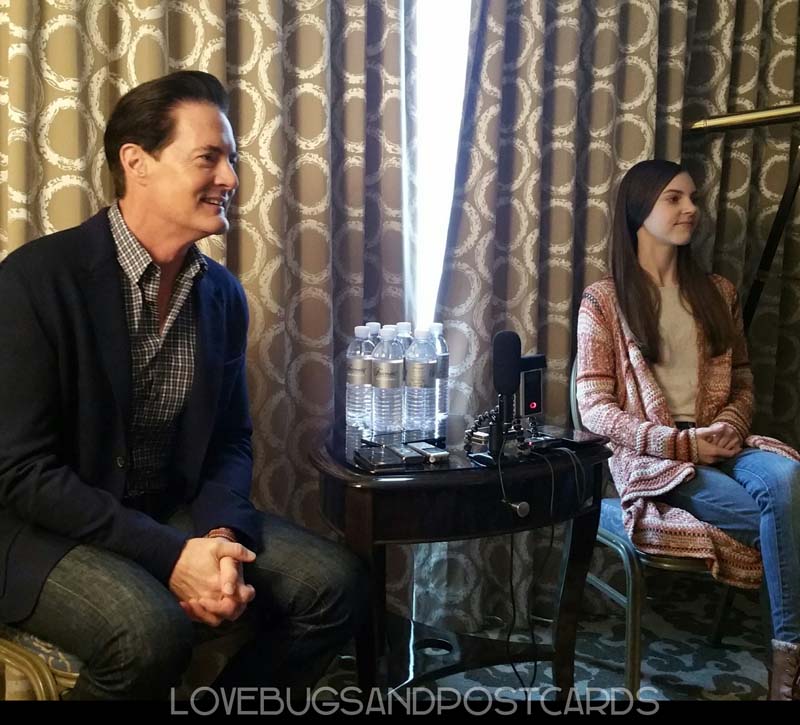 We  noticed that the voices they did in the film were a little different then their talking voices so we wanted to know how they changed their voices and found the one they used. Kaitlyn tells us a fun story that I have to share with you. She starts by telling us “I was working on it for four years.  So, of course, my voice changed a little bit.  Over time I had to actually make my voice a little bit higher to make it sound younger, because I’m 16 now and Riley’s 11.  So, it’s a bit of a time difference.” This made us all laugh.

Kyle got into her story as well and asks “But did you start so the 11-year-old was pretty much your own voice and you had to kinda match that then?”

Kaitlyn answered “Yes, it was.  I just had to keep my voice consistent over time.”

Kyle replied to her “That’s a long time.  I didn’t know it was that long.  That’s good.  I came in late in the game, and my voice changed, too. You seen the Peyton Manning commercial?  The high voice Peyton Manning?  That was me.  No.” This was so funny we were all laughing at this. He brought his voice up high and really got into it. Because he said he got into the movie “late in the game” we wanted to know how long he did work on it. He told us that is was about a year and a half. 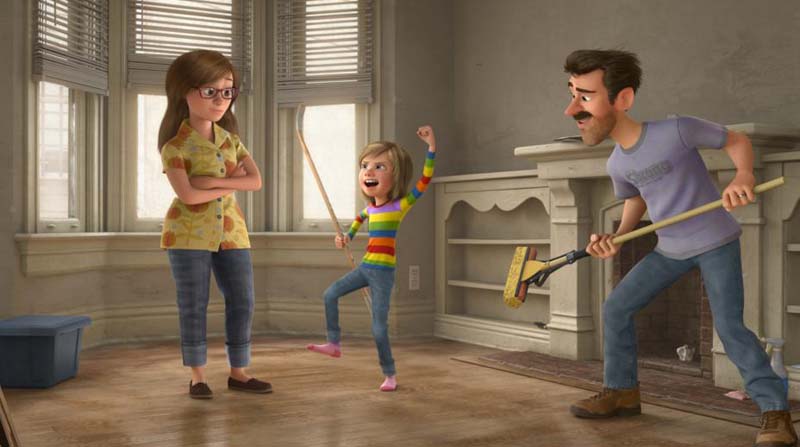 There was a lot of fun banter back and forth between them and many great questions asked, but to finish it off we wanted to know if Kaitlyn was able to go to school while she was making the film or if she had to be homeschooled. She told us “I was able to continue going to regular school.  It was just little one day visits down to Emeryville and just like every month or so. So, it was sporadic enough that I could keep going to normal school.” I am sure that as her friends learned what she was doing, they couldn’t wait for the movie to come out. 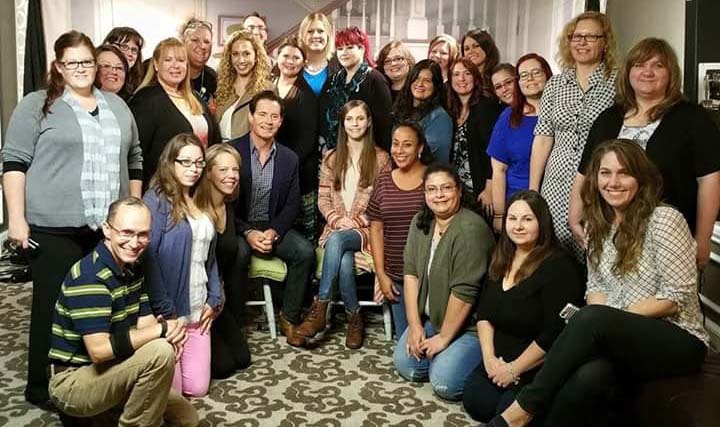 Remember that Inside Out came out today (Nov. 3) on Blu-Ray and DVD! Be sure to head out and get your copy for a fun family night!