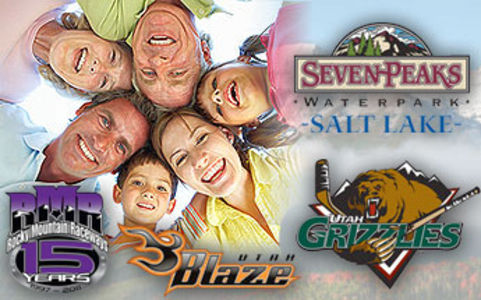 Right now on City Deals you can get a Utah Pass of All Passes (new or renewal) for only $29 – AND you get a FREE $20 Food Voucher! That is like paying only $9 for each pass! These passes are amazing and they make for a whole summer of fun for very cheap. Children 3 and older need a pass for most events. We were able to get a Tadpole pass for free from the Seven Peaks office for our two under three last year. This gave them admission to the events, but because they were so small, they don’t charge for the pass.

NEW VENUE: Hollywood Connections is now part of the pass of all passes!!! Unlimited admission to rides, skating, and mini golf during Monday-Thursday. My kids are SO excited about this!!!!

Buy or Renew Your Utah Pass of All Passes
– Includes 12 months of Family Fun
– Includes a $20 food voucher for each pass you buy
– $20 gift card will be mailed to you by Seven Peaks when you redeem your Pass of All Passes online
– May only be redeemed online at www.sevenpeaks.com/redemption
– May take up to 6-8 weeks to arrive from the date you submit online
– Price includes sales tax
– Purchase any quantity