You are here: Home / Entertainment / Need for Speed Movie in Theaters TODAY! #nfsmovie

Need for Speed came out today! The Need for Speed Movie is amazing. The action, the story line and the cinematography all come together to bring you a fast paced, intense and emotional movie you will want to watch over and over! 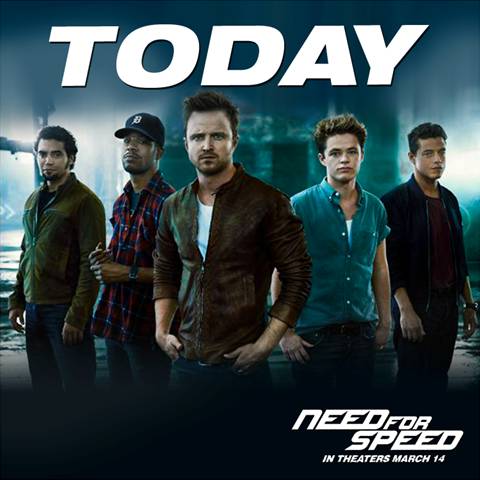 NEED FOR SPEED (In RealD, 3D and Other Large Formats)

Based on the video game series created by: Electronic Arts

The film centers around Tobey Marshall (Aaron Paul), a blue-collar mechanic who races muscle cars on the side in an unsanctioned street-racing circuit. Struggling to keep his family-owned garage afloat, he reluctantly partners with the wealthy and arrogant ex-NASCAR driver Dino Brewster (Dominic Cooper). But just as a major sale to car broker Julia Maddon (Imogen Poots) looks like it will save Tobey’s shop, a disastrous race allows Dino to frame Tobey for a crime he didn’t commit, and sending Tobey to prison while Dino expands his business out West.

In an exciting return to the great car culture films of the 1960s and ’70s that tap into what makes the American myth of the open road so enticing, “Need for Speed” chronicles a near-impossible cross-country race against time — one that begins as a mission for revenge, but proves to be one of redemption.

“Need for Speed” is presented by DreamWorks Pictures, produced by Patrick O’Brien, John Gatins and Mark Sourian, and directed by Scott Waugh. The screenplay is by George Gatins. The story is by George Gatins & John Gatins, and, based on the video game series created by Electronic Arts. The film releases in U.S. theaters on March 14, 2014.