Get a FREE CHIMPANZEE Family Activity Book which has really fun games, mazes and coloring sheets that also help teach kids about these amazing animals!

CHIMPANZEE Educator’s Guide which is perfect for teacher and parents who home school their children! 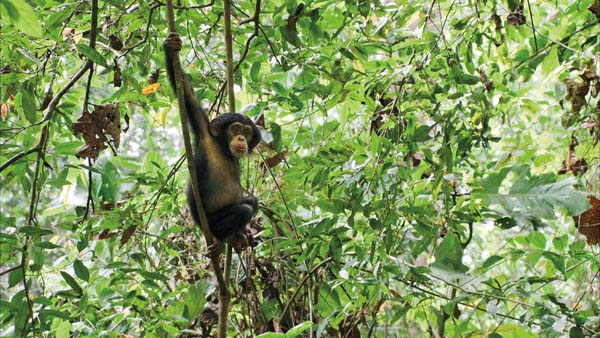 Disneynature takes moviegoers deep into the forests of Africa with “Chimpanzee,” a new True-Life Adventure introducing an adorable young chimp named Oscar and his entertaining approach to life in a remarkable story of family bonds and individual triumph.  Oscar’s playful curiosity and zest for discovery showcase the intelligence and ingenuity of some of the most extraordinary personalities in the animal kingdom. Working together, Oscar’s chimpanzee family—including his mom, Isha, and the group’s savvy leader, Freddy — navigates the complex territory of the forest.    The world is a playground for little Oscar and his fellow young chimps, who’d rather make mayhem than join their parents for an afternoon nap. But when Oscar’s family is confronted by a rival band of chimps, he is left to fend for himself until a surprising ally steps in and changes his life forever.  Directed by Alastair Fothergill (“African Cats” and “Earth”) and Mark Linfield (“Earth”), “Chimpanzee” swings into theaters on Earth Day 2012.

·         “Chimpanzee” is the fourth release for Disneynature, the first new Disney-branded film label from The Walt Disney Studios in more than 60 years.  The label was launched in April 2008 to bring the world’s top nature filmmakers together to capture a variety of wildlife subjects and stories.

·         The first three releases under the Disneynature label—“Earth,” “Oceans” and “African Cats”—are among the top four highest grossing feature-length nature films of all time.

In theaters Earth Day 2012, Disneynature’s newest True-Life Adventure introduces Oscar, a young chimp whose playful curiosity and zest for discovery light up the African forest until a twist of fate leaves Oscar to fend for himself with a little help from an unexpected ally.