Dora the Explorer has always been a favorite in our family. My oldest is 9 – and I still remember watching them with her. Now I enjoy watching Dora with my youngest and seeing all of the new cute and fun episodes that they have came out with. Dora the Explorer: Dora’s Magical Sleepover is a fun filled DVD with three great adventures. My kids love them and this DVD is a big hit with them. 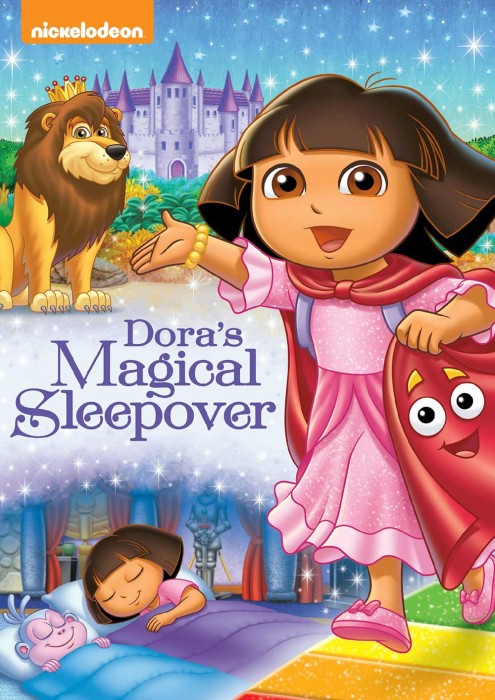 Dora the Explorer: Dora’s Magical Sleepover Episodes: Dora’s Museum Sleepover AdventureJourney into a painting with Dora, Boots, and Diego on their quest through a world of giants, unicorns, knights and more!  The trio must return Prince Miguel’s magic cape to the castle to break the spell that has turned him into a lion. Dora’s and Sparky’s Riding Adventure!After Dora helps Sparky the horse feel better, she needs to take him back to the barn.  She will need the viewer’s help to avoid prickly bushes, falling rocks and Swiper too.  Dora’s Super Soccer ShowdownGet ready for a big game in Brazil with Dora and the Golden Explorers as they take on a team of monsters in the Big Cup Soccer Tournament!

comes out June 24! You can order your copy now.

We are working with Nickelodeon to give one lucky ready the Nickelodeon Dora the Explorer: Dora’s Magical Sleepover DVD. Please wait for the Rafflecoptor to load and enter below. All entries are verified. Must be 18 or older to enter. Open to US only. Contest runs through 6/26. Winner will be emailed and have 24 hours to respond for a new winner will be chosen. Good Luck!

About NickelodeonNickelodeon, now in its 35th year, is the number-one entertainment brand for kids. It has built a diverse, global business by putting kids first in everything it does. The company includes television programming and production in the United States and around the world, plus consumer products, online, recreation, books and feature films. Nickelodeon’s U.S. television network is seen in almost 100 million households and has been the number-one-rated basic cable network for 19 consecutive years. Nickelodeon and all related titles, characters and logos are trademarks of Viacom Inc. (NYSE: VIA, VIA.B).  About Paramount Home Media DistributionParamount Home Media Distribution (PHMD) is part of Paramount Pictures Corporation (PPC), a global producer and distributor of filmed entertainment. PPC is a unit of Viacom (NASDAQ: VIAB, VIA), a leading content company with prominent and respected film, television and digital entertainment brands. The PHMD division oversees PPC’s home entertainment, digital and television distribution activities worldwide. The division is responsible for the sales, marketing and distribution of home entertainment content on behalf of Paramount Pictures, Paramount Animation, Paramount Vantage, Paramount Classics, Insurge Pictures, MTV, Nickelodeon, Comedy Central and CBS and for providing home entertainment fulfillment services for certain DreamWorks Animation Home Entertainment titles. PHMD additionally manages global licensing of studio content and distribution across worldwide digital and television distribution platforms including online, mobile and portable devices and emerging technologies.