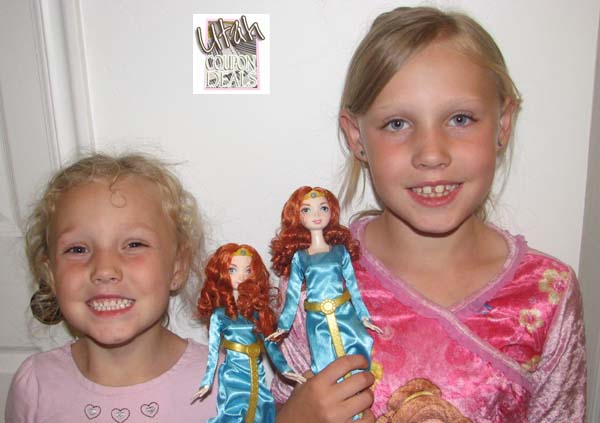 I was able to take my family to the BRAVE Movie pre-screening on Wednesday night. We were able to arrive early and Radio Disney had set up and were playing games and giving out prizes to the kids, so that created a lot of excitement leading up to the start of the movie. They each got a small poster, coloring book and a couple other small handout things. They all loved it. Their Grandma also got them each one of the cute BRAVE dolls that they are showing off in the picture above.

The movie itself was very good. I loved the beginning of the movie and that caught my attention. It continued to get better throughout and the ending was great! Merida is an independent brave young women who is being brought up as a princess. She would rather be doing other things like riding her horse and shooting her bow. 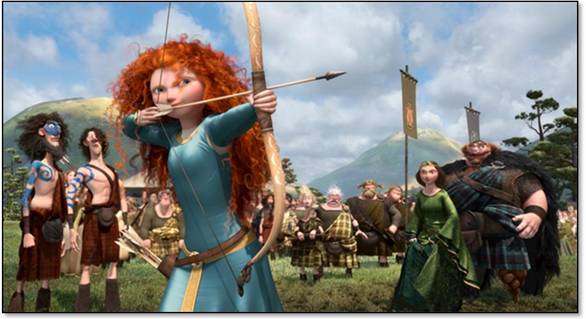 It is a great movie about helping not just girls, but everyone, even adults, learn about seeing things from someone elses point of view and trying to understand how they feel. It is also about standing up for what you believe in and making sacrifices. We all loved the movie BRAVE and thought it was GREAT!

(note: there were a couple of parts in it that surprised me, like it showed bums in one scene for like 2 seconds, and then another one that showed a little “bear” diving for a key into a ladies bosom, and one where one of the fathers lifts up his kilt and moons the others, but other than that they movie was very clean and great!)

We were also able to see it in REAL 3-D and I LOVED IT!!! I thought it made the movie feel very life-like and I loved the dimension to the movie. They was not a lot of “popping out” action, but the effect of the 3-D was great. The animation, voices, directing and everything else was very well done.

Since ancient times, stories of epic battles and mystical legends have been passed through the generations across the rugged and mysterious Highlands of Scotland. From Disney and Pixar, a new tale joins the lore when the courageous Merida(voice of Kelly Macdonald) confronts tradition and challenges destiny to change her fate.

“Brave” follows the heroic journey of Merida, a skilled archer and headstrong daughter of King Fergus (voice of Billy Connolly) and Queen Elinor (voice of Emma Thompson). Determined to carve her own path in life, Merida defies an age-old custom sacred to the unruly and uproarious lords of the land: massive Lord MacGuffin (voice of Kevin McKidd), surly Lord Macintosh (voice of Craig Ferguson) and cantankerous Lord Dingwall (voice of Robbie Coltrane). Merida’s actions inadvertently unleash chaos and fury in the kingdom, and when she turns to an eccentric Witch (voice of Julie Walters) for help, she is granted an ill-fated wish. The ensuing peril forces Merida to harness all of her skills and resources – including her clever and mischievous triplet brothers – to undo a beastly curse before it’s too late, discovering the meaning of true bravery.

I was able to go to the pre-screening of BRAVE in return for this review and promotion, but everything this did not influence my opinions and they are 100% my own.